With more than 120 distilleries in Scotland, visitors have plenty of choices of where to enjoy either single malts or blended whiskies (the Scots skip the “e” found in the American spelling).

The hot bed of smokier, peatier whiskies is the Isle of Islay, located about a two-hour ferry ride off the west coast of Scotland. We took the ride across on the well-appointed ferry and enjoyed a couple of days while staying in a converted farm house overlooking fields filled with sheep, including plenty of spring lambs.

For our Scotch fix, we headed across Islay to the southeastern coast where three famous distilleries are located near Port Ellen. NEED MAP. The three distilleries, including Laphroaig—holder of the Royal Warrant from Prince Charles—were all established around 1815. In addition to Laphroaig, we also visited Ardbeg and Lagavulin.

We toured and tasted at Laphroaig and sat down for a tasting in the café at Ardbeg. Lagavulin is set up for tasting only as part of a tour that we could not fit into our schedule. Reservations, particularly during busy peak season, are necessary to ensure a tour and tasting. We visited six distilleries and took three tours—we would recommend Laphroaig for its value at 10 pounds and what you see and taste. 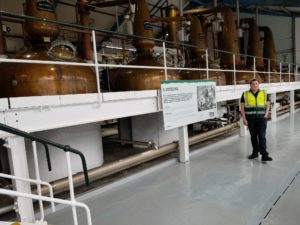 The stills at Laphroaig

Laphroaig mixes historic brewing practices with modern stainless steel tanks for the malting that can be cleaned and ready for the next batch in 20 minutes run by a worker at a computer station as compared with two hours for wooden tanks that involves hand-labor with a worker brushing down the tanks from inside.

The traditional approach is maintained by Laphroaig processing 20 percent of its barley to prepare it for malting. It’s the rare distillery that doesn’t buy all of its barley already malted at one of the other facilities. The traditional Laphroaig method involves soaking the barley in water from the Kilbride Stream for two days and then managing the sprouting by turning it several times daily for six days (three by hand with the traditional tool and three by machine).

The barley then is pumped onto another floor where it is smoked for 17 hours with a peat-fueled fire that embeds the smoky taste into the grains. It’s that smoky flavor that endears Islay whiskies to fans around the world. Laphroaig maintains its own peat land and still hand cuts its peat with a traditional tool before drying it for three months to prepare it for the kilns that date to the 1840s. 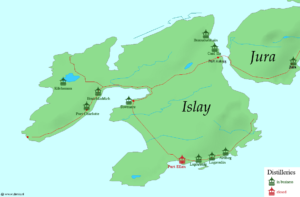 The handwork is done with machines grinding the grain into grist for the two-stage process to turn it into beer and then wine in the copper still before it is finished in the final copper still. It’s 63 percent alcohol when it finishes in the still and then is cut with water before being moved into used American bourbon barrels for 10 years or more aging. Some undergoes additional aging in sherry barrels.

The four-story historic warehouse, with its two-plus foot thick stone walls, is ideal for aging with its constant temperature so losses to evaporation are only about 2 percent a year. Contrast that with a warehouse that is not temperature-controlled where the losses can reach 8-10 percent annually.

We then finished our tour with tasting two or three of six whiskies. Three took two of the three tokens that were provided with the tour. The museum and tasting area are complemented by a bar offering full drams (25 mil, about .85 ounces; samples are 15 ml). That’s a good size, particularly at Ardbeg where the tasting flight had no offerings at less than 90 proof and one that was 115 proof. 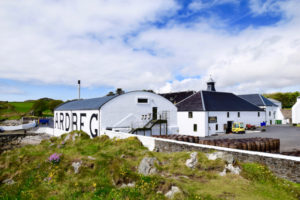 Typically, at each distillery there are many bottlings (like at wineries) that are not distributed nationally or internationally and thus only available there. My choice for Ardbeg would the An Oa that is finished in a gathering vat with oak staves from various types of barrels. The result is a smoky, yet smooth whisky at about 94 proof.

For Laphroaig, with Prince Charles’ favorite simply outside our budget, we opted for the Lore, a blend of five different barrels at 96 proof.

Tastings done, it was time to visit ruins from the 15h century and then off to dinner and the chance to enjoy two other Islay single malts.

On our departing day, the ladies toured Bunnahabhain, which makes gin as well at whisky. Fortunately, there was a comfortable tasting area where I hung out to write this and then sampled a few of their whiskies. A favorite was the Port Charlotte Heavy Peated Islay Single Malt, although they had two single barrel selections that patrons could pour into a bottle and then have sealed and take home. It was a popular options for a few parties while I was there.

The ladies liked the gin tour and remarked that the distillery has one full-time person whose job is to gather the herbs and berries that flavor the gin. Gin also is a profit center—ready to go to market in a week instead of a decade.

With a change in ferry schedules, we had time for a stop at Bunnahabhain near the ferry terminal. The tasting room was tucked into a small room amid the production facility that was being rebuilt. The team here makes a variety of experimental whisky blends to set it apart from the traditional Islay peated whisky. As the gent pouring samples remarked, some work for some palettes and some simply do not. His frank discussion was interesting, but you do not have to put this one of your “must list.” It’s at the end of a four-mile single track road that serves 18-wheelers as well as whisky lovers and local farmers.

Dining options are limited on Islay, which has a year-round population of about 3,200. One place to put on your list is the Bridgend Hotel. We dined there on a Sunday evening and were well taken care of by the personable Eithena, a native of Glasgow who relocated to the isle 12 years about with her man.

We arrived about 30 minutes early for the dinner seating, but she provided us with menus for both the bar and the dining room and said the chef would be happy to take our orders early and seat us in the dining room. Both were good choices and the bar had an ample selection of Islay single malts (eight distilleries) plus a solid wine list with selections from France, Italy, Chile, South Africa and Wente Vineyards in the Livermore Valley (a Beyer Ranch cabernet sauvignon). 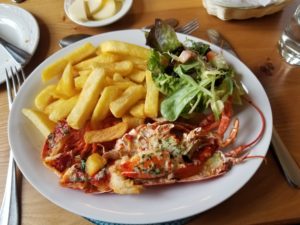 Being in distillery country, I enjoyed a Languelvin 12-year-old (smoky and balanced) and a smooth Bunnahabhain 12-year-old that carried much less smoky flavor than many single malts from Islay, which is renown for that flavor in its whisky. My ladies both enjoyed local gin with tonic (one flavored with elderberry that complemented the gin perfectly).

The restaurant, which has won several awards for its cuisine, sources as much locally as possible. That includes local oysters, scallops, crab, langoustino and lobster from the sea with local lamb and beef and vegetables. The menu proudly lists their purveyors.

We opted for three starters: local crab bisque, scallops bedded on pureed fresh peas with bacon, and thinly sliced smoked venison with pickled woodland mushroom salad and parsnip crisps (an ideal use for parsnips). The scallops were the highlight, although the venison and salad were also tasty. You could not go wrong with either choice. 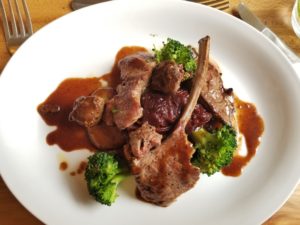 The entrees, our daughter tried roast breast of pheasant and woodcock with root vegetables, woodland chips and pancetta in a madeira reduction. The woodcock, which lives in brackish water, showed that taste, while the pheasant was tasty over the mushrooms.  Not something to order again.

My bride selected the roast lamb special with pieces of the leg, a small chop and a selection of organ meats that made a round-trip back to the kitchen. The red onion chutney complemented the lamb beautifully, while fried potatoes and four flowers of broccoli surrounded the lamb. If we return to Islay, the hotel is on our list and the lamb, absent the organ meats, would be high on the list. 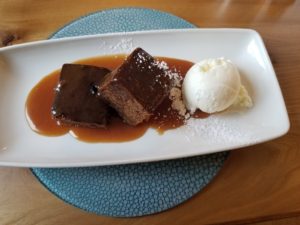 Like the lamb, there was a half-lobster special. And, unlike Maine where you can find complete steamed lobster dinners for $20-$25 dollars, this was 29 pounds (about $36). The lobster was cooked perfectly and then meat removed, sliced and placed back in the shell with a seasoned butter mix over the top. Definitely order this one again. It was accompanied by a small green salad and a large portion of perfectly cooked chips. 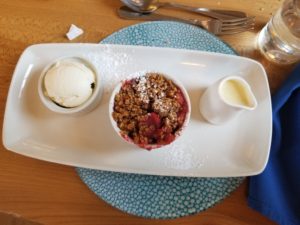 The desserts all hit a sweet spot. After trying a bite of sticky toffee cake in the afternoon, I opted for that which was delightful with caramel sauce and a scoop of vanilla ice cream. My daughter opted for an apple/bramble (a berry) crisp with vanilla sauce and ice cream, while my bride selected a panna cotta with a bramble berry crumble—another hit.

One of the highlights of the meal was the home-baked bread. The first was seasoned with thyme and red onions—Wow, while the second was a whole grain wheat. The remaining two slices, after a re-fill, went home for breakfast toast.