Each home game, Olguin and his wife drive from Merced to Oakland and enjoy the experience as part of the “Raiders Gaters D Block.” The routine is the same each trip and it is something Olguin cherishes.

“We meet at the same gas station across the street from the stadium and get our cars lined up,” said Olguin. “The gates open at 8 p.m., we get in, line up our cars – the Sheriffs do a great job helping line people up – and then everyone knows their jobs.”

“The tents go up, the tables are set up, then the food goes on,” said Olguin. “Breakfast comes first and you can smell the chorizo and eggs. Then the music starts and we all just fall into our groove.” 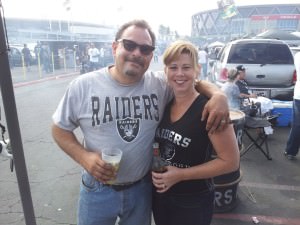 The group is run by Scott Fareas and Fareas controls the menu for each game. The group has a Facebook page and it’s there or through e-mail that members know what to bring.

“(Fareas) will notify people or post on Facebook that say we are having a Cajun-theme, so bring a Cajun dish,” explained Olguin. “There is always tri-tip, ribs and chicken and some theme. We are just one big happy family that feels the love for the Raiders.”

There is a van with three TV’s and a DJ spinning the tunes. There is something for everyone. The party lasts up until kickoff is close and sometimes continues after the game.

“Some people will stick around and have their celebratory drink or their sad drink,” said Olguin. “I try to get out pretty close to the end of the game as I have so far to drive.”

One thing that Olguin almost bristles at is the perception that if someone wearing an opposing jersey ventures on to the property, they are taking their lives into their own hands.

“I have never seen anyone jumped or anything when they have the opposing jersey on,” said Olguin. “The parking lot is so mellow – we have people tailgating with us that are rooting for the other team every week. The only time I have seen something happen inside at a game is when the opposing fan takes it too far. My wife has never been afraid to come to a game. As fans we self-police and make sure everything is cool.”

The big questions that looms for the Raiders Nation is, how will you feel if the team goes back to Southern California, Las Vegas, San Diego or San Antonio?

“I can’t believe they will leave,” said Olguin. “This is their home, where they belong. I bleed Silver and Black. I followed them when they were in LA before and I will if they leave again. Raiders’ fans are old school – we’re like a wet dog. You can kick us and we keep coming back. Always a Raiders’ fan.”