The COVID-19 crisis has forced some significant changes in how golf courses operate and what they need to do to maintain golfer safety.

One shift eliminated people riding together in a golf cart unless they live in the same household. That effectively cut the cart fleet in half for golf courses. That’s why most courses have caveats on their website that carts may not be available. It’s unlikely that operators will want to expand their cart fleets–most have limited storage and charging stations.

Thus, one challenge becomes an opportunity for others.

Enter GolfBoards. The single-rider motorized boards can go anywhere on the golf course and define social distancing. Since their introduction a few years ago, many courses have offered them as an alternative to walking or the standard golf cart.

The Bend, Oregon-based company shot out a press release inviting course operators to consider their alternatives. They also have some competition in that single-rider space that they pioneered.

Please continue reading to learn more about GolfBoards in our original post that has been updated.

I have been intrigued by the latest innovation in golf transportation—GolfBoards—since I read a feature on them in the Wall Street Journal last year.

In the fall 2015, in the Bay Area, the Marin Country Club has two boards that have proven popular to the membership with golfers over 70 years of age riding them. The other Bay Area site with them is Coyote Creek in Morgan Hill along the 101 (there are holes on both sides of the freeway). The boards cost $13 to rent in addition to the green fee.

This year, Callippe Preserve Golf Course in Pleasanton added the four GolfBoards. Eric Thompson, the general manager, said they bought the board and they have proven popular in the summer once the course dried out and the cart-path only restrictions were lifted. Callippe charges $10 more than a cart rental for the boards, a better deal than I found in the Palm Springs area.

In November 2015, when I saw that the Palm Springs’ municipal course Tahquitz Creek offered Golfboards, we had to try them. You had to watch a short video, sign a release and pay $35 for the golf boards. The Indian Wells resort, which now offers the GolfBoards (Tahquitz Creek did not renew its lease) also charges $35 extra.

Thanks to help from the Tahquitz pro shop, we played the Legends course instead of the Resort course Thanksgiving week at the facility that opened in 1959. It was the first day the Legends had re-opened after the fall over-seeding so it was cart-path only except for those walking or golf boarding.

The GolfBoards proved to be fun, challenging and quite efficient when I jerked a shot left and my bride pushed one right. It took a bit to get the hang of operating the boards—you change direction by shifting your weight just like you would on a snowboard or skateboard.

As a long-time skier, I was quite comfortable with my feet side-by-side under my shoulders and shifting my weight in a familiar way. That’s not the recommended approach on the GolfBoards that recommend the snowboard stance. 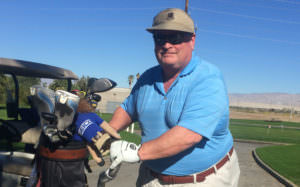 Once I settled into the routine, the GolfBoard was efficient, but physically demanding (and, for those who do not know me, I am not in peak condition—closer to the opposite).

Steering the board required lots of body motion (less once you get into it and make smaller adjustments at speed (like skiing, it is far easier to subtly adjust direction when you have some speed). Bottom line: it was an excellent workout for me in addition to getting off to strike the golf ball. Talking to others that week who had tried the boards found wide agreement on that point.

It also required standing for the entire round, whether approaching and hitting the ball or riding on the golf board. That’s a big difference from a golf cart and I certainly would have appreciated a bench here and there.

Tahquitz Creek, like the Indian Wells Golf Resort and the Cimarron Resort take advantage of the big wash that is its namesake. The course suffered lots of damage in the torrential August rains in 2013 that wiped out fairways and more. The course was in excellent shape—as you would expect—with rough that was higher than is probably normal as the superintendent was letting grass grow in more before starting to mow it.

The views, once you lift your eyes above the houses that surround much of the course, are the stunning San Jacinto Range (they had some snow after the Thursday/Friday cold front came through). The clubhouse was remodeled in 2012 and the course now offers a buffet for breakfast and lunch (until 3 pm) with a paid round. The grill has other options, but when we played, the free buffet featured pork riblets, chicken breasts in barbeque sauce, green beans, rice and an ample salad bar. There also is a breakfast buffet and the package includes a draft beer or a glass of wine.