Todd Fischer, a former full-time player on the PGA Tour, played in the U.S. Open at Pebble Beach in 2000, recording a hole-in-one on the 7th hole in the second round.

He has done several instructional videos for ACES and we anxiously await him turning 50 in two months and heading out on the Champions Tour. I had a chance to get to know Todd when I was a local sportswriter covering him when he was playing for Foothill High in Pleasanton.

Recently I sat down with Todd and broke Pebble down hole-by-hole for how to play it this week, especially as compared to the AT&T. I hope you enjoy Fisch’s commentary! Take it over Todd! – Dennis Miller

My experience is that it is not as bad as everyone makes it out to be between the AT&T and the U.S. Open. Because the rough is so much thicker, the fairways are more defined, and it makes picking out your targets easier. Sure, it’s tighter, but it is much more defined.

The conditions are not even comparable – it’s a different course for the Open. The AT&T is all carry whereas in the Open the course is firmer, and the ball will go further in the fairways. In fact, this is a U.S. Open where hitting driver is not necessary.

It’s not the longest course, but it’s all the tiny little greens that make the difference.

The first seven holes are where you can score. You must play those holes under par if you want to contend. 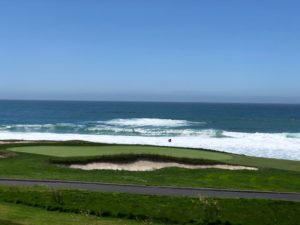 1st hole (380 yards, par 4): These guys are so strong and hit it so far, they will all be hitting long irons and 3-woods off the tee down the left side of the fairway and cut it up the gap.

2nd hole (516 yards, Par 4): I am not sure how much narrower the fairway will be because of the bunkers they have out there, but it’s straightforward- hit the driver down the middle. This is one of the holes you don’t want to miss the fairway because of the length. Do it and you won’t make par.

3rd hole (404 yards, Par 3): I am thinking some of the guys may even try to drive it. I would hit a driver over the corner. I am still going to have a wedge in my hand for the second shot. You have that out of bounds past the green. Some may want to lay back and have 130 yards into the green.

4th hole (331 yards, Par 4): Some guys will rip the driver right up the gap. This another scoring hole. You are going to have either a wedge or a 9-iron in your hand for the approach.

6th hole (523 yards, Par 5): This is the easiest hole on the course – it’s a birdie hole. Drill it down the fairway and always go for it. If you play it safe, you are already at the top of the hill, so why not play a little more and go for it. 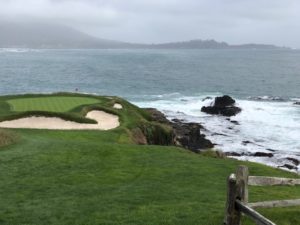 7th hole (109 yards, Par 3): It’s right in front of you. The elevation and the wind can cause problems. It can blow 20 miles an hour into your face and you can’t go over the green because of the ocean. You just don’t want to mess up because it’s so easy.

8th hole (428 yards, Par 4): Now the fun starts. I try to get as far down there (by the cliff) as I can. You are down below for the tee shot so you can’t get a feel for the wind. You try to get a feel when you are on the 6th green for the wind. The second shot doesn’t play as much downhill as you think. I play to the front part of the green as you don’t have a lot of room to miss. You really just want the front third of the green. If you par this and the next two holes, you are happy.

9th hole (526 yards, Par 4): Man, you just want to hit it as far as you can. You want to play the left side of the fairway because of the slope. It’s another tough green to hit and you don’t want to be long here.

10th hole (495 yards, Par 4): Down the left side, as far as you can as well. I don’t think they will narrow these fairways down too much and you should have a short iron in your hand for the second shot.

11th hole (390 yards, Par 4): This is a little breather time. I am thinking they will bring in the rough here. It’s a long and narrow green. You always want to be below the hole here.

12th hole (202 yards, Par 3): It’s a bitch of a hole. You can’t hold the green on an all-carry shot so try to go through the narrow front gap. The front bunker is not the worst place to be.

13th hole (445 yards, Par 4): Another hole where you get a breather. The wind comes in from the left. You fire it up the right side of the fairway as you’ve got to get into a good spot.

14th hole (580 yards, Par 5): I used to go over the corner and try to keep out of those bunkers. Some of these guys will be able to do that without a problem. The green is much easier than it used to be since they have redone it. It’s an easier hole now. 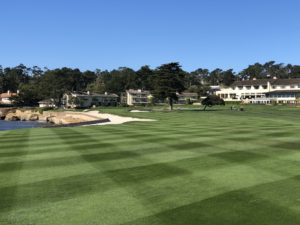 15th hole (397 yards, Par 4): Another little breather. Just hit the fairway with an iron or wood and keep it out of the one bunker (in the middle of the fairway).

16th hole (403 yards, Par 4): I would think they won’t drive to the bottom of the hill but lay back some here. It used to be that if you drove to far left it was a lot of trouble. If the pin is on the left, it’s an easier a green.

17th hole (208 yards, par 3): It’s actually like two greens and you go at it each time. A front right pin placement is much easier. If it’s on the left, the front bunker is not a bad place to be.

18th hole (543 yards, Par 5): Some guys may not need more than an iron or a 3-wood. I hit a driver down the left and cut it back in there. You don’t necessarily go for it every time as the tree by the green doesn’t really come into play unless you go for it.