Kingsbarns Golf Links on the east coast of Scotland will celebrate a milestone this week Aug. 3-6) when the Ricoh British Women’s Open is held on the seaside track.

Kingsbarns has ties to the Bay Area. It was developed and owned by Pleasanton businessmen Art Dunkley and Jim Tong in partnership with Granite Bay developer Mike Parsinen. They built the property, where golf had been played since 1793, in the late 1990s. They rushed to get it open in time for the 2000 British Open that was held seven miles away at St. Andrew’s.

Since that opening, it has received numerous accolades and it ranked as the No. 1 modern course in the United Kingdom as well as on many top 100 lists. It is considered a “must play” for any golfer visiting St. Andrew’s and has received rave reviews for the course, its impeccable conditions and the high levels of service by the staff. 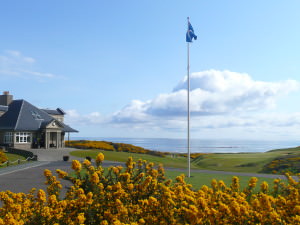 The clubhouse at Kingsbarns

The highlight will be next week when the best women golfers in the world play the British Open there Aug. 3-6. The major will cause the course to close for two weeks this season. It has been one of the three sites of the Alfred Dunhill Links Championships, the European Tour’s version of the AT&T National Pro-Am here on the Monterey Peninsula each February.

For the 15th year, Kingsbarns, the Old Course at St. Andrews and Carnoustie will host the pros and their celebrity amateur partners Oct. 5-8th.

When I was in touch with Art Dunkley by email, he took pride in pointing out that the course conditions at Kingsbarns are so fine day-to-day that tour officials only require a few days to ready it for the pros. That stands in contrast to many venues in the Unites States that are closed for two or more weeks prior to the pro events and often restrict golf carts to the paths for weeks before that. Of course, in the British Isles, golf is a walking experience with carts limited to people with a written note from their physician.

Being a Dunhill site, earns Kingsbarns plenty of television time each fall as Golf Channel broadcasts the event. The links course, unlike many of the older courses, has 1.7 miles of seashore that designer Kyle Phillips and Parsinen took full advantage of to create wonderful views and challenging holes. Six holes run along the beach and all 18 have views of the ocean. 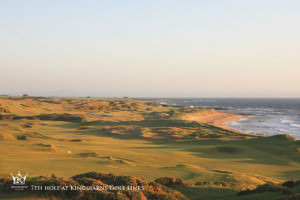 The view from the 7th hole

EDITOR’S NOTE: ACES has written several times about Kingsbarns over the last several years. Here are some notable highlights from past reports.

“This year’s tournament (for the 15th year in a row) has been particularly enjoyable since we’ve enjoyed nice playing conditions with great weather and lots of sunshine; the best possible conditions in early October to showcase what Scotland has to offer the world of golf.

“This has been another exciting season at Kingsbarns.  Earlier, The Open Championship at St. Andrews brought 200,000 golf fans to the area in July.  Prior to this year’s Open, our tee sheet had been sold out almost a year in advance for that week since lots of spectators also wanted to play golf in the area.

“In addition to having great professional golfers and skilled amateurs playing Kingsbarns, hosting an important European Tour professional tournament annually keeps our course in tournament-ready condition year around.  We only close for special maintenance one day in advance of the Dunhill event since our greens and overall course condition is maintained to a high level throughout our season.  in Our daily golfers seem to enjoy the results of our greenkeepers’ attention and this conditioning has helped earn our Top 100 Worldwide course rankings every year since we opened. 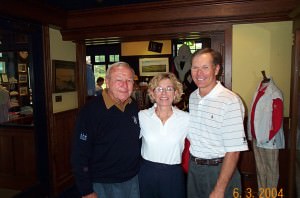 Art and Tuny Dunkley with The King

“Against this background, you can understand why it’s a pleasure to spend time in St. Andrews and at Kingsbarns.  Our involvement with Kingsbarns has proven to be a life-changing experience and introduced us to lots of wonderful golf friends.”

The course is named for the barns that once held the crops paid to the King as taxes.

The development team executed a 200-year land lease with the lord of the manor and began construction in late 1997. They had to hustle because grass grows very slowly at latitudes north of Moscow.

During the construction of no. 18, they had planned to build a stone bridge over a creek in front of the green. While excavating, workers found an older stone bridge. They changed plans, lowered the green complex so the old bridge is in use today. 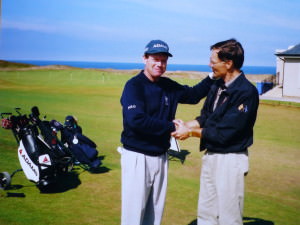 Among the first players after the opening was Tom Watson, a legendary links player and five-time champion golfer of the year. He put his clubs on a pull-cart and went out and played.

That wasn’t the first round nor the first celebrity visitor. About four months before opening day, Art received a call from an R&A official asking if Prince Andrew could play the course. The Kingsbarns team mowed the greens and cut the holes. Art, the only partner available, then played with the Prince. After four holes, the Prince thanked Art for clearing the course—he then confessed it was not open yet.

The partners invested about $8.5 million in the course. Kingsbarns is closed for maintenance and because days are very short from November to March. Current green fees are 240 Euros or about $270 with the recommended caddies at 55 Euros plus tip.