The two-week Sonoma County Fair horse racing meet is rapidly approaching and for his 10th straight year, iconic and internationally known announcer Michael Wrona is back to call the races.

The meet will take place for the first two weeks in August, running Thursday to Sunday, August 2-5 and August 9-12.

The Sonoma County Fair is one of the top two Fair meets in Northern California along with the Alameda County Fair in Pleasanton. Santa Rosa also has the luxury of having a turf course, the lone one on the Fair circuit.

Having Wrona in the booth is another big selling point for the Santa Rosa meet as Wrona is certainly in the conversation as one of the best race callers in the United States. The voice of Santa Anita makes the trek north each year to spend a couple of weeks in Santa Rosa. 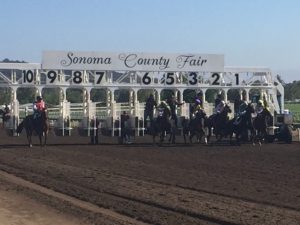 “I enjoy the change of environment,” said Wrona of coming to Santa Rosa. “At most tracks I am isolated in a room and I might as well be talking to myself. I enjoy the intimacy of calling the races at Santa Rosa. It’s a refreshing area and I have made some good friends there. If my schedule allows me to do so, I will keep coming back.”

Santa Rosa racing has been blessed, as Frank Mirahmadi was the caller before Wrona, meaning the track has had two elite announcers calling the last 11 years of racing. The two were also the finalist for the job at Santa Anita. Mirahmadi is currently the voice of Monmouth in New Jersey.

As the Racing Publicist for the Sonoma County Fair I have had the absolute joy of working with Wrona the last seven years and have worked with Mirahmadi as well. I consider myself blessed to call them both friends.

Wrona has been a wonderful addition to follow Mirahmadi who made a big impact in the Santa Rosa racing community. Wrona is a genuine person and carries a sense of humor with him whether he is calling a horse race or just hanging out in the press box.

Another enjoyable aspect of working with Wrona is there are no pretenses and no ego which is not always the case in the industry. He is a legit, down to earth person and is more than willing to go quaff a pint at a local brewery following the races.

Wrona is a different breed, someone that truly loves the sport – have a beer with him and listen to his incredible stories. He also willingly embraces all aspects of Fair racing. His calls during the Derby Dog Dash that takes place each Sunday of the Fair are classic as well. 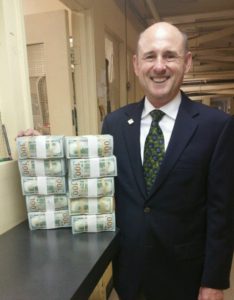 There was one year when a dog named Pliny the Younger, after the famed beer from the Santa Rosa based Russia River Brewing Company, was all over the track. To the delight of the crowd Wrona suggested the dog be tested after the race.

“It’s a big part of the Fair,” said Wrona of the dog races. “I think the only way you can approach it is to have fun.”

Wrona has spent over 25 years in the United States since he left his native Australia. In that time, he has called races at Hollywood Park, Bay Meadows, Golden Gate, Retama Downs, Arlington Park, Lone Star and the Fair Grounds.

He has made some calls for some big moments in racing.

“I have been in and out of a few booths, however I have been fortunate to be in the booth for some statistically important races,” said Wrona of some of more memorable moments. “I have been very privileged to be there for those races.”

In 1995 Wrona had the call for the Arlington Citation Challenge, a special event at Arlington International Racecourse in Illinois created to lure Cigar as he went for his 16-straight win, a win tied him with Citation for consecutive race wins.

“That race rates really high as it drew a massive crowd and it was an electric atmosphere,” said Wrona of the Citation Challenge that was broadcast on CBS. “I had the window open at Arlington and the crowd was so loud.”

In 1999, Wrona was calling the races at Hollywood Park in Southern California when he was in the booth for Laffit Pincay’s historic 8,834 career win, a number that moved him past Willie Shoemaker into the No. 1 spot for career wins.

“That was a high-profile moment,” said Wrona of the call. “As you know, those things can drag on for days when you are waiting for a record to be broken.”

In 2013 Wrona went back to Hollywood Park for the final day of racing for the facility before it was shutdown. The memories were resurrected.

“I was down there for the last day and was walking around,” said Wrona. “They were playing race calls for what they determined were the top 10 races run at Hollywood. I was in the paddock when I heard my call. It made me understand how historical that call was and what it meant.”

As fate would have it, seven years later Wrona was calling the races at Golden Gate Fields when Russell Baze won his 9,531 race, to pass Pincay’s final total.

He has even dabbled in the entertainment world, voicing a call for a Seinfeld episode in 1992 called “The Subway.” In the show Kramer overhears a tip while riding a subway train.

All those great calls, many at great tracks, and for the next two weeks Wrona will once again be calling the races at the Sonoma County Fair and doing so with the charismatic style he does at Santa Anita.

It speaks volumes for the quality of the Santa Rosa meet, as well as the people in the area. It also plainly says Wrona loves his job.

“As far as race calling I inject the same enthusiasm for every race, where ever I am and it’s not a forced enthusiasm. I honestly have that enthusiasm for every race,” said Wrona. “I love calling races. Even with the long meet at Santa Anita that recently concluded, I was disappointed when it ended, although my voice appreciated the rest! Santa Rosa fits perfectly into my schedule – I will be refreshed and ready to go.”