Let me start by acknowledging that I have been a fan of Total Wine since the company started opening stores in the Bay Area a few years ago.

The pricing model for wine and spirits has caused competitors, including Costco, to lower prices to maintain market share. I have become a regular at the Pleasanton store and attended several of the monthly classes that showcase different wines.

This month, we tried something different—tasting wines to check out Riedel glassware from Austria that is specifically designed for each varietal. Wow—what a difference the shape of the bowl made.

I admit I took the $70 class (it included four Riedel glasses used in the demonstrations) out of curiosity. I had read about Riedel over the years and I vaguely remember receiving a couple of glasses designed for Cabernet Sauvignon in a gift pack.

The enthusiastic Riedel rep, David Christensen, really knew his stuff. He was headed back to his home in Jupiter, Fl after the class, having done Bay Area presentations three nights in a row. Before joining Riedel four years ago, he’d worked 14 years representing upscale wineries  so he had a perfect mix of knowing his product and the wines to drink from it.

Riedel offers several collections, all with the same shape engineering behind them, included hand-blown glass coming from its Austrian factory. The collection we used all come from the mechanized factory that runs 24/7. The family-owned company now is being run by the 11th generation in its 260-year history. It pioneered designing and engineering glasses matched to specific wines 40 years ago.

We used glasses designed for whites such as Sauvignon Blanc (which surprisingly also works well with red Zinfandels David said—the shape tones down the high-alcohol); for oaked chardonnays (most of them unless it is labeled unoaked), for Pinot Noir and Cabernet Sauvignon and Bordeaux varieties.

The Riedel glasses are noteworthy for being light-weight, balanced and perfectly clear. The bowls, width, height, and shape at the thin rim is what sets them apart.

Our collection also included the bowl-shaped utilitarian wine glasses used for Total Wine’s tasting classes. That spare came in handy because we routinely poured the wine we were tasting into it so we could compare.

When we did that with the New Zealand Sauvignon Blanc, it was noteworthy how much better it tasted in the Riedel glass. The same for the Chardonnay, while the Cab, tasted in the Pinot glass, lacked much of the character that flowed through in the original Cab glass.

After 90 minutes, David had demonstrated that the right glass makes a big difference. Riedel suggests you consider what types of wines you drink routinely and then buy the suitable glass. The long-stemmed glasses we used are designed for special occasions, while the stemless goblets that Riedel pioneered when a family-member was living in a small apartment in New York City, are designed for everyday use.

Notably, Christensen strongly recommended washing the glasses in your dishwasher, assuming it can accommodate the long stems (ours could not) because hand washing creates tiny faults that over time will result in the glass failing. When he speaks to restauranteurs, he urges they train their staff to wash the glasswear in the dishwasher and says breakage will drop 15-20 percent with training.

Incidentally, if you are intrigued about the Riedel glasses, check them out online or at Total Wine. The rep frankly noted that Total Wine’s pricing was better his company’s on its website (the box was custom-labeled for Total Wine, an indication of just how much glassware they sell and how many classes they do nationwide). 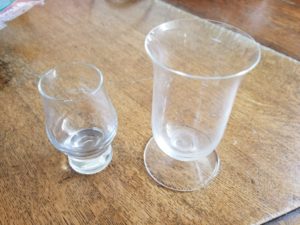 He also said how much of a fan he was of the Coravin wine preservation system that uses a hollow needle to puncture the cork to pour a glass or two of wine and then fills the space with the inert Aragon gas. He has a consulting business managing wine collections for clients and he said they use the Coravin to taste bottles of reds, particularly large format, to determine whether they are ready to drink.

Riedel has a division that is making glasses for specific cocktails and spirits. For single malt whisky in Scotland, we were consistently served in “The Glencairn” whisky glass. He pointed out that that shape was specifically used by blenders because it highlights flaws in the single-malt. Its success is a tribute to clever marketing.

The Riedel glass, by contrast, is flared out at the top and with a deeper bowl. The engineers and designers made it to enhance the single-malt flavors. Trying one I purchased, I would have to agree.