One of Pleasanton’s home-grown restaurants  celebrated a milestone 30-year anniversary in October 2019.

The good news is that nearly two years after the shutdown of March 2020, Strizzi’s still is operating in Pleasanton, Livermore and Fremont.

Strizzi’s has anchored the corner of Main and St. Mary streets since 1989. It was owner Ray Bartolomucci Jr.’s second Strizzi’s location, but he was bringing it to his hometown of Pleasanton. He’s lived in Pleasanton Valley since before opening the restaurant. He and his wife have raised their four children here.

He and his team are throwing 30th anniversary celebrations at all locations: Strizzi’s in Livermore (opened in 1996) and Fremont (opened in 2006) with special menus, special pricing on desserts such as their famous sour-dough bread pudding, wine specials,  dinner and brunch specials and $10 entrees to go.

Opening the Pleasanton site required some extra political exertion. The police chief at the time, Bill Eastman, had prioritized cleaning up Main Street and its bars and drinking on sidewalks. The City Council had passed an ordinance that made drinking alcohol in public a violation, even on private property such as drinking a beer with a neighbor on your front lawn. (To my knowledge, it was never enforced at this level, but it was on the books).

Ray believed that outdoor dining with wine was critical to the success of his new restaurant and went to bat for it. The compromise was putting up the fences on the sidewalk to enclose the tables and paying the city rent for the use of its sidewalks. When the council approved that, it launched the dining scene you see downtown today where it is the rare restaurant that does not offer al fresco dining.

It all started with Ray and Strizzi’s.

His family approach carries over to the menu and wine list. There’s no corkage charge because he and his wife don’t like them so Strizzi’s doesn’t have one. Because the customer experience is paramount, substitutions to menu items are welcome. 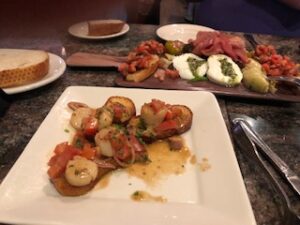 Ray melds his background in corporate and chain restaurant management with strong family values in his restaurant company. They operate three Strizzi’s restaurants (the original in San Leandro opened in 1986 and closed in 2005), plus Rigatoni’s in Dublin, Castro Valley, Hayward and the Rigatoni’s Red Smoke Grill in Hacienda Business Park in Pleasanton.

The family values shine through in several ways—the restaurants are named for his grandfather, Luciano Strizzi and there’s still a mixture of family recipes on the menu. More significantly is the longevity of his team members.  Kelly Morris has served 25 years in Pleasanton, while manager Chris Martinez has been there 20 years. Kelly’s daughter, Emily Wearne, a mother of four, is in her 17th year as is Justine Sieber. Kitchen Manager Andres Hernandez has worked preparing food for 21 years.  Those are impressive years of service in any industry, let alone the restaurant business where it’s easy for people to move.

The restaurant has many regulars so people will call for reservations and request both a specific table and a specific server who will be taking care of them. 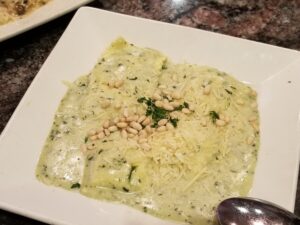 Based on his experience in the corporate world, Ray holds quarterly managers off-site meetings; uses a commercial kitchen off-site for training and offers career paths for employees who want to move up. He opened hotels for the Marriott corporation and was responsible for food and beverage, thus learned to deal with chefs and how to manage expenses. He then worked with the company that owned Horatio’s in San Leandro and Skates on the Bay before deciding to open his own restaurant. One of his keys to success is having relatively small spaces so tables are filled, and rent is minimized.

The menu has shifted over the years. One of my lunch favorites, a bay shrimp and blue cheese salad with slivered almonds, vanished from the menu years ago.  Its absence caused me to enjoy lasagna at lunch instead of my typical salad. 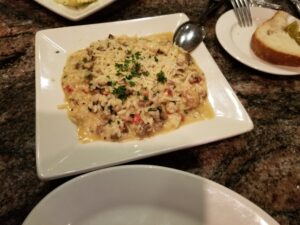 As the demographics shift rapidly in Pleasanton with many more Asian and Indian families moving in, I asked Ray how he was adjusting. In Fremont, where the ethnic mix already has shifted, he’s added a shrimp tossed with spicy Thai curry sauce that would not normally be found in an Italian restaurant, but was selling well. Don’t be surprised to see it in Pleasanton and Livermore.

We dined there on a Tuesday night that was busy with most tables filled and an Indian family birthday party filling up a table for eight. One pleasant surprise was seeing Don and Ann Rathjen and Judy Del Tredici. Judy’s late husband, Rich, taught me freshman English at Amador Valley High in Pleasanton more years ago than any of us want to remember, while Don, also a first-year teacher back then, established the excellent physics program.

To encourage early dining and have the possibility of turning a table on a weeknight, Strizzi’s offers soup or salad with a variety of entrees that range from $16 for Fettuccini Alfredo to $27 for grilled salmon. The early dining chicken is $26 with soup or salad and $27 on the regular menu. 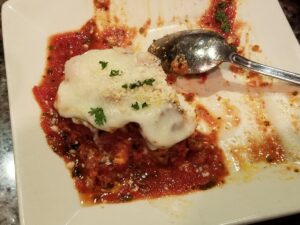 We started with the signature sourdough bread with olive oil and followed that with the excellent scallops Provencal. Bay scallops were dressed with the Provencal sauce and served on bruschetta. It was a perfect way to start. Ray brought us a wonderful antipasto platter with bruschetta, olives, mozzarella with pesto, prosciutto and peppers.

Having enjoyed the marinated and wood grilled chicken on both salads and as an entrée, we opted for small portions to taste pasta dishes. I could not resist the oven-baked lasagna, while my bride selected the Asiago cheese ravioli dressed in creamy sauce with pine nuts.  Our third choice was one of the staples, Italian sausage risotto. All three were excellent choices and showed off the kitchen’s skills.

Ray said they buy their Italian sausage from an Oakland-based company that has been their supplier for years. They have such a good relationship that Ray throws a guys-only holiday party that centers around everyone making their own recipe. The sausage-maker often comes, drinks some wine and enjoys watching the amateurs scramble to achieve what he does daily to the tune of about 5,000 pounds. 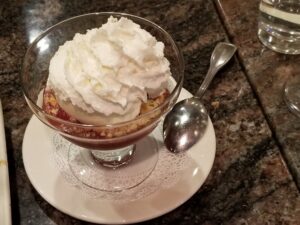 We savored two desserts—the signature sourdough bread pudding with warm caramel rum sauce topped with whipped cream (plenty to share). The same went for the Italian biscotti sundae. The heritage of this dish dates to Ray’s days opening the San Leandro site where he’d been closing up with the lights out and munching on broken biscotti along with white chocolate gelato. The broken biscotti could not be served with an expresso or cappuccino. When he added fresh crushed strawberry sauce and whipped cream and put it on the menu, it was so popular that they had start breaking biscotti so they could supply the diners. 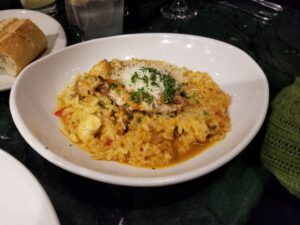 Our daughter, during the shutdown, has enjoyed Strizzi’s to go and cold-prepped entrees throughout the last couple of years, but never had dined there in person. We took care of that in January before enjoying Jeremy’s Stolle’s excellent show at the Bankhead Theater in downtown Livermore. 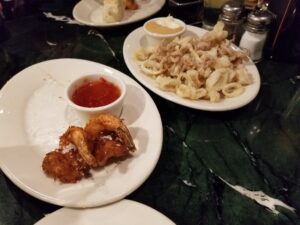 We ordered our standard starter for Italian restaurants, fried calamari, and complemented it with fried cocoanut shrimp. The squid was lightly battered and one of the sauces had a bit of zip to it. Both the shrimp and the calamari were perfectly cooked and the dipping sauce enhanced the crispy shrimp. 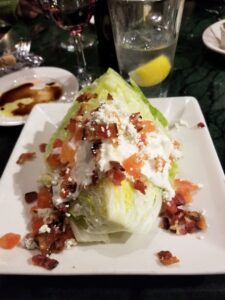 I could not resist the wedge salad with blue cheese crumbles, chopped tomato and bacon dressed in a creamy blue cheese. Yes. The same could be said for the seasonal Fuji apple and walnut salad with spring mix and a raspberry balsamic dressing.

I opted for my normal entrée, lasagna, although there were tempting seafood and grilled options. My daughter’s fiancé choose a chicken risotto, tasty, although he commented it was more like a standard rice  than the creamy risotto. There was no trouble cleaning his plate.

The same went for my daughter and my bride—Rigatoni Bolognese and Pappardelle with Pancetta and Peas. Both hit the spot.

We enjoyed a satisfying and relaxing meal and, despite the carbo loading, were alert throughout the show.

My bride and I ventured to Strizzi’s in Pleasanton in March for a birthday lunch. The outside tables were popular on the sunny day and inside we had our choice of tables.

We decided to take advantage of the lighter lunch specials that come at three prices each with four choices, including the choice of soup or salad. The $16 choices include chicken fettuccini Alfredo, Rigatoni Bolognese, cheese ravioli and Asiago cheese ravioli. The $18 are spaghetti and meatballs, Italian sausage pappardelle, Cajun chicken fettuccini or chicken pesto with pine nuts. The $20 choices include lasagna, chicken parmesan, seafood fettuccini or wood grilled salmon. 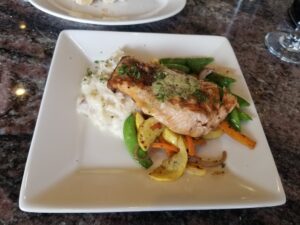 We perused the menu at home so we could decide what wine to bring with lunch (no corkage is charged). I was tempted by my favorite, lasagna, but decided instead on the seafood fettuccini. My bride selected the wood-grilled salmon—she rarely misses the opportunity to order salmon.  We brought along a Lodi chardonnay that complemented each entrée.

I started with my favorite, the wedge salad with tomatoes, blue cheese and bacon. It never disappoints. My bride selected the Fuji apple, walnut salad dressed in vinaigrette. She had admired that choice on a prior visit and delighted in it to start her meal.

Her salmon also hit the mark with a lunch-sized filet served over tasty mashed potatoes. As good as the salmon was, the highlight was the mixed sauteed vegetables highlighted by edible pod peas. It made for an ideal meal and her second clean plate.

The seafood fettuccini was dressed in a cream sauce with perfectly cooked small scallops and shrimp. It hit the spot and was a perfect size for lunch when coupled with the salad. 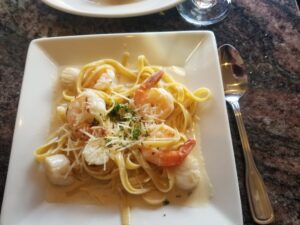 My birthday lunch included a complimentary dessert of my choice—a tough call because Strizzi’s has excellent choices. I went with the tiramisu and was served quite a large portion that finished off a wonderful meal.

My bride went for the white chocolate gelato and was served four scoops, another large portion. Both were easily sharable. 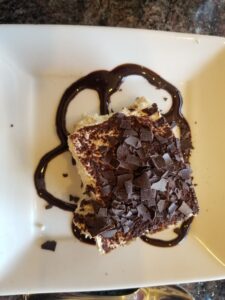 All in all, a delightful lunch in Pleasanton’s oldest Italian restaurant on Main Street.

Strizzi’s is open for lunch Monday-Friday, brunch on weekends from 10 a.m. to 3 p.m. and dinner nightly.

We returned to celebrate our anniversary, walking up on gold in a year. We enjoyed favorites, lasagna and grilled salmon, and I started with wedge salad.

My bride selected the tomato bisque, creamy with an appropriate tomato flavor complemented by a bit of a bite from a chili pepper. As our server joked, she didn’t like it at all as he took away a bowl wiped clean with the French bread.

The menu has been tweaked to eliminate weekend brunch in favor of an all-day menu from opening to closing that is complemented by a short list of lunch favorites– two burgers, a chicken sandwich and 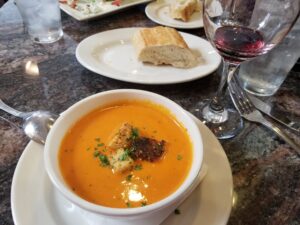 three salads. The popular combo menus– smaller entree with either soup or salad–are limited to four on the lunch menu for $20 with eight options to  chose from on the all–day menu at either $23 or $25. The quality remains as high as ever.