Pleasanton—Hundreds of members of the Club at Castlewood flocked to the hillside venue to celebrate the re-opening of its clubhouse Nov. 12.

The clubhouse opened in 1972 and had not seen significant updates since that time. The club was being pressured by Alameda County to bring the building into compliance with the Americans with Disabilities Act that passed in 1991. The club was rebranded earlier this year to The Club at Castlewood from its prior Castlewood Country Club. The name change was designed to signify it’s now a family-oriented club with something for everyone. 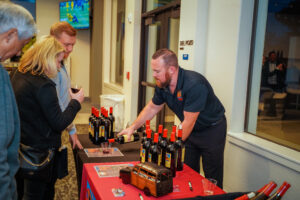 Judging by the wide smiles that most members wore on Saturday evening, they were delighted with the result. Before members decided to renovate the 55,000-square-foot clubhouse, they took two key votes in 2019: 1. To establish a $200/month assessment to cover the cost of borrowing funds over 20 years to pay for the complete clubhouse renovation instead of a lower assessment to remodel to comply with the ADA; 2 To reject a proposal from the Bay Club to take over Castlewood. Bay Club bought out ClubSport in Pleasanton and executives would loved to have added the two 18-hole golf courses and clubhouse to its portfolio.

Since before the Great Recession, Castlewood, like many established country clubs, had seen its membership age and numbers shrink. For instance, in 2019, there were 555 equity members eligible to cast votes in the Bay Club question when 800 would be considered ideal for a club with two courses.

A carefully selected committee of members, with expertise in construction and related fields, then developed the plan. It redid most of the member areas in the clubhouse and added a new 3,700-square-foot sports building and two new swimming pools in place of the 1950s vintage tennis clubhouse and pool. The new building provides locker rooms to serve both the tennis courts and pool complex as well as a grill that will also serve golfers at the turn. 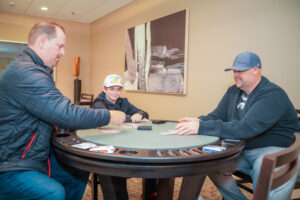 Ron Capilla, who served on the member committee that worked to redesign the building and then oversaw construction, breathed a big sigh of relief once the renovation has been signed off on by inspectors. He contrasted how smoothly construction went on the new tennis/pool building that was entirely new compared to the 50-year-old clubhouse. Every time they had to open a wall, the committee held their collective breath because they were unsure what they would find and what it could mean.

Construction started in April 2020 and both the pool area and the main clubhouse closed. Trailers were placed in the parking lot for the golf shop and staff offices. With the direction of the club established, membership grew. The finance team had expected membership to drop during construction, instead it grew. According to GM John Vest, there were 421 equity members at the end of 2020 and 817 overall. Currently in 2022, there are 508 equity members and 898 members in total with the other non-golf memberships.

The new design established a large gym on the southern second floor in place of the spacious member’s grill. In addition to weights and machines, it also has a studio for Pilates and other classes. 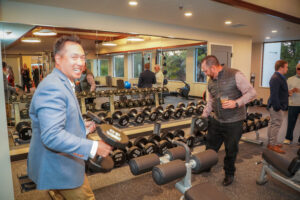 The prior design had way too much space devoted to member and guest dining. The new design trims down the member dining on the main floor inside, while adding a west-facing patio with heaters for outdoor dining (heaters hang from the rafters). It’s accessed through the bar that is the focus on that area. It will be the heart of the club for members. An elevator connects the pro shop and locker rooms on the ground level to the main dining room.

For outside groups renting the banquet facilities, they will now enter through the refurbished north patio to the banquet room. It’s the same capacity at about 400 people for dinner so it’s one of the larger facilities in the Tri-Valley area. The oak parquet floors received an updated gray stain that nicely matches the paint scheme in the room along with the modern new fixtures. People coming to a banquet will be pleased. The bar remained the same size after the facelift.

The design allows the banquet facilities with restrooms to be isolated from the other areas so members can still use the rest of the club including the bar, dining room and patio during outside events. The initial design had just one set of restrooms.

The biggest positive change for banquet—goers was entry patio that faces north and east on the north side of the building. Trees were removed and others trimmed so there now are wonderful views of the valley. It also has outdoor furniture so it will be a wonderful cocktail space when the weather is pleasant.

The club also has its golf maintenance crew working on the two courses, adding new bright white sand to the bunkers.