There are plenty of world class wineries in the Napa Valley but few with the history, as well as the sustained excellence of Beaulieu Vineyard.

Located on Highway 29, BV is a must visit on a trip to the area. If you have been there before, you know what I am talking about and if you haven’t, then plain and simple, you are missing out.

The reserve wine is as good as it gets in the region and the history of the property is one that helped define the Napa Valley.

It was back in 1900 when the genesis for Beaulieu Vineyard begun.

Georges de Latour bought a piece of property in the Napa Valley, hoping to entice his wife Fernande to relocate from San Francisco to the quiet, yet scenic area. His vision was to create world-class Cabernet Sauvignon from the exceptional terroir of the Rutherford Bench.

When Georges brought Fernande to the area, her first words were “beau lieu” meaning beautiful place. Thus, the name Beaulieu was launched.

De Latour battled through the prohibition era by selling sacramental wine to the Catholic Church. After the repeal in 1933, the seminal moment for Beaulieu came when Georges took a trip to France and met Andre Tchelistcheff, the famed viticulturist.

De Latour persuaded Tchelistcheff to come to Napa and in 1940, Beaulieu released the first vintage of Private Reserve, named after the founder. To this day, the Georges de Latour remains one of the most sought-after Cabs from the Napa Valley.

Tchelistcheff guided the winery throughout the years and made sure it stayed on   the right path, working from 1991 until he died in 1994 with Director of Winemaking Jeffrey Stambor, serving in the capacity of a mentor.

Current winemaker Trevor Durling – only the fifth winemaker in the long history of BV – carries on the traditions of wine excellence established by those before him. 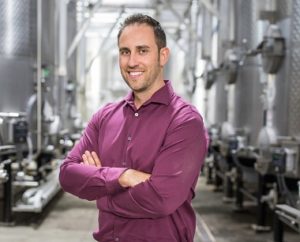 There are four levels of tasting experiences available at the winery. We took the Georges de Latour Personalized Legacy Experience.

It might be a little pricey at $125 a person, but it is worth it and that’s something I don’t often say about the sometime high-priced Napa Valley.

Robert was our Legacy guide. He has been with BV for 14 years and was a wealth of knowledge, both on our tour of the facility and in our private tasting room.

The 1976 was an honor to taste, even with it tasting a bit musty with a much different color than the others. Just the fact we had the chance to sample a legendary bottle was an incredible experience.

When asked if he could have one final bottle of wine, what would it be, Robert said the 2002 Cabernet.

Before our tasting we were given a tour of the winery, including some areas that are no longer used for production, but have been set up as a museum to show the history of the winery.

It was informational and entertaining.

The other levels of tastings range from $30 per person up to $50 per person, very fairly priced for the region.

The bottom line is, if you are going to visit the Napa Valley, take in the history of the region as well as some excellent wine. Beaulieu Vineyard captures both in a big way.

For more information go to www.bvwines.com.