It’s stunning to realize just how positive the COVID-19 pandemic has been for the golf industry.

Once course managers convinced health officials that there’s no better sport for social distancing, exercise and being outdoors, courses started operating again. And people have flocked to golf, whether on the course, in a stand-alone facility like a driving range or Top Golf or even to specialty shops offering lessons.

The National Golf Foundation estimates more people tried golf in 2020 than any year since Tiger Woods went pro in 1997. Len Dumas, Executive Director of the Northern California Section of the Professional Golfers Association, said tee sheets are full, instructors’ calendars are full and all facilities related to golf are busy.

It’s a similar story at the Course at Wente Vineyards where Mark Van Buskirk reported through June 22,000 rounds had been played with busy weekends reaching 230 rounds a day. With the closures and 15-minute intervals on tee times and one-rider-per-cart rules, Wente finished 2020 at 28,000 rounds compared to 30,000 rounds in 2019. The course, after a six-week closure, started with 15-minute intervals and single-rider carts that limited capacity. So, you can see how excited the Wente team is with play to date and its busy tournament season just starting, as well as 10-minute intervals between groups. 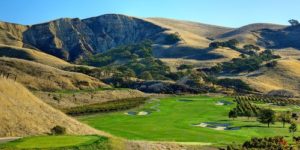 Course at Wente on track for record rounds

It extends to country clubs as well, particularly those with a broad range of activities designed for the entire family. At Blackhawk Country Club, which has two 18-hole courses, a tennis center, a fitness center as well as a ballroom and other event space, the year has been record-breaking. Nikki Ericksen, the membership director, reported by email that nearly 250 new memberships or upgrades in 2021 and they are approaching selling out non-proprietary golf memberships. That will leave only equity memberships. Tee times are double compared to pre-COVID.

The rebranded Club at Castlewood expected to lose members during its $16 million renovation project and new construction project that began in April, particularly during the planning that began in the spring of 2020. Instead, the club has seen a membership gain, reflecting the growth country clubs are seeing across the country.

And, as impressive as those numbers are, consider that demand is bringing the closed Shadow Lakes course back to life in Brentwood. It closed in 2016 and reopened its driving range in 2019. It’s planning to reopen nine holes this fall along with its clubhouse reconfigured as an event center.

Shadow Lakes was one of four courses totaling 63 holes all located on Balfour Road west of downtown Brentwood. When it opened, it was designed as an upscale daily fee course like Poppy Ridge or the Course at Wente Vineyards in Livermore.

Brookfield Homes partnered with Troon Golf on the initial project with Troon having complete control over the routing. Brookfield built the homes surrounding the golf holes. There were no trees on the rangeland, so Troon and designer Todd Eckenrode added six lakes to the hilly site. The holes featured plenty of elevation change. It opened in 2001 as developers overbuilt golf course communities in Eastern Contra Costa County.

I played in a couple of events benefitting Shepherd’s Gate and it was a typical Troon-managed course—excellent conditions. A few years later, I played for free there on my birthday and was stunned at how shabby the conditions were. They didn’t get any better because green fees had dropped to $25 so there was minimal money for maintenance.

The other courses along Balfour Road, Roddy Ranch (another upscale course designed for housing that never was permitted) and Deer Ridge (across from Shadow Lakes) have closed in the last several years, while the 27-hole Brentwood Golf Club was the only facility operating when the pandemic hit in March 2020. The facility was purchased in November 2019 by Rex Choe who set out to upgrade the conditions on the Ted Robinson-designed tracks (Robinson has designed more than 170 courses).

Reports in the Brentwood Press indicate that Choe’s management and upgrade efforts are working for the golfers.

The challenge for Choe and other managers alike are similar to those faced by employers around the country—lack of work force. Dumas said that general managers are struggling to find people in both the golf operations and in the food-and-beverage. Food and beverage is no surprise—that’s a struggle for restauranteurs everywhere. It’s so challenging that one private club posted a job for its top assistant at a competitive wage and received no applications.

“The pool is light in all aspects—not only golf aspects, but also food and beverage,” said Dumas. “It is not unique to Bay Area or Northern California. Talent and staff are very difficult to find.”

Staffing certainly is a challenge, but it’s a welcome one compared to limited or no operations.