Wine Country Racing, which has become arguably the most popular of the Northern California Fair horse racing meets, kicks off Thursday, August 1.

The meet runs in conjunction with the Sonoma County Fair, with the dates of racing August 1st to 4th and August 8th to 11th for a total of eight days of horse racing in the beautiful Sonoma region.

The meet is the lone racing meet not overseen by the California Authority of Racing Fairs (CARF) – the Fair ran its first meet without CARF in 2013 – opting instead to run its own meet and it’s thriving because of it, becoming the most lucrative Fair meet in terms of daily handle average.

It’s also a true country Fair in terms of atmosphere. It’s not unusual to walk through the agriculture area and share the walking area with cattle, sheep or goats, all the while surrounded by the kids from local 4-H and Future Farmers of America chapters.

It has got the charm and atmosphere of a real county fair. It’s the fair experience to be treasured. 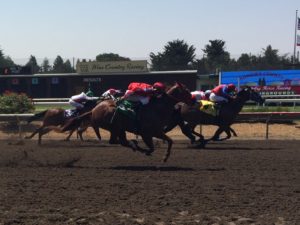 Wine Country Racing still has more to offer – Santa Rosa has a rich and successful history in Santa Rosa.

The first fair event was held in October of 1936 and was a huge success with 70,000 people attending. The handle of $20,100 was the fourth largest in the state.

“The grandstand would always be full – it was very exciting,” said Charlie Slender an 80-year-old local resident whose father Charles was an owner/trainer back in those days. “The Fair was a fair back then. It’s gotten more commercialized over the years.”

Slender’s favorite memory of those years came in 1951. His brother Tucker started as a jockey in Santa Rosa but took his tack to Hollywood Park where he was a top apprentice jockey.

Charles wanted Tucker to come back and ride one day at the Fair, but Tucker was reluctant to leave Hollywood Park for the day.

“He didn’t want to come, but he did,” said Charlie of Tucker. “He couldn’t win a race all day, but Jack Robinson (a legendary Northern Rider) took off a horse for Tucker in the last race and he finally won. That was a great day.”

Racing in Santa Rosa continued to grow as the handle first topped $2 million in 1955 when the grandstand was enlarged again, and the racetrack was updated to an 80-foot wide track. 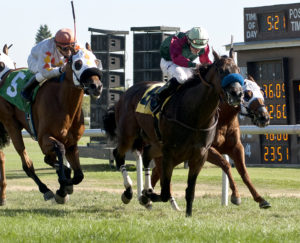 In 2005, the Sonoma County Fair established itself as the premiere Fair horse racing meet with the addition of a turf course, spearheaded by the efforts of then Fair manager Jim Moore.

Prior to the instillation of the turf course, there was no turf options for horsemen to run their horses over the grass forcing them to ship elsewhere during the summer. This was also a point often made by those that wished to see the Fair racing go away.

“That helped the Fair a lot,” said Slender. “People like to see different types of races and big gamblers like a variety of races. Sonoma County is very lucky to have  (the turf course). They have put a lot of time and money into maintaining it. I would like to see some more race days here.”

Since Santa Rosa stepped to the forefront with the course the popularity of the meet has grown and it’s easy to see in the number of entries the Sonoma County Fair meet gets for their turf races. It also increases entries in dirt races as trainers are likely to bring more horses to Santa Rosa because of the turf and dirt track options.

This also increases the quality of the races, something echoed by one of Northern California’s top jockeys – William Antongeorgi III.

“Santa Rosa is my favorite of the Fair meets,” said Antongeorgi. “Having both the dirt and the turf is great. There’s a laid-back vibe there, but it is also more serious at the same time because the better horses run there from Northern California and you get Southern California shippers as well. It’s a perfect mix.”

Jockeys regularly take vacation during the Sacramento meet to avoid heat then return to ride in Santa Rosa. Trainers have been known to take side trips out to the bevy of local wineries and dining establishments the region has to offer when in Sonoma County.

It also attracts racing fans from around the Bay Area for a lot of the same reasons.

Bruce Philipie is Rohnert Park resident that is a regular at all tracks in Northern California, but at the end of the day he knows how special Wine Country Racing has become. 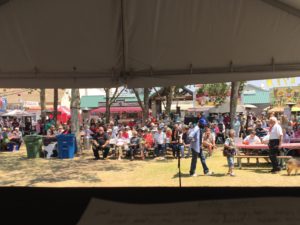 “This is a place a lot of trainers and riders come to as a work/vacation,” said Philipie, who hosts a BBQ each year for the race-track family. “There are a lot of little towns and places to go and explore all within 30 miles. This area was country years ago but even though it’s grown it still has that country charm.”

Adding to the attraction is the many racing officials, owners, trainers and other participants in the racing industry who are from Sonoma County. How they mix with the community generates interest in the races and makes racing a little more personal.

In addition, throughout the years Sonoma County Fair administrators have recognized the importance of horse racing for the finances and public support of the Fair and have promoted it accordingly.

It’s an annual event Wrona and his wife have marked off on their calendar. Having the familiar Australian voice of Wrona as the race caller gives the Fair national credibility wherever the races are shown. 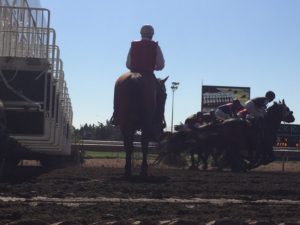 “Amidst a year of vast traveling to many new and varied locations, I’m excited to be returning to a favorite, familiar venue,” said Wrona “I’m now into double-digits, in years worked at the Sonoma County Fair, and my wife and I always look forward to renewing some treasured friendships while enjoying all that this beautiful area has to offer.”

Wrona has seen all the tracks on the Fair circuit and he knows where Santa Rosa fits.

“Fans of the Fair circuit will also be looking forward to a reprieve from the oppressive conditions in the state capital, as the action returns to the comfortable, bucolic setting of Santa Rosa – not to mention the added dimension of turf racing, which the horsemen crave and the horse players relish,” said Wrona. “I can’t wait to say ‘racing’ Thursday afternoon.”