It’s funny how suddenly your life can change.

One year ago – on St. Patrick’s Day – I was released from Kaiser hospital in Walnut Creek having suffered from Congestive Heart Failure. I spent four days in the hospital in the Intensive Care Unit and it was four days that will forever change my life.

I was 331 pounds – my wife Coni and I thought I was heavier – when I went into the hospital. It had been an ugly last few months as my energy level had dissipated to almost nothing. 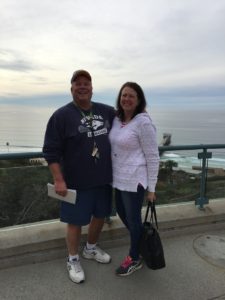 The final straw came when Coni and I were heading from Pleasanton to Roseville to visit my in-laws one Sunday. I am the type of person that will always drive when my wife and I head somewhere.

This time was different. As we crossed the Altamont Pass, I knew I should not be driving. Once into Tracy, I pulled over, so we could switch spots. At that point I had to lean the passenger seat back and lay down as we drove to Roseville.

Once to my in-laws, it took me 10 minutes to get from the car into their house and then it was all I could do to get through the visit, which included a trip going out to lunch.

It was just 24 hours later, and I was in the hospital.

Looking back, there were so many signs I kept ignoring. I thought I was having panic attacks, but the reality it was the symptoms of heart failure. I was self-medicating with vodka, sometimes at 6 a.m. just hoping I could get a couple hours of sleep. I was that exhausted.

Instead of helping, I was throwing gas on the fire.

It is a surreal experience when the doctors tell you what is wrong. I knew I wasn’t healthy, but you never think it might be time to punch your ticket. The first night was almost dreamlike. Here I was laying in the hospital, hooked up to a heart monitor with a team of doctors trying to figure out exactly what was wrong.

By day two, I was the ICU ward and the reality began to set in – I was not in a good place. Words can’t explain the feeling of seeing your wife sitting bedside with tears in her eyes. The kids coming in and seeing the looks on their faces,

In addition, two of the kids were out of state and were having a very hard time dealing with the situation. 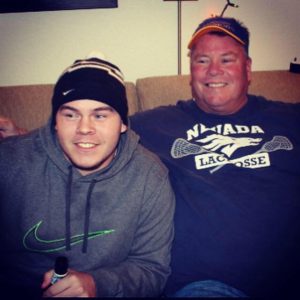 It was at that point, during my second day I realized that this was not a game – this was real life and it was time to make a change. As my conditioned improved over the next couple days, I realized how lucky I was in this case.

There were no blockages, no surgery was needed, and everything was treatable by pills. I knew my options – get your head out of your ass and be around for the wife, kids, family and grandkids or don’t do a thing and leave the most important people in your life.

It was startling to me when they started my rehab. It was all I could do to walk down the hallway in the hospital and get back to my bed. I was a college athlete and now I struggled to walk 20 yards.

But I was determined to make good and when they wheeled me out of the hospital on St. Patrick’s Day, it was a challenge I was ready to meet head on! The key to my recovery was Coni. The absolute most wonderful wife in the world took control.

Within two a day of being home, she had the kids over and cleaned out or fridge, freezer and pantry. All sodium was gone – completely cleared out. She replaced everything with low sodium food, prepared the meal tracking sheets – you name it, she dialed it in.

Most guys dream about having a wife like Coni and here I was with her right in front of me. She saved my life plain and simple.

Given my options, it was easy to fully embrace my new life.

The weight started falling off and slowly my stamina came back. About a month later I was able to get into the gym. Each day I felt progress and the weight kept coming off.

Amazing things were happening. I was sleeping great, former health issues were gone and my quality of life was vastly improving.

Six months later, I was almost shockingly given a clean bill of health. After my final test – a stress test on the treadmill, my cardiologist walked right by me, not recognizing me while I was sitting there waiting. 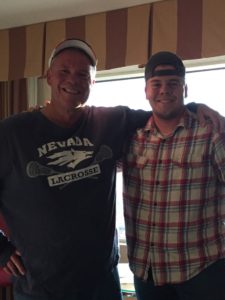 The look on her face was all I need to see. Seeing how excited she was when she realized how much I had accomplished in just six months spoke volumes. I had beaten the odds and was now in better shape than some people half my age.

That was at six months. Now at the one-year mark, I still live in the gym every morning. When I am tired at 5:30 a.m. when the alarm goes off, I look over at Coni, then picture the kids and grandkid and I pop right out of bed.

I am down 90 pounds right now and the waist size on my jeans has gone from a 54 to a 38. My energy level is through the roof and I feel much younger than 57 years old.

The outpouring of support from friends – and in some cases – new friends has been amazing and inspirational. I love you all and will be forever thankful for all you have done to support me along the way.

Along with my family, you have been the driving force.

I have gotten messages from people asking for help and my message is simple. You either want to live or you don’t.

That may sound harsh but that’s the reality of the situation. You can’t improve your life unless you are committed 100 percent to doing so. My advice has and will always be – think of your loved ones. There should be no greater motivation than doing everything in your power to be around as long as possible for those that love you.

Every morning I wake up with a smile on my face. I know I am blessed to have a family that loves me. As I write this, Coni and my granddaughter Aubrey are asleep in our bedroom. I occasionally peek on them and a big smile takes over my face.

It just can’t get any better and the feeling I get knowing I am doing everything I can, each day is an unquantifiable feeling.

Thank you for putting up with this diatribe and God bless all of you. I am here for anyone that needs some motivation or just wants to talk. We are all in this together and always will be.