Ridgely Evers, owner of DaVero Farms and Winery, bought a ranch outside of Healdsburg in 1982 as a weekend home because he wanted his kids to understand life outside of San Francisco.

The family liked the area so much that they moved there full-time even as Evers continued to work at Intuit where he was responsible for developing QuickBooks. When he bought the land, he invited the caretaker, Juan Valladares to stay. He’s still there 30 years later, living in home on the land as his son prepares to take over his duties.

By 1989, Evers had decided that he wanted to farm olive trees and imported four varieties from Italy. These were the first olive trees imported to the United States since the 1800s and his land was so remote that the trees could serve the quarantine period on the ranch.

That launched what became a premier line of olive oils with the first oils produced in 1994. Evers’ wife, Colleen McGlynn, knew celebrity chef Mario Batali from her days in the San Francisco restaurant scene. Today, two of Batali’s restaurants in New York City are the only places you can find the olive oil other than at the Healdsburg tasting room.

The history was explained to us by Andrew Hock, the director of operations, as he took us on a private tour of both the home farm and the newer DaVero vineyard and winery on Westside Road just across the Dry Creek Bridge. DaVero owns land on both sides of the creek and leaves it wild as a buffer to other operations. That’s true of both parcels, half is left wild. 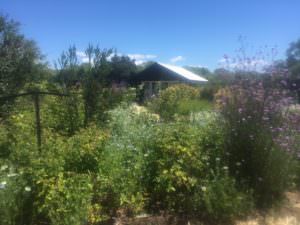 Garden and board room for tasting

As Andrew explained, that fits with the philosophy of honoring nature and working with it. All the vineyards and the orchards are farmed organically and the farm area at the winery is biodynamically farmed by Michael Presley, the soil keeper. He plants a dense group of flowers, vegetables, trees and other plants specifically designed to enhance the habitat for predator insects that control the harmful ones on the vineyards.

All plant matter is composted and seeds are saved each year for the next garden. Andrew said they have four, four-drawer filing cabinets full of seeds. They supply olive trees to other growers.

The garden is so productive that they donated more than 4,000 pounds of produce to the local foodbank, as well as providing it to staff, local wine club members and utilizing it for the food-to-table pairings at their wine club events.

With the olive oil business established, Batali encouraged Evers to consider the wine business so they planted Italian varietals, Sangiovese and Sagrantino, in 1999. As the business grew, they added more varieties so last year they made 4,200 cases with 16 different wines. The vines are dry-farmed and there is no blending in the varietals. They focus on Italian varietals because the of the Mediterranean climate that Healdsburg and Northern California shares with premier Italian wine regions.

Bill Williamson from Williamson Wines in Healdsburg shares a similar philosophy, using French winemaking techniques coupled with the Northern California climate that allows him to pick grapes at their peak. In France, weather can dictate picking grapes before they are fully mature.

The DaVero winemaker practices “Old World” techniques using native yeast fermentation and aging in neutral oak barrels that allows the varietal character to flourish in the finished wine. The wines are not filtered so any bottle will have sediment.

Andrew took us touring in a vintage cherry-red Toyota Land Cruiser. Our first stop was a granite table in a shady patio on the home ranch overlooking one of the irrigation ponds. He started us out with a Vermentino, a crisp white wine sourced from a Lodi vineyard.

He followed it with a delightful rose produced with a mixture of Sangiovese and Barbera from the estate. Unlike most roses that are a byproduct left over from producing other wines, these berries are only used in the rose that gives is much more complexity and character. We tasted the Altobasso Rosato while in the mountain vineyard of Sangiovese and Sagrantino that looks out on the Dry Creek Valley. 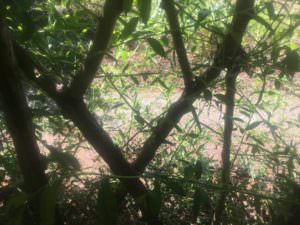 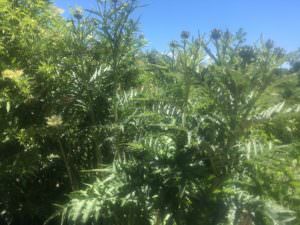 A non-edible artichoke flourishes in garden

We then returned to the winery on Westside Road and toured the garden and then settled in the Willow Circle that is exactly what it says. A circle of willow trees, all from the same cutting, that cross and merge together as they grow. The sides are well established and the final task will be weaving them together in the “roof.” 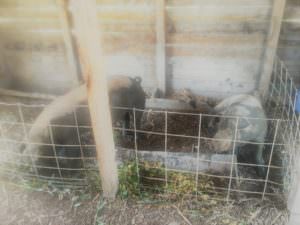 Pigs that serve as tractors in vineyards

That included a stop at Andrew’s tractor barn—otherwise known as the pig pen. The farm team turns chickens loose in the vineyards after the harvest. They are followed by the sheep and finally the pigs, serving as tractors by turning up the soil as they root for food.

We enjoyed a plate of three local cheeses, two salumis and dried fruit from the farm. We tasted 2014 Carignano sourced from a vineyard planted in 1912 in Mendocino. It was followed by the 2015 Primitivo (the Italian version of Zinfandel) that comes from a vineyard just three miles away from the winery. Andrew admitted he was not excited about making the Primitivo given all the Zinfandel produced in the Dry Creek Valley—his view changed when he tasted the wine.

The 2012 Sangiovese ($75) from the Hawk Mountain Vineyard was drinking well after four years of aging and would pair well with lamb or game.

We finished 2012 Sagrantino Riserva ($125), the premium grape, that helped convince Evers to go into the wine business. Andrew said it will age for 20 years. 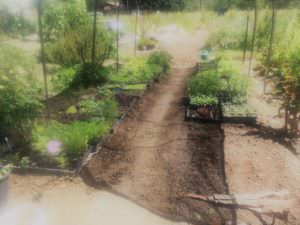 All the tastings, whether at the bar, or on a tour include two olive oils. We brought home the Meyer-lemon infused oil. Traditionally, Italian growers crush lemon rinds with the final picking of olives—a technique that DaVero uses.

It finishes with the one non-estate grown product served, a 15-year-old Balsamic vineyard imported from Modena, Italy that is made in the traditional way. Delightful and we took home a bottle as well.

The wine and olive oil is sold direct to the consumer, either through the tasting room or the wine clubs.  Thanks to Scott Hafner of Hafner Vineyards for the recommendation to visit. We had enjoyed a Sunday afternoon party at the family-owned Hafner in the Alexander Valley the day before our tour.

We recommend the farm tour ($50 per person) for an interesting conversation and experience. Andrew conducts about 70 percent of the tours and there is a maximum of six people on any tour. Reservations are required.