Bobby Clampett carries unusual credentials in PGA circles. Not only did he play 15 years on the tour and five years on the PGA Champions Tour, he is a PGA Master Professional of Teaching and Coaching.

The teaching distinction is being poured into his revolutionary Impact-Based Instruction that is changing how some PGA members teach golf.

Bobby learned the need for his system first-hand. After a successful amateur and collegiate career that included two Fred Haskins Awards as the nation’s top college golfer, he turned pro and qualified for the tour. He finished in the top 17 on the money list in his first two years and then he heeded advice from others to hire a coach. To say that didn’t work out, is an understatement.

That experience is cemented in his memory.

“I had an Ah Hah moment while working at CBS. It hit me hard. On tour, I had a couple of good years and then got talked into taking lessons from top teachers. I never cracked the top 80 again. I clearly was not being helped by trying to change my style of swing,” he said.

In fact, he made more money in 87 PGA Tour Champions events using his method than he did in 396 PGA Tour events.

His 25-year career with CBS provided him with the unique opportunity to study the swings of the top pros. After a broadcast finished, he would sit with the CBS Biz-Hub Swing Vision camera and study what the players had in common. That became the basis for his Impact-Zone teaching.

Bobby spent two years writing his book that was published in 2007 while he was working for CBS and thinking of the PGA Tour Champions when he turned 50 in three years. The feedback, he said, was great and led him to lay the foundation for his Impact-Zone teaching method.

He had been studying the golf trends, which are not positive. Although various golf organizations have done a good job of building entry points for young people and others into the game, too many people were quitting.

“Between the tour and the Champions Tour, I have played a lot of pro-ams and you get a sense of what’s happening in the industry. It’s extremely revealing: 22 years of increasing the number of courses followed by 16 years in a row of decreasing. More closures and a 25 percent decline in the number of people playing.

“So many people get started and then quit out of frustration because the average golfer doesn’t get better. The foundation not been taught as well as it could be. Average golfer is confused—even today more than any time in history with all the conflicting and contradictory opinions. 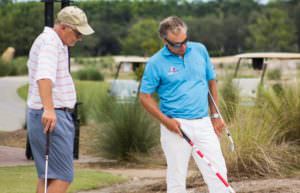 Bobby works with a student

During his CBS study time he noted that swing styles were very different—the common point was the club at impact. After writing his book, he took care of the legal requirements to protect his techniques and laid the foundation for credentialing coaches and launching his school.

He was preparing for the PGA Tour Champions while they lived in Naples, Fla. Bobby and his wife, Marianna, the president of the company, liked the area so they headquartered it at the Tiburon Golf Club at the Ritz Carlton Resort.

They also have a home in Carmel where Bobby grew up playing and practicing at the Quail Lodge and Golf Club.

“We have developed a new way to teach golf in a world where there is no standard of teaching. There’s a void in the industry. We have a proprietary way to teach game-training for the coaches themselves. Both the LPGA and the PGA give continuing education credits for online instruction,” he said.

The website, www.impactzonegolf.com, offers videos on the five keys at impact. One is that the bottom of the swing is four inches in front of the ball. For every inch off that mark, it means four strokes per round. So, your swing bottoms at the ball, you have a potential for a 16-stroke improvement based upon the Impact Zone study.

Asked why he left a successful CBS run and success on the PGA Tour Champions, he said, “There are plenty of people to replace me on the Champions Tour. There’s nobody to replace me in impact-based instruction. It’s better than anything else out there,” he said.

“I have been around game long time and am close friends with some of the greats. I have had the privilege of playing with people who really help the game—sponsors and big-time CEOs. People who have integrated golf into culture of their companies. I get to put these years of doing that (87 PGA Champions events, 396 PGA Tour events plus hundreds of pro-ams and charity events. I have been exposed to an incredible number of golfers in the game,” he said.

He hopes, as the business grows, to start to offer more in California. We met at Edgar’s restaurant in the Quail Golf Club’s clubhouse. He was just back from a clinic in Valenica in Southern California that he taught with Lee Martin, who gave him golf lessons, and the Naples director of the women’s program, Payton Minear. He can skip the I-5 schlep because he’s a private pilot with more than 6,000 hours.

He’s traveled the country and the world with the tour, but still loves to come home to Carmel.

“There’s so many guys that I have known for so, so long that are still hanging around. It’s always been that special deal for me of coming home to familiar land. Quail is still Quail,” he said.