Crosswater showcases the Sunriver Resort south of Bend, Oregon as the premier course of the four tracks offered onsite.

The course, designed by Bob Cupp, is aptly named. Depending upon what tee you are playing, you will have ample opportunities to cross the water—the Deschutes and Little Deschutes rivers crisscross the course. A marshal told us that you can cross water 22 times over the 18 holes and consider that there’s no water in play on No. 1 and water is a lateral hazard on Nos. 2, 3 and 4.  Crossing the water starts on No. 5, so be sure to bring plenty of balls if your A Game isn’t with you. 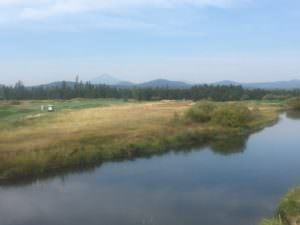 That said, it’s a wonderful golf course that was in superb condition when we played it in mid-September. The greens were rolling at about 11 on the stimpmeter and were true. Cupp designed a few greens with humps running through them—these were called out on the detailed pin position flyer provided by the starter.

We missed, what the accompanying picture shows, the magnificent views from the wide-open fairways and vistas on the heathland-style course. Central Oregon has been largely without its classic views since the smoke from the numerous wildfires filled the area in June. Normally, you can fill your eyes and your camera lens with views of snow-capped Mt. Bachelor, Broken Top and the Sisters.

Cupp’s routing takes a golfer through a few holes of woodlands, with most of it running through the wetlands to take advantage of the rivers. Cupp designed lakes into Nos. 2 and 12—the rest of the water and wetlands are as God designed.

One of the more challenging holes is No. 8 that requires a drive across the river from back tees and then another approach shot back over the river as it loops around in front of the green. The green is 25 yards deep, but three times that wide. On Nos. 8, 13 and 18 there are local rules that allow a golfer, at another stroke penalty, to play from a drop area after failing to clear the hazard with two shots. That’s not losing a sleeve on a hole if your driver checks out.

One note: there are plenty of yardages on sprinkler heads, but picking up a yardage book for the first-time ($10) is a wise move. It helps on No. 8 and several other holes.

The course is routed over 600 acres with some homes located nearby that do not come into play. For the most part, these are high-end custom dwellings. 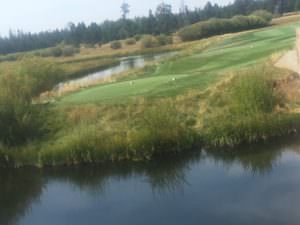 The Sunriver Resort offers three other golf courses—the Woodlands designed by Robert Trent Jones Jr. is a championship course; Meadows was designed by John Fought, while Cupp did the family-friendly nine-hole Caldera Links.

The courses other than Crosswater are accessible to the public, while the private Crosswater is available to resort guests and members. It has been widely recognized as a top 100 or better course you can play by golf publications and it lived up to that reputation.

Crosswater has been the site of PGA Tour Champions events as well as the PGA club pros championships. From the tips, it plays 7,683 yards at a slope of 146, while the black tees are 7,273 at 143. The white tees play 6,138 at a 131 slope. It’s a great test and one not to be missed when in Central Oregon.