For golfers staying in either Reno or Truckee, driving 45 minutes to play Grizzly Ranch in Portola is a no-brainer.

In the Truckee area, there are several fine public golf courses, but Grizzly Ranch is the only one ranked by Golf Digest as the No. 1 club in the Sierra Nevada. That list includes such legendary tracks as Pebble Beach, Spyglass Hill, Aviara in Southern California and Pasatiempo and CordeValle.

Currently, there are only 46 of the 385 homes built on the more than 1,000 acres so the routing takes you into what has the feel of mountain wilderness like Coyote Moon. Bob Cupp designed the course, which opened in 2003 as an ultra-private gated community. It stayed that way until the recession and decisions of the owners resulted in a sale to some members.

The course then became semi-private and a “must play” for golfers coming to Reno, Truckee or the Graeagle area north of Truckee.

Grizzly Ranch is built entirely on mountain surrounded by mountains on three sides so there are plenty of elevation changes.  The design, however, allows relatively flat lies if you hit the fairway—miss it and you can be standing on a slope with a downhill lie. 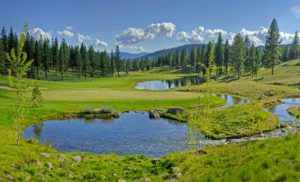 Cupp’s routing takes full advantage of the terrain with most holes featuring either an elevated tee or an uphill drive. On many holes, there are ample landing areas, but there are others—notably No. 1, No. 12 and No. 17 (along with the par 3s) where a precise tee shot in required. No. 12 is a downhill par 5 that plays 649 yards from the tips. It requires carrying two gullies that bisect the fairway.

The 640-yard par 5 No. 3 likewise requires an approach shot over a gully. The gully pinches in the fairway so it requires two huge shots to get home in two or a well-placed layup to have a wedge to the green.

The greens were in superb shape both times we played. The rounds were in the afternoon—one time after more than 100 rounds had been played earlier—and they rolled true.

One excellent addition that Grizzly provides is a detailed yardage guide. With forced carries, gullies bisecting fairways and water hazards, it allows the first-time or occasional player the opportunity to avoid trouble. 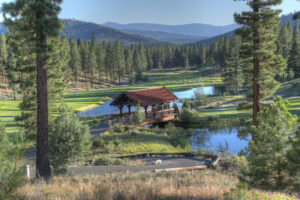 Grizzly Ranch aerates the turf and greens in mid-September to give the grasses ample time to recover and grow in before the snows arrive. It is at an elevation of 5,200 feet, about 1,000 feet lower than the courses in the Truckee area. This allows Grizzly to be in better condition once it opens for the year in the late spring. The soft opening is set for May 5 with the formal opening May 12.

The facilities are well set up for a buddies’ trip or a foursome driving in from Reno or Truckee. There are good practice facilities (range balls are included in the greens fee). The Lakehouse is located next to the practice area, the 18th green and near the 10th hole at the turn. It includes a full bar with seating indoors and on the patio; and a limited menu (sandwiches and hot dogs). 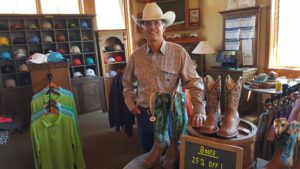 Incidentally, Van Batchelder, the general manager and director of golf, embraces the “ranch” aspect. When we played, he was decked out in full Western gear including a cowboy hat. His pro shop is one of the unusual ones where you can buy both FootJoys and cowboy boots. He said he sells about 25 pairs of boots each year.

The owners have built three luxurious cabins (cabin being a misnomer) that are just a short walk from the pro shop. They all feature ample patios with gas barbeques, full kitchens and quality furnishings. We stayed in the closest one to the golf course and could look out of the bedroom window (or off the patio) and see the pro shop. The view out of the kitchen window was the 9th fairway. Early one morning, we saw a family of deer, including a 3-point buck, walk by nibbling on green shoots of plants. 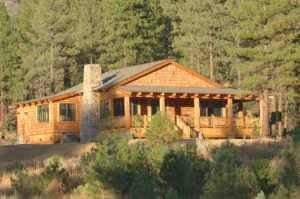 The cabins have 2 ½ baths. Two have two bedrooms: the master bedroom has a king-sized bed and a bathroom with separate shower and bathtub, while the other room has two queens and a private bath. They sleep six comfortably with excellent furnishings. Room rates are $350 per night.

The ownership is expanding the onsite amenities beyond the superb golf course and the original Outpost with swimming pool, spa, fitness room and game room with a pool table and comfy couches. A new swimming pool was constructed last fall and they added a family area with a volleyball court, tables and chairs, a green space and a bocce ball court.

The site also features five miles of walking trails and adjoins publicly owned land on two sides and the Big Grizzly Creek, a favorite trout stream, on the third side.

Whether a resident or a guest staying in the cabins, Grizzly invites bringing your own groceries and taking advantage of the kitchen and gas grill.

There are limited options in Portola, but the Chalet View Lodge eight miles west on Highway 70 is worthy of a visit. It has an excellent restaurant, lodging plus an onsite brewery. It has a robust wedding business so reservations are strongly recommended for the dining room. It’s billed as a boutique, four-star property.

The dining room is tiny with just about 20 seats, but the patio (which has gas heaters) accommodates another 20 diners and overlooks the pool. The wood-burning pizza oven is located on the patio.

To help the small kitchen team, the restaurant only serves salads and pizzas on Mondays and limits Tuesday to just the entrees. The other five nights you can order anything off the menu, which changes seasonally.

The fall entrees ranged from pepper corn Manhattan steak with a twice-baked Yukon potato, creamed green veggies with a red wine gravy; to a burger with roasted tomato and grilled potatoes; roasted chicken enchiladas; vegan chili; Yakisoba noodles with the opportunity to add chicken, shrimp or steak; and shrimp and grits.

My bride opted for the Yakisoba noodles with shrimp—a well-prepared dish with plenty of zip from a hot pepper. 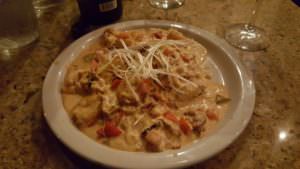 I selected the shrimp and grits—it was a good thing it was Tuesday and salads and appetizers were not available. The portion was more than ample. It should be noted that we dined after 18 holes with no post-round snacks.

Entrees ranged in price from $14 for the burger to $28 for the steak. Salads are offered in two sizes ($6 to $14) and include Caesar, Caprese and a pea shoot. Wood-fired pizzas range from the Margaretta ($13) to a Kauai Shrimp with bacon and pineapple ($18).

The onsite brewery options are complemented by a nice and reasonably priced wine list. We opted for a Meomi Pinot Noir blended with fruit from three prime areas (Santa Barbara, Monterey and Sonoma) at $32. List price is $20.

We definitely will return when we are back in the area.

When the development opened in 2003, it was an ideal time in the real estate cycle. The initial developer sold many lots, including a bunch to investors who were planning to hold them for a couple of years and then flip them at a handsome profit. That strategy may have worked for a few, but when the slowdown started to take hold in 2007 and the recession and financial crisis followed in 2008, many were left holding lots. 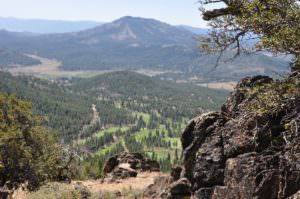 A group of investors bought the showplace golf course and kept it operating as a semi-private facility. As of last fall, there are only 46 homes built (380 homes are planned on more than 1,040 acres) and many lots are owned by investors.

Jeff Brown, who owns a real estate firm in Truckee that specializes in luxury properties, said the buyers have shifted. Before 2008, the primary target was retiring baby boomers so a quality golf course was mandatory. Now, the market has shifted to the Gen Xers, who likely have children still at home. Golf still is important, but there’s demand for family activities.

Grizzly Ranch fits that criteria with the expanded Outpost coupled with plenty of options for hiking, fishing and water activities on Lake Davis that is just a couple of miles up the road.