Fall for ACES meant heading to the East Coast for lobster and leaves.

We were delighted on both accounts, although we left the golf clubs home because of the timing (there were plenty of golf courses that we will try on another trip and we experienced unseasonably warm weather). We spent a couple of nights in the White Mountains of New Hampshire and enjoyed a wonderful drive on the Kancamagus Highway checking out granite-lined gorges and the amazing colors. 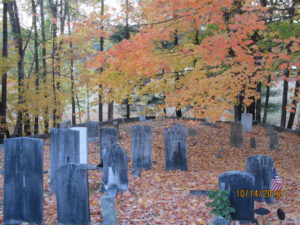 When we circled back to our inn, the vistas along the gap east of Mt. Washington (the tallest mountain on the East Coast), the yellow, orange and red leaves wove an amazing tapestry across the slopes as far as we could see.

I have seen pictures of the fall on the East Coast for many years, but, as they say, seeing is believing.

We stayed at the Inn at Crystal Lake, a small bed-and-breakfast (eight rooms) with a full dining room and delightfully funky Palmer House Pub. (the name dates to 1884 when Nathaniel Palmer built the house on a hillside. While dining there on a Thursday, a couple at the next table engaged us in a conversation. Although they had lived on the East Coast for 30 years, the wife knew Pleasanton and what’s more had a sister in Sierra City along Highway 49.

Incidentally, the pub is so small there are just 24 seats, but writers who review inns love it. 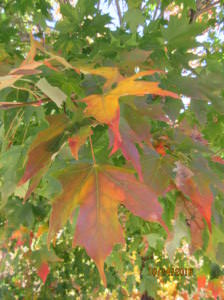 The food was tasty—portions ample—and prices reasonable although the wine list was over-priced for anything worth drinking—try a cocktail instead of the wine. The broccoli/cheddar soup was excellent as was the Shepherd’s pie ($14). My bride particularly enjoyed one of the house specialties, the Pasta al Sambuca ($19) which was Rigatoni served in a light anisette cream sauce with red peppers, Kalamata olives and artichoke hearts.

The locals also favored the poached cod with dumplings and bacon. Menu items topped at $26 for a New York strip steak.

For this trip, I majored in lobster.  Three fresh boiled whole lobsters, a lobster roll and lobster salad added to an entrée Spinach salad at the River House overlooking the Portsmouth Harbor.  The lobster salad portion was so generous that I shared it. 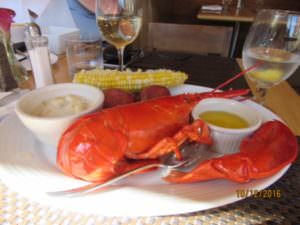 Two of the meals were enjoyed coast side, but the best value was in downtown Boston right across from Faneuil Market. The restaurant, N26 (part of the Bostonian Hotel) offers a full lobster meal for just $20 lunch or dinner.

That’s a boiled lobster with the claws and tail pre-cut, an ear of fresh corn, two boiled red potatoes and a cup of clam chowder or lobster bisque (the better choice—my bride had the chowder). It was $10 or more than that across the street in the Quincy Market and that wasn’t in a sit-down restaurant with white tablecloths, a full bar and a good wine list.

To my taste buds, you just cannot beat the sweet taste of lobster, dipped in lemon butter and matched with a California Chardonnay. 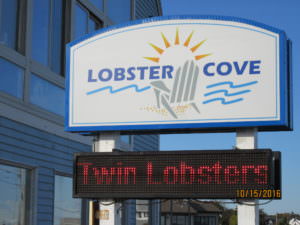 Lobster Cove in York, ME

We dined twice at the Lobster Cove along the coast in York, ME (think the Pacific Coast Highway in Southern California without the rail lines). After enjoying lobsters there twice, I understood the model for Sam’s Chowder Shack north of Half Moon Bay along the San Mateo County coast.  The wine list was short, but adequate and again there was a full bar.

While staying in Eaton in the White Mountains, we enjoyed the most inventive meal of our trip at Max’s at the Snow Village Inn. It’s upscale country dining complete with a pub, a patio overlooking the White Mountains and Mt. Washington and the dining room. 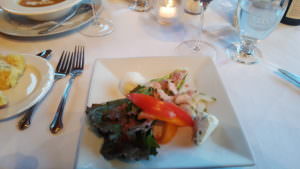 I started with the most unusual wedge I have tasted—iceberg lettuce was not available so the chef used locally grown red crisp lettuce (similar to romaine) and then had seeded yellow and red tomatoes, a good-sized chunk of blue cheese and lemon sorbet all dressed in an herb vinaigrette.

My bride enjoyed grilled duck breast that had been brined in maple cider over a duck confit with blueberries and ouzo with vegetables. I opted for the Texas antelope sirloin over a black bean tomatillo sauce with goat cheese complemented by a twice-baked potato. 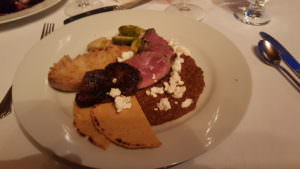 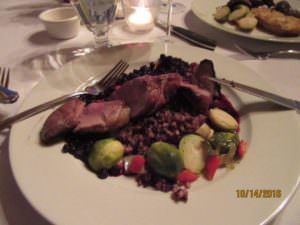 We selected a Talbott 2013 Sleepy Hollow Vineyard Pinot Noir ($60) from the Santa Lucia Highlands of Monterey County. It complemented both dishes perfectly.

Incidentally, between courses we were served an amazing blackberry and yuzu (a Japanese fruit with a lemon-like flavor) sorbet as a palate cleanser. It was so good my bride ordered it for dessert, while I opted for a delightful maple and ginger cream brulee.

If you are ever in the White Mountains, staying at the Inn at Crystal Lake and dining both in the pub there and at Max’s are heartily recommended. It’s several miles to get to the range of restaurants in North Conway, the tourism hub.

For seeing the leaves, take the Kancamagus Highway from Conway to Lincoln and then circle back around Mt. Washington. “The Kanc” as the locals dub it, will show you plenty of color and history as well, while circling around will take you through the Franconia Notch and its rugged granite. The views from the highways running around the mountain offered wider perspectives and showed off the majesty of God’s creation with multitudes of yellows, oranges and reds.

Like many things, pictures give you a hint, but you need to see it with your own eyes.

One overlook near the summit of The Kanc showed how the national forest had been managed. A master plan developed back in 1971 called for cutting down some of the conifers and replacing them with the hardwoods. Over the last 40 years, that has resulted in two or three selected harvesting of hardwoods and a resulted in a wonderfully colorful view from the overlook.