You don’t just stumble upon the Nella Terra winery when you are tasting in the Livermore Valley.

In fact, it’s hard to think about Nella Terra even being in the Livermore Valley because it’s located off Interstate 680 on the Sunol grade and carries a Sunol address.

But Nella Terra is a destination not to be missed when you head out for a day of wine tasting in the Livermore Valley wine region.

Gerry Beemiller bought the property in the 1970s when he was a bachelor, then married and raised a family. Once he retired from working in the Silicon Valley, he decided he wanted to make the land work for him.

Among the ideas was to turn the property into an event center, but since the property was zoned for agricultural, it wasn’t going to be possible. One option was to add a winery. 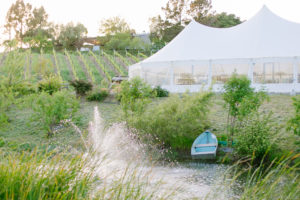 In 2013 the first vineyards were planted and in 2014, the first wedding was held on the property and Nella Terra was off and running.

What’s been created is nothing short of a masterpiece. We visited the property for the first time on a wet, windy, cloudy day and were still blown away with the sheer beauty.

The wedding/events area sits in a bowl below the winery and is stunningly landscaped. There are plants around walking paths, ponds, running water and even a waterfall.

The main entrance is a long set of stairs, with the steps made from the land on the property, highlighting the shells from an era long ago when the property was part of the ocean.

Framed by vineyards, the staircase provides a dramatic entrance for the bride.

Right now, most of the wine is sold through the weddings – they average 60 a year right now – but once word continues to get out, expect sales to go through the roof.

“We really would like the wine business to stand on its own,” said Griffin, Gerry’s son.

With the quality of the wine, that won’t be a problem. 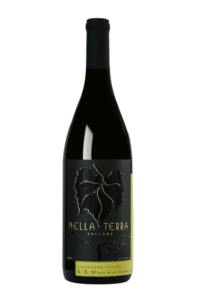 We tasted all the wines and came away big fans. They grow Viognier and Pinot Noir on the estate, as well as make Chardonnay, Petite Sirah and my favorite – the 2014 GSM. The blend of 70 percent Mouvedre, 20 percent Syrah and 10 percent Grenache stacks up favorably with the blend from other Rhone producing regions around the state.

One additional treat was the 2014 Izzy’s Blend – available to wine club members only at this point. Named for the family sheepdog Izzy, the blend of 67 percent Merlot and 33 percent Cabernet Sauvignon, is a special wine.

Oh, and the wine club. Do you get flustered with the size of some wine clubs? We have stopped going to some release parties because of the chaos that come with them.

Right now, you won’t have that problem because Nella Terra has only 70 members in its wine club. That’s a number that will continue to multiply as the months go by. Get in now and enjoy Nella Terra before the masses catch word of what’s going on in Sunol!

The location certainly is a challenge for the family because it is isolated for the rest of the Livermore Valley wineries. But the location is perfect for people from Fremont or the South Bay heading out for a day of tasting. It can be the first stop or the last stop.

While Nella Terra does seem on an island from the others in the Livermore Valley, that may not be the case for long. Griffin and Gerry talked about opening second winery, while a friend of theirs in the area may open another. That would make three in the area, a perfect number for a day of tasting. 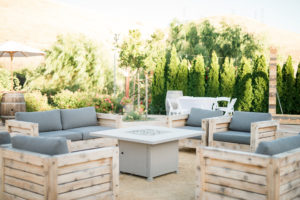 There is plenty of room and as possible locations were pointed out to us, it was clear that all would have incredible vistas.

“We would call it the Sunol Highlands,” said Griffin.

It’s not just weddings that are held at the site. There is a big Mother’s Day brunch planned this year. It’s an ideal destination for a major event such as a wedding, a corporate event, or just for a family day of having fun.

In addition to the groomed walking paths throughout the events area in the bowl, there are also picnic areas as well as bocce ball courts. Of course, weddings take precedent, but the Beemiller’s are more than happy to have groups earlier in the day of weddings. There are also lounge areas by a fireplace up near the tasting room.

Right now, the property is open the first Saturday and Sunday of every month from 11-4 p.m. Group appointments are available for groups of 10 or more.

For more information go to www.nellaterra.com.