Scusa, an upscale Italian restaurant in South Lake Tahoe, presents quite a contrast.

It boasts the white table clothes, napkins and silverware for an upscale restaurant with cozy booths and comfortable chairs at the tables. Be sure, it’s Lake Tahoe so the clientele, with a few notable exceptions, is dressed Tahoe casual. Blue jeans, custom with holes or more traditional, abound on both men and women. The setting is upscale, but the clientele is Tahoe casual.

They come for the food and wine. The restaurant’s website talks about generous portions and reasonable prices. Based on our dinner there on a busy Wednesday night, it meets both marks.

We arrived a few minutes early for a 7 p.m. reservation and were seated immediately. There are about 100 seats in the two dining rooms (still socially distanced) plus a huge patio that made no sense on the unusually cool June evening (temperature in the high 40s with a brisk wind—an evening for fleece or more). 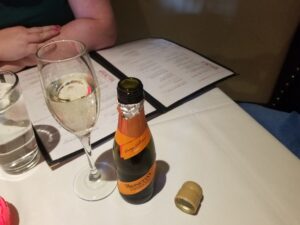 The service was prompt and the kitchen quickly delivered our appetizers. The restaurant offers wine and beer only and I was 0-3 trying to order a glass of wine because they were out-of-stock. I finally compromised on a chardonnay that did nicely with the appetizers. My ladies each enjoyed a split of Prosecco—the bottle came with a plastic twist-off top shaped as if it were a cork.

We started with Calamari Fritto accompanied by cocktail sauce and an aioli with a light touch of jalapeno pepper. In a different twist, sautéed onions complimented the breaded and fried calamari. Nice dish, although the highlight of the meal was the lobster ravioli, a special that evening. The large raviolis were stuffed with ricotta and lobster with a perfect sauce complementing them that included a drizzle of pesto on the top. We ordered the entrée with six pieces as an appetizer and it was delightful. The sauce had an Asian spin instead of the traditional creamy tomato or pesto sauce that we’ve seen served on lobster raviolis. The sauce was so good that once we finished the raviolis, we held onto the plate so we could get garlic bread to sop up the extra. 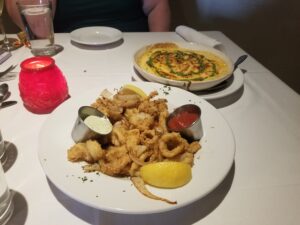 That created a challenge because the serving team already had the entrees at the table and we were still finishing up the appetizers. Yes, it was that quick. I shot pictures of the appetizers at 7:07 p.m. and the entrees just 13 minutes later. Meanwhile, I was still trying to get a glass of red wine to accompany my veal scallopini with marsala sauce. The hostess finally helped me and I enjoyed a glass of a red blend, The Scoundrel, that complemented the marsala nicely. As advertised, there were two large pieces of tender veal that I cut with my fork. 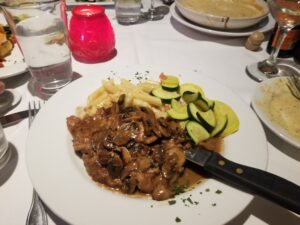 My bride chose the fresh salmon that was oven-roasted and served with a Kalamata olive and grape tomato ragu over a polenta cake. (the top picture) The salmon was perfectly prepared and my wife was delighted. The dish was executed very well and had my bride raving. The ragu was particularly delicious.

Our daughter selected a Caesar salad with chicken that also hit the spot. 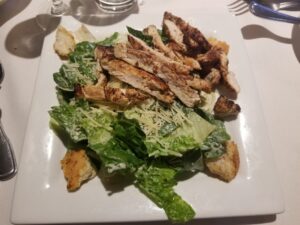 Scusa’s prices, particularly with its upscale vibe, are reasonable. The lobster ravioli special cost $19.95 and there was not a pasta dish on the menu more expensive. The main meat entrees range from $22 to $30 (the veal).

One of the more interesting entrees that I will try on a return visit was Sea Scallops Mediterranean, which are pan-seared and accompanied by artichoke hearts, mushrooms, capers and sun-dried tomato served over linguine.

The meal was capped by a complimentary birthday brownie with vanilla ice cream to celebrate our daughter’s special day. She and my wife took care of that while I passed already having eaten way too much.