When we left 7 Days in Utopia, Golf’s Sacred Journey, Luke Chisholm’s putt to win the Texas Open was tracking toward the hole.

David L. Cook’s book was made into a popular motion picture starring Robert Duvall as the wise and grizzled golf pro/cowboy who helps Chisholm discover what is important in life over seven days in the Texas hill country in Utopia. The climatic final scene/page left the reader wondering: Did he make the putt on the 18th hole?

Cook choose to answer that question by recording the first chapter of the sequel on video from the graveyard in the center of the Utopia golf course. More than one million people have viewed the video.

Now, Cook has released the sequel that builds from the Texas Open to the U.S. Open and includes a revisit to Utopia by Chisholm. He was played in the movie by Lucas Black, better known as Christopher LaSalle on NCIS New Orleans.

Please note: the sequel will make little sense if you do not either read the book published in 2006 or see the movie—the plot is similar, but the film writers significantly changed the character of Johnny, played by Duvall. So, do one or the other before diving into the sequel.

Again, it’s a fast read, with deep meaning (150 pages). It’s endorsed by PGA pros and Christians Tom Lehman, Scott Simpson and Billy Hurley III as well as NBA all-star center David Robinson. In his professional life, Cook has coached many successful professional athletes as well as Fortune 500 companies and Olympians. He lives in the hill country of Texas where the book is set so he’s writing about home turf. 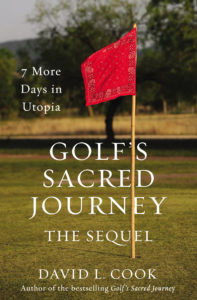 After you have watched or read the movie/book and seen the Vimeo video, you’re ready to pick up Luke’s story as he prepares for golf’s toughest test, the U.S. Open. He qualified by winning the Texas Open. He reconnects with Johnny in hopes of getting a quick tune-up on his game. He finds Johnny working with retired rodeo bucking broncos to gentle them into saddle horses and Johnny convinces Luke to stay for another seven days to prepare for the U.S. Open.

As the story unfolds, Johnny shares the back story about Chisholm’s rival, the dominant golfer T.K., played in the movie by KJ Choi. Johnny teaches Luke a different swing that he believes will hold up in the pressure-packed U.S. Open. Johnny lets Luke know that he taught the unconventional swing to T.K., but his father refused to let him use it and sent Johnny packing from his head pro job at a prestigious Texas country club. Johnny settled on his ranch in Utopia where he gentles horses and counsels pros such as Luke.

In contrast to the first book, where Luke learned balance by fishing while standing up in a small boat—splash—the story this time includes the former rodeo broncs and the new swing that Luke adopts for the U.S. Open.

The theme underlying the sequel, as it did in the first book, is that your identity and value are not determined by what you shoot on the golf course (or how much money you make; or what you do for a living). It’s realizing that a God who loves you more than you can imagine created you and has a unique purpose for you in this life.

Pick up a copy when it’s released May 8. It’s a good read.