There is no doubt the location of The Club at Ruby Hill makes for a wonderful country club.

Located in the hills of Livermore Valley wine country in Pleasanton, the idyllic setting provides wonderful vistas from the clubhouse and golf course. But until recently, there was something missing. Really missing.

Ruby Hill was not necessarily a member-friendly facility. Even though from the surface it looked perfect, that was far from the truth. There was room for improvement, with better uses available from the existing buildings.

In the East Bay, there are ample country clubs trying to lure the well-to-do clientele to their world. Something had to change to get Ruby Hill up to that elite level that the location called for.

Arcis Golf is a premier operator of golf and country clubs in the United States and in April of 2015, the Dalllas-based organization assumed ownership of the club. One of the first things was a name change, from the Ruby Hill Golf Club to The Club at Ruby Hill.

The other big change came in the philosophy of the club, which in turn prompted major renovations.

“The purpose of the expansion project was to provide new spaces for our growing, prestigious membership, to gather and entertain,” said Mike Rood, the general manager of The Club. “In the club business today you have to have family friendly facilities.”

In one year, the changes are astonishing. When one enters through the front-door of the club, a pair of grand staircases lead down to a large, majestic dining room. The room served as the members dining area as well as special event space such as weddings.

A conflict meant a loss of facilities for members as they were forced into a space that was in essence a glorified snack bar.

After the first renovation, the glorious big room is still there, but members have other options. 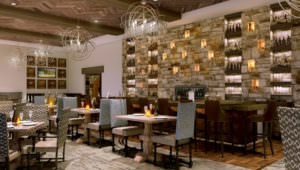 The Reserve is a casual members dining area that can seat up to 60 people and features inside and outside seating. The bar is stunning with a leather-type finish on the granite surface and now sees spots at the bar taken every night. There are big televisions in the Reserve and the feeling is much upscale. The popularity shows the level of success.

But it hardly stops there.

In the space that was formerly the laundry room, the Arcis team created “The Cellar” a dining room that seats 48 and is themed like an underground wine cellar. There is the sensation is increased with the decor and wine cases that surround the dining area.

In keeping with technological times, each booth in The Cellar features USB chargers and the club has boosted the wireless signal. In the back of the room is “The Estate,” a private dining room that seats up to 12. The Estate is hidden behind hand-carved barn doors. 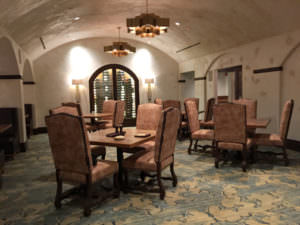 Opening at 4 p.m., The Cellar and The Estate have been a huge success, combining with The Reserve to provide members with everything they need for a night out without having to leave the property.

“We want to have the best food and best restaurant in the East Bay,” said Rood. “In the past members would come in and get a drink, then go out for the evening. Now they stay here. We have never had that before.”

Along with the new dining facilities, the area surrounding the clubhouse also was given a facelift. A new members entrance was created to the dining rooms, away from where the general public would enter for an event

With the stonework on the outside and the wine-theme on the inside, The Club at Ruby Hill now has a feeling of being at Mayacama, the ultra-exclusive club just north of Santa Rosa. Sitting right in the middle of the Sonoma wine region, Mayacama’s décor adds to the experience of being in the region.

The fact Arcis CEO and President Blake Walker spent some time at Mayacama in the span of his first visit to Ruby Hill certainly seemed to encourage the design and it is easy to say, mission accomplished.

From the Reserve, you can enter the beautiful patio area. A colonnade sweeps around the patio, with the columns adding a buffer between the members’ areas and private outdoor event space.

“The spaces flow easily from one to the other,” said Rood. “We wanted to be able to better utilize the patio. The new outdoor area gives members a variety of options.”

Not only is there a fire-pit, as well as tables to wine and dine, there are also two world-class bocce ball courts. The attention to detail on the courts is extensive.

“We are more sensitive to the roll of the ball on the bocce courts than we are with the golf ball on the greens,” said Rood with a laugh. “I think the prep time for the two courts takes more time than the golf course on a daily basis.”

By next summer look for an expanded patio area with more bocce courts to appease the growing number of participants.

Then there is the golf course, still the crown jewel of the property in my eyes.

The Jack Nicklaus Signature Course is one of my favorite to play in the East Bay. A classic Nicklaus design, the landing areas are ample, with the approach shots demanding accuracy and touch.

The front nine is a good way to get loose and find your game because the closing half plays much tougher and if the wind kicks up, downright demanding in some cases. 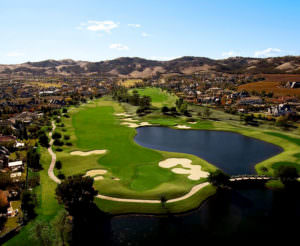 There is natural beauty as the course winds through the housing development, but you never feel enclosed at any portion.

The 15th is a bear of a hole and carries the No. 3 handicap rating on the course. Only 396 yards, the tee shot is a forced carry to an elevated fairway, followed by a forced carry again to the green. A wonderful golf hole.

The 18th is a beauty of a closing hole. A par-5 at 539 yards, the elevated tee is well above the fairway and the green. Great vistas of the surrounding area are afforded from the tee.

The hole is a sweeping dogleg left where the second shot has the golfer contemplating what to hit, because a big lake guards the left side of the fairway and cuts into some of the front of the green.

I have always felt an 18th hole should be a match-decider and this fits the bill.

I have always liked the Ruby Hill property, especially the golf course, but there did seem to be a sense of disconnect. That is certainly not the case anymore as Arcis has come in knocked one out of the park.

For more information, go to http://www.rubyhill.com