Wente Vineyards has operated its signature fine dining restaurant for 33 years with minimal changes to format until 2018.

It was a classic expense account or special occasion venue for lunch or dinner with an exceptional wine list and a menu that changed by season featuring produce grown on site and estate beef.

Notably, it was the Fifth Generation of Wente Family members which sparked the Fourth Generation to take a fresh look at the restaurant. Wente CEO Carolyn Wente was the driving force behind opening the restaurant that complemented the conference center, tasting room, sensational golf course, cellar and caves.

Asking the Fourth Generation why they didn’t come to the restaurant and bring their friends, Carolyn said that they thought it was a bit stuffy, pricey and formal. White tablecloths and service to match have been Wente hallmarks. The Fourth Generation would go along with their parents for special occasions, but that was it.

About a year ago, Wente shifted its lunch format, closing for lunch during the week and opening for a special vineyard table tasting menu paired with wine Friday through Sunday. Carolyn said they learned during that year of serving three-course meals. She explained the thought process during a soft opening of the new format for the Vineyard Table and Tasting Lounge that will formally open June 29.

They had invited employees across the winery (vineyard, barrel room, sales and marketing) to bring their families to try the new menu and give the restaurant team the opportunity to train. The following week members of various wine clubs were invited and the media was invited on June 22. In addition, members of the public dropped by.

To complement the more casual and less expensive menu, the bar area was completely redone with a marble-topped surface framed by a back-lit wall with grapevines. One-third of the dining room was split into the tasting lounge with couches and easy chairs that will be separated from the dining room by a 10-foot tall metal wine rack. The upper patio will serve the same menu as the dining room while the lower patio, with the three large fire pits will be the outdoor tasting lounge.

We enjoyed the mozzarella and olives and the thick focaccia with four slices served on a board. In traditional Wente fashion, portions were ample or larger—describing the French fries as super-sized is inaccurate because it’s too small. We took home two slices of focaccia plus one-third of the olives. We started by sipping on flutes of Wente Brut.

That wasn’t the case with the shared plates. At our server’s suggestion, we tried the Comte cheese tempura. The lightly breaded cheese was served with an aioli dip (something that was added during the soft opening) and was delightfully light without being overly rich. 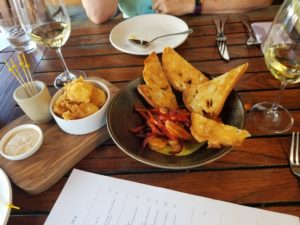 Our second choice was the shrimp la plancha, sautéed shrimp with cherry tomatoes, sweet red peppers and onions with toasted sourdough bread served over a green goddess dressing. What a great combination—after finishing the shrimp, we kept going with the bread, onions and peppers. ($12 to $22)

This was paired with the crisp Eric’s Chardonnay, Wente’s unoaked chard.

The other options were an Ahi tuna poke; artisanal cheese and charcuterie board, roasted cauliflower, and Diane’s garden bowl with greens, beets, peaches and almonds. 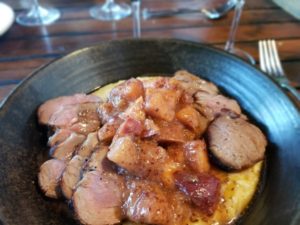 Turning to entrees, there are five offered: roasted steelhead trout with corn succotash (two large filets); crispy chicken breast with herb salad and tomatoes; and vegetable tagine. ($26 to $38) We opted for the grilled hanger steak ($38) with shallot/vinegar/mustard relish, summer squash and marble potatoes. The hangar steak was perfectly medium rare, and the sauce complemented it perfectly. It was paired with an Nth Degree Livermore Valley Cabernet Sauvignon that was savored with the food or without.

However, our favorite was the smoked pork tenderloin (smoked with three different woods) glazed with bourbon with fresh peach mostada served over a bowl of creamy polenta ($30). Paired with the Nth Degree Pinot Noir from Riva Ranch in Monterey County, this was sensational.

There are three dessert offerings, my bride selected a rich dark chocolate pudding topped with salted caramel and raspberries paired with the Petite Sirah Port. I selected the strawberry shortcake with cream that was paired with Nectar, a dessert wine with a blend of 58 percent Riesling and 42 percent gewürztraminer from the Arroyo Seco vineyards. A perfect pairing. 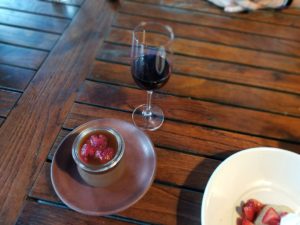 The third choice was a fun Ice Pop—a peach popsicle served in a stemless wine goblet with Brut poured over it, so it comes a peach slushy.

The lounge and table feature three tasting flights (chardonnay, small lot and Nth Degree) plus a full range of Wente’s offerings by the glass and the bottle. There’s also a new list of both garden cocktails and signature Wente cocktails plus a few beers. The traditional extensive wine list also is available if you ask for it.

One of the changes Wente is making across its properties is switching to the stemless glasses. Traditional stems will be available at the vineyard table, but that’s it. 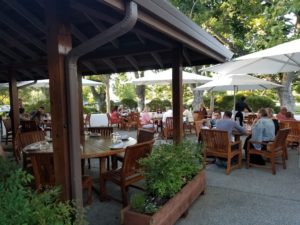 The new restaurant format preserves private, fine dining options in the downstairs cellar or the room overlooking the lawn.  The front room next to the bar now features bar tables and will be used for tasting experiences.

During the two-month closure for the transition, Wente took “very good care” of its employees a few of them told us. What’s notable is how long (around 20 years or more) many of them have worked at the restaurant in a business that is notable for its turnover. Sommelier Jorge Tinoco started in 1996 and is still recommending wine, while General Manager Catlin Bolin and Master Gardner Diane Dovholuk are still leading their areas.

One surprise was head chef Mike Ward, who took the lead role in the new menu, received a job offer to head Google’s San Francisco dining operations (a rare 9-5 job for a chef) so he left during the soft opening to take that position. Former sous chef Joshua Leidreiter, who developed the artisanal cheese and charcuterie board, now is heading the kitchen team.

The menu is still evolving—our server said there were a few adjustments during the soft opening period. Carolyn Wente said once they have operations running smoothly, they plan to go back to the fixed menu wine pairing, but that would be by reservation only.

The vineyard table is open from 11 a.m. to 8 p.m. Wednesday through Sunday. The kitchen opens at noon and the menu is the same and offered throughout the day and evening.