Simply put, it is Brandon Laidlaw and his team with Medea Vodka’s world and we are just living in it.

What started as a small company fighting for retail space in stores has now become arguably the most exciting spirits product, certainly in the United States and soon all over the globe.

And it happened it relative short order.

Medea Vodka, based in Pleasanton, initially launched in 2010, but Laidlaw and the rest of the Medea team which includes former PeopleSoft President Peggy Taylor, acquired the company in March of 2014 and finally hit the ground running in July of 2015.

They knew in the ultra-competitive world of vodka – take a look at the sheer number and types of vodka available on a store shelf – they needed a competitive edge.

What an edge they created. Medea’s patented LED technology allows the user to program the display on the bottle with a personalized message or use one of the custom messages that come with the bottle.

There are the six pre-programmed messages available such as traditional celebratory messages like Happy Birthday, Happy Anniversary or Happy New Year’s or you can download the free Medea app and through Bluetooth technology, you can program your own message or name.

“The bottle speaks for itself,” said Laidlaw, using one of the slogans for Medea. “People love to see their names on the bottle.” 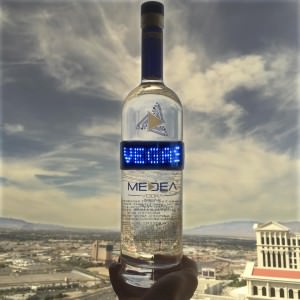 But here is the kicker. Many times when a company uses a “gimmick” to draw attention to their product, it is often a mask for something inferior. That is not the case with Medea. Far from it in fact as they have won tasting competitions and consistently received high ratings.

It is a rare example where the product actually stands out more than the display.

The vodka is distilled with pure artesian water in Schiedam, Holland one of the most respected distilleries in the world. My experience with vodka has always been with a mixer – that is until I tried Medea. Now it is served simply over ice for a smooth ultra-premium product.

“We put a lot of emphasis on the juice,” said Laidlaw. “We have six goal medals from tasting competitions. We got a 93 out of 100 from an international tasting panel that was very prestigious.”

Still vodka is such a competitive market that it was a battle initially to get the product placed in retail outlets. But once Medea got into Costco and started setting sales marks, everything started coming together. By November of 2015, Medea was flying off the shelves.

“Big box stores can validate your product,” said Laidlaw. “We set all kinds of sales records at Costco.”

Medea’s growth is so great right now, listing a number here could very well be out of date a week later. Within the first 15 months Medea had made a mark throughout 46 states and numerous continents.

“We never thought we would grow so fast,” said Laidlaw. “We wanted to double up on previous sales, but we doubled up on that.”

Of course Medea is very popular in a nightclub environment where customers have found the capabilities to send messages from table to table on the bottles.

They are gaining a big celebrity following, thanks to numerous social events. During Super Bowl week in San Francisco, Medea was the official vodka of the very popular and trendy Leather and Laces weekend of partying. 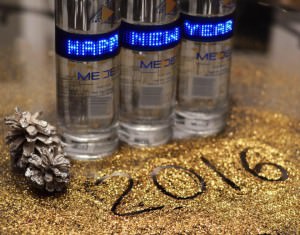 But the Medea team is busting their hides as the popularity continues to skyrocket. The demand has gone from Costco to just about every possible outlet. From Alaska to Texas and places in between and in six different continents, people want Medea.

And the team is working to make it happen.

For more information go to http://www.medeavodka.com