It’s been a week of mixed feelings for Matthew Crane.

Crane, the former Director of Golf at Lake Merced Country Club in Daly City, spent two days in Napa last week at the Safeway Open in his new position as Bay Area minister for the College Golf Fellowship. It was going back home for Matthew, who grew up in Napa as did his wife, Valerie.

Among the highlights was a dinner with pros Zach Johnson and Webb Simpson.

That high turned to a low on Monday when the wildfires started raging through the Napa and Sonoma valleys. We could smell the smoke when we left the Vic’s All Star Kitchen in downtown Pleasanton Wednesday.

Staying with a relative in Fairfax in Marin County Monday morning, he was awakened at 2 a.m. thinking the house was on fire because of the smoke. Grabbing his phone, he checked Twitter to learn about the raging fires. He was in Marin to attend Cal’s Alistair MacKenzie Invitational, which the Bears won.

It’s been a year filled with transition for Matthew and Valerie. One was in their home where a challenging time with a foster boy ended in June when everyone concluded he needed more help than they could provide. They had planned to adopt a foster child since they were married 12 ½ years ago well before they learned they could not have children themselves.

Earlier in the year, Matthew had met Steve Burdick, an All-American golfer at Stanford University, who played two years on the tour before founding the fellowship. Burdick played at Stanford with tour pros, Tiger Woods, Notah Begay and Casey Martin (now the Oregon coach).

Matthew, who had been working with college-age students through his local church, was asked by Steve if he would consider going full-time with the fellowship. Matthew had responded with a flat “no.”

That’s before God started working on him and bringing him back to his first love–ministry. Crane attended San Jose Bible College (now William Jessup University) with a double major in youth ministry and theology. After graduating, he and Valerie got married and they moved to Southern California so he could attend the Master’s University to earn a divinity degree.

After a couple of years, working full-time at night and going to school full-time resulted in physical challenges and he knew he had to change jobs. When they first moved there, he asked Valerie to get a job at a country club so he could play golf for free. She started as a cart girl—by the time she left, she was the director of food and beverage.

That opening resulted in Matthew getting hired as an assistant pro at the Valencia Country Club. He had played golf for years, but never competitively. He played football, basketball and baseball in high school and played basketball collegiately for a couple of years. Once he got involved in golf, he earned his PGA class A certification in just 20 months.

After 6 ½ years in Southern California, he returned to the Bay Area as the first assistant at Lake Merced.  When the director left, the club promoted him to the director’s position at the age of 31. 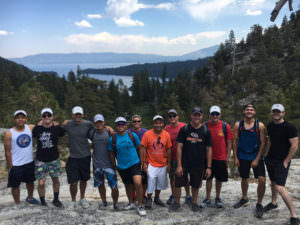 He joined the fellowship just this September, becoming the first Bay Area staff member. He will work with collegiate golfers from the Monterey area to Santa Rosa. Because of his positions at Lake Merced, he already knows some coaches and players. Cal, Stanford, USF and Santa Clara all routinely played at Lake Merced.

In his new position, he will shift from receiving a salary to raising financial support from people who believe in his targeted ministry. Discussing it, he said that he views partners as fellow believers and wants to encourage them and help them grow as disciples of Jesus, not just tap them for money.

Golf, particularly at the high level, is all about performance and it’s easy for players to tie their identity to how well they are playing. Matthew and other fellowship team members help golfers understand that there’s a greater purpose for their lives that’s tied into their unique identity.

He’s had the opportunity to participate in some group events with the fellowship team and said it’s the best group of guys he’s been around since his seminary days.