The Diamond Resorts Invitational is now part of the PGA Tour Champions “Challenge Season” schedule and is set for January 12-14 at the Tranquilo Golf Club in Orlando. The tournament will be televised live all three days on the Golf Channel.

On Wednesday, December 20, there was a conference call with several participants, but the conversation focused on college football with the playoffs approaching.

On Jan. 1, Georgia will play Oklahoma in the Rose Bowl in one semifinal, while in the Sugar Bowl on the same day, Alabama will take on Clemson. The winners play January 8 for the National Championship.

Following were the participants, as well as some of the question/answers: Lee Brice played football at Clemson. He was a long snapper there and the Diamond Resorts Invitational country music artist who is the headline entertainer at the Night to Remember dinner and concert this year; Colt Ford, Georgia grad, also a country music star who played golf inter-collegiately at Georgia; Grant Waite, the PGA Tour Champions golfer who attended Oklahoma; Marcus Allen and Mark Rypien, Super Bowl MVPs. Mark Rypien’s daughter worked for Nick Saban in the Alabama football offices for four years while she attended Alabama back when Nick launched his coaching career there.

Mark, what did you think about Alabama being selected over Ohio State as the fourth team in the College Football Playoff a couple of weeks ago.

MARK RYPIEN:  I think that’s probably the question everyone wants to know is why Alabama and why don’t we go to a 16‑team playoff.  And I think that’s ‑‑ some of the teams that these teams play towards the end of the season would bode the NCAA good for taking that game and using that game as probably an extra game to play in the playoffs.  And does Alabama deserve to be in?  Probably as much as any of the other 20 teams who have a chance. 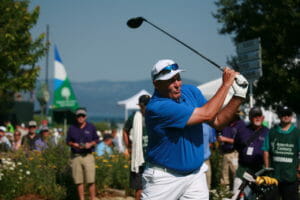 LEE BRICE: I love being the underdog. It’s worked for us the last couple of years.

MARK RYPIEN: Last year was one of the greatest NCAA championship games in the NCAA history.

LEE BRICE: The year before it wasn’t bad either. We left holding our heads held high.

Marcus, USC and Ohio State are two of the most storied teams ever.  Between them I think you have 14 Heisman trophy winners including yourself, 46 Rose Bowl appearances. It goes on. But which team is more storied between Ohio State and USC?

MARCUS ALLEN: Do you expect me to say Ohio State?  (Laughter) I’ll try to be as objective as I possibly can, but I think USC has the more storied program. It’s hard to argue.  You can go back whether it’s John McKay or Woody Hayes, both programs have been incredible programs. It’s pretty remarkable, I think. I’m not going to try to sway you one way or the other. I just think both of them are remarkable programs and I’m sure they’re looking forward to the contest on the 29th at the Cotton Bowl. But I certainly do lean towards USC.

Lee, how come there aren’t more country songs about golf?

LEE BRICE: I do have a reference of golf in my first number one song I ever had.

In “Woman Like You” you do, but have you ever tried to write a full‑on golf song maybe?

Lee, I’m curious about as a Clemson fan, are you relishing the chance to play Alabama again, maybe settle the score on who is going to win that series since it’s 1‑1 right now?  And I don’t know if you’re at all, I don’t know if offended is the right word, but slighted maybe that the lines are moving to Alabama since Clemson is No. 1 in the country?

LEE BRICE:  You know, kind of ‑‑ I’ve gotten a little bit used to it over the last ‑‑ this is now the third year.  And before these last three years we probably had, I think we had an average of two‑loss seasons like for about six years before that. I actually kind of relish in the fact that I love being the underdog. First year we played Alabama it was very close. I was there. Took my daddy and my brother. And then I think Alabama kind of stood up against somebody, said we haven’t really felt this kind of thing before, you could see it on their faces.  So last year it was the same thing.  But I do.  I look forward to it, and for the first time I’m not ‑‑ I was always afraid kind of.  We’re going to play Alabama, this is going to suck.  I’ve been a little concerned this year with our young quarterback from being able to throw down field, but he’s now learned, I think, over the last three or four games he can really control his short passing game, at least, really well and then he feels like he’s calming down a little bit like Deshaun (Watson).

And he’s got ‑‑ he’s given me some confidence to where I feel like Dabo (Sweeney) has raised men, great men and not just great players. That’s kind of what he does, and I feel like we will always have a shot. So, I’m kind of more going in this game more excited than I am nervous.

Are you still in touch with all the coaching staff?  And did you go to all the Alabama games these last couple of years?

LEE BRICE:  I’ve been to the last two national championships and I’ve been to a game a year, but it’s really difficult on a Saturday with our jobs, Colt and I, we work on a lot of the weekends, so it’s pretty difficult. But I was at the both national championship games, have the best picture with my daddy and my brother after all these years.  It’s been a really, really great time. 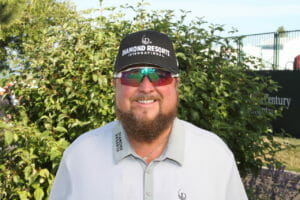 Colt, what do you think?  Will Georgia get the fan support it needs all the way out in California?

COLT FORD: Yeah, I think the enthusiasm, and everything is back with what Kirby’s brought there. Mark Richt is a great guy, was a great friend of mine.  But there was some sort of disconnect there even, not just with the fans but with the players. And Kirby (Smart) has really – he’s just regenerated that.

Obviously, what he’s learned under Nick Saban, the discipline and everything, and I think he’s really brought that kind of enthusiasm and tenacity into the program.  You can see it. You can feel it. Georgia fans travel, there’s no doubt about that.  They’ll definitely travel.

I’m taking a lot of heat right now from my buddy Toby Keith. He’s Mr. OU.  But I’m excited. It’s four really good football teams. It would be cool just to be in the final game. It would be really cool to play Clemson.

Lee and I have been friends for a long time. My mother is actually a Clemson fan. So, any way it plays out that’s four great football teams for sure.  But I think Georgia fans will travel, no doubt.

Grant, what do you think:  Would you rather win the Diamond Resorts Invitational or see Oklahoma win the national championship?

GRANT WAITE:  That’s a no‑brainer. I’m going to take the Diamond Resorts Invitational, right? But ‑‑ but there’s some great teams in these final four games and the history of Oklahoma matches history anywhere else. You talked about USC a little bit earlier. We have six Heisman trophy winners, seven national championships. I went to school there. Barry Switzer was our coach. We had Jamelle Holieway running the wishbone at quarterback. We won the national championship.  We had Brian Bosworth and Marcus Dupree and so on. And before that Billy Sims.

These guys are really icons in college football, so they are very proud in Oklahoma. They love the game. They love the college football.  We’ve got the Heisman trophy winner this year and Georgia is a great defensive team.  Hopefully for them the defensive backs are fast. They’re going to need to be.  We’ve got a couple of wide receivers, we can run the ball.  Offensively we’ll score some points. It’s going to be exciting. It’s just whether we can hold Georgia.

So, I’m really excited, because I’ve watched every Oklahoma game this year and every game, just our offense is very, very difficult to defend because there’s so many different ways that they attack. Lincoln Riley is the youngest head coach and his offense is just very intricate. We have lots of different ways we attack it.