When it comes to a festive holiday lunch, it is hard to beat the Rotunda at Nieman Marcus in downtown San Francisco.

The restaurant overlooks the giant Christmas tree and ice rink on the southeast corner of Union Square. It’s highlighted by its unique stained-glass Rotunda and caps the four-story tall Christmas tree in the open center of the dining room.

What’s unusual about the restaurant is it’s only open from 11 a.m. to 5 p.m. for lunch, an afternoon cocktail in the bar or tea.

The menu changes seasonally, although it always includes the Nieman Marcus chicken salad. 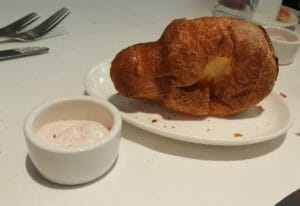 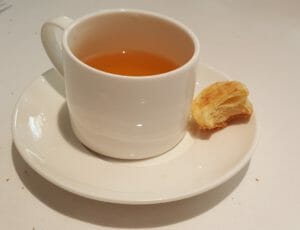 of chicken consume as an aperitif.

The wine list features 16 sparkling wines and champagnes ranging from France to Italy to California. It’s easy to find something you would like with selections from Gloria Ferrer, Moet Et Chandon, Veuve Clicquot, Dom Perignon, Iron Horse and Louis Roederer, to name a few. The white and red listings by the glass are nearly as broad. The full bar also offers plenty of top shelf choices as well as many craft cocktails. 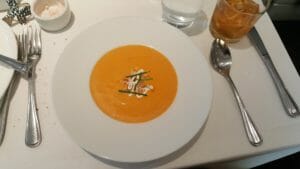 As you would expect for a lunch restaurant, the menu is heavy on salads and sandwiches with limited   entrees. When my daughter and I dined just before Christmas, as is our holiday tradition, seven entrees were offered (two chicken options, salmon, steak, or vegetarian dishes with a Portobello mushroom and quinoa pasta).

One senior couple seated next to us shared entrees, the braised short ribs over pappardelle with red wine sauce and a seafood salad. 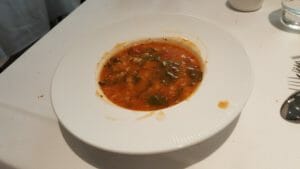 The appetizer menu ranges from white sturgeon caviar to ahi tuna poke, and includes a grilled mushroom flatbread, a jumbo shrimp cocktail and lobster “fries” as well as crisp-fried lobster. We opted for the lobster bisque, garnished with chives and pieces of lobster, and the seasonal soup, a Tuscan bean in a tomato base.

On a return visit in 2018, I tried the crispy-fried lobster egg rolls with a chili dipping sauce. Delightful. Perfectly cooked and loaded with lobster. 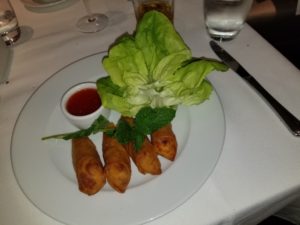 The “composed salads” range from crab and shrimp Louie to warm seafood with bay scallops, mussels, shrimp and squid to brussels sprouts and red quinoa to baby kale and cherry tomatoes to roasted beets and burrata. If you like salads, there are plenty of good choices.

Although I have enjoyed the warm seafood salad on past visits, we opted for sandwiches this year. It was a lobster club for my daughter. The lobster was complimented by avocado, bacon, and a lemon aioli on 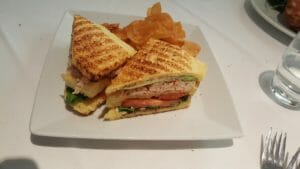 I opted for a rich Dungeness crab melt gruyere on toasted rosemary bread. Both portions were more than ample. The 2018 crab melt missed something–French bread was substituted and the sandwich, while loaded with crab, was bland.

The sandwich choices also included: a prime rib French dip, a hamburger, grilled chicken with apple and grilled ahi tuna. I passed on an intriguing burger of 75 percent ground beef and 25 percent mushrooms. That read like a tasty combo. 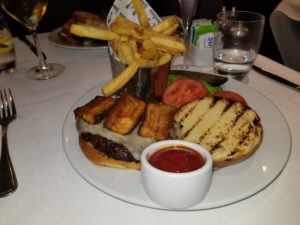 My daughter selected a hamburger and added the pork belly. Great choice along with French fries.

The lunch choices range in price from $20 to the mid-$30s—it is a special occasion restaurant. 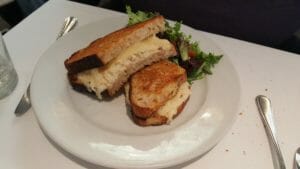 There’s a limited dessert menu, but the special of the day was perfect: gingerbread topped with a scoop of vanilla ice cream. We were not so fortunate in 2018, no holiday dessert special.

Dec. 23 seems to be our traditional day to venture to the Rotunda for an early Christmas celebration. This year, construction that had closed Stockton Street for the prior few years had been wrapped up and it was open to traffic. Frankly, having read about how San Francisco is struggling with people experiencing homelessness, I wondered how they would affect the prime shopping area given that we walked on the edge of the Tenderloin from the Powell St. BART station. No issues—streets were clean and tourists were bustling. 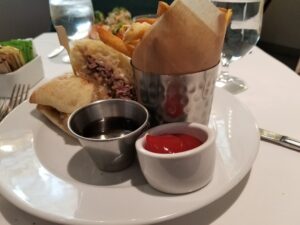 When we settled in, after cocktails, we both ordered the soup of the day, a tomato and lentil combination that hit the spot.

My daughter, a beef eater (she pointed out that you can always make chicken at home), opted for the prime rib sandwich with caramelized onions ciabatta roll accompanied by French fries. She loved it and I certainly enjoyed my bite. She asked for a glass of Malbec, but they’d run out so she had to “settle” for Hall and Patz Pinot Noir from the Sonoma Coast. When I told her that winery had hosted the fundraiser for South Bend Mayor Pete Buttigieg that he was criticized for by fellow Democratic candidate Elizabeth Warren. She took to Instagram to share that before enjoying her wine. 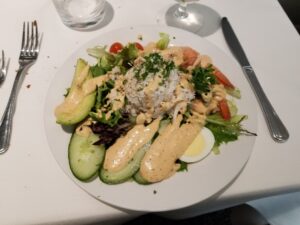 Knowing we were going to have steak for dinner, I selected the crab and shrimp Louie. It came nicely composed on the plate with a spicy kick to the dressing. Three jumbo shrimp were perfectly cooked and then chilled for the salad. And it was highlighted by a pile of cleaned crab in the center of the frisee. The portion was ample and hit the spot. Our server recommended the Far Niente Chardonnay so I accepted that as a holiday treat.

When it came to desert, none of the four offerings were particularly interesting to us (nothing particularly seasonal) so we passed.

The service, in the white tablecloth establishment, was as attentive as you would expect. If you ever plan to dine at the Rotunda during the holidays, make reservations months in advance (typically late September or October for me once travel plans are set)