When Kristy Charles and her husband Joseph Webb say Foursight Wines is a family affair, believe them.

While there wineries around the country that claim to be a family adventure, the reality is often times there are outsiders involved in the day-to-day operation.

Not the case at Foursight, a winery located right off Highway 128 as you enter Boonville.

Bill and Nancy Charles – Kristy’s parents – are long-time wine growers and property owners and together with Joe and Kristy, founded Foursight in 2006. The four worked day-to-day from the start and that continues today. Even Joe and Kristy’s lab Ozzie is around to greet customers every day.

“My father-in-law and mother-in-law take care of the vineyards,” explained Joe. “Sometimes Kristy and I might help them when they need it, and there are times when they come and help us.” 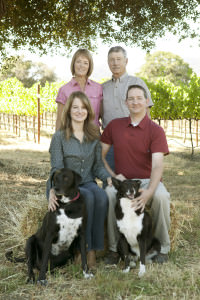 Bill in fact designed the tasting room/production facility and the group built it with “sweat equity,” as described by Joe. It is such a tight-family organization that Joe and Kristy live on the property in the house she was raised in and Bill and Nancy live in the house – also on property – in which Bill was raised.

The family is reflected in the name Foursight that stands for the number of generations that have worked on the one piece of property in the Anderson Valley, as well their goal – to look forward and provide for the future generations of the family.

Starting in the 1940’s, Charles family members arrived in the Anderson Valley, getting involved in the lumber boom of the time. The family stayed and maintained the property leading into the first Charles Vineyard planting in 2001.

The product has been a successful one as the Foursight wines have been recognized nationally and sales have shown strong growth through word-of-mouth and acclaimed reviews.

“(Highway 128) is not busy enough to support the winery,” said Webb. “It’s mostly a pass-through area.”

But great reviews in publications like the New York Magazine, Wine Enthusiast, the San Francisco Chronicle, the Wall Street Journal, Via Magazine and Sacramento Magazine, has created a buzz with people rushing to the Internet.

“Over three-quarters of our wine is sold through our web site,” said Webb, who oversees the production of up to 1,500 cases per year.

The Sauvignon Blanc, Semillon and the Pinot Noir are excellent wines on their own, but the family has taken wine production to an extreme with their labeling.

Back in 2011, Foursight became the first Anderson Valley winery to list ingredients on their wine labels and among the first in the United States to include a statement for vegetarian and vegan wine drinkers.

The statement, that includes the ingredients of grapes and sulfur dioxide, indicates that no animal-derived ingredients were used in the wine-making process.

Webb takes great pride when explaining the Foursight wine-making process is “traditional wine-making,” with the end goal to do as little as possible to their estate fruit each year. Webb makes some of his Pinot Noirs in either “unoaked” (aged only in the tanks) or “zero new oak” (aged in barrels two years or more old. Then there are the Pinots like the Paraboll (the name pays tribute to “Bootling” a crude language created in the Anderson Valley) that are aged in 50 percent new French Oak. 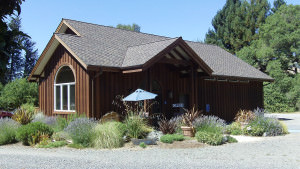 By using Bootling – their wine club is called the Eight High (a term to describe a pleasurable feeling resulting from imbibing just that right amount of local wine or spirits) – it adds to the overall experience and culture of the area. Add the quality of the wine and it is a winning combination.

All the wines I tasted were a joy and when combined with the wine-making process makes it enticing to potential customers.

“I think it does,” said Webb when asked about the process of production adding to the allure of the wine. “When we are listed among the best and then oh by the way, it is traditional winemaking, it has to help.”

For more information or to order some Foursight, go to www.foursightwines.com