If Tony Bennett recorded his classic 1960’s hit song today, he’d probably be crooning about leaving his bankroll instead of his heart “high on a hill” in San Francisco. With a modern-day bonanza being fueled by techies and millennials serenading a different tune, at least a couple of enduring treats that embody the heart and soul of the City by the Bay have survived – cable cars climbing “halfway to the stars” and public golf.

Within a cramped 49-square mile big-ticket landscape, San Francisco has been gifted an exceptionally diverse collection of communal golf courses layered with a rich frosting of history, from the architects who conceived them to some of the greatest wizards of the links who honed their skills on the sidehill, uphill, and downhill lies around the doglegged fairways – sometimes playing through three or four seasons during a single round! Native-born talent such as Johnny Miller, Ken Venturi, George Archer, and Bob Rosburg, all of whom earned a combined 58 PGA Tour victories, including five Major championships, played a major role in solidifying San Francisco as an urban golf city with no rival.

When Miller was asked how San Francisco would match up as a golf destination against others around the world, borrowing from the Yogi-ism vernacular, he once claimed, “It’s always windy half the time.”

Regardless of climate, if only Rosburg could be here now. Since his passing in 2009, San Francisco has been spoiled with six world championship teams and this year, the lone major in which “Rossie” was victorious, the PGA Championship (1959), makes its inaugural appearance in his home town when TPC Harding Park hosts the 102nd edition, August 6-9. And while the world will see a gem in Harding Park, it is but one jewel in the treasure chest of public golf in the city.

Unveiled in 1895, the Presidio Golf Course is San Francisco’s oldest course but the newest in the city’s public golf lineup. Originally, a group of civilians, who had formed the private San Francisco Golf and Country Club, were granted permission by the U.S. Army to build a nine-hole course overlooking the gateway to the San Francisco Bay on the military post known as The Presidio. In 1910, the course expanded to 18 holes, although military training occasionally still took precedence over golf along the fairways. With play once restricted to military officers and the likes of Joe DiMaggio, Babe Ruth and Dwight Eisenhower, the deceivingly long 6,481-yard hilly layout transitioned to a public facility in 1995, after the Presidio was decommissioned as an army base and became part of the Golden Gate National Recreation Area, a unit of the National Park Service. For locals and out-of-towners, it remains a mission worth the undertaking.

On the southwestern edge of San Francisco and surrounded by three marquee private clubs – Olympic Club, Lake Merced CC, and San Francisco GC – TPC Harding Park rounds out one of the most preeminent golf hoods in the world. While three of the four are member exclusive, the Sam Whiting/Willie Watson-designed Harding Park serves as the blue-collar complement where countless golfers have cut their teeth and had golf balls swallowed by the dense Cypress-lined fairways since 1925.

Yet, with all its notoriety, Harding Park became dilapidated and neglected by its steward, the City and County of San Francisco. That is until Bay Area golf legend Frank “Sandy” Tatum, a former USGA President and 1942 NCAA Men’s Golf Champion from Stanford, spearheaded a $16 million restoration project in 2002-03, to resuscitate the 18-hole, 6,845-yard gem, upgrade the inside Fleming 9 layout, construct a new clubhouse and establish a First Tee program. Harding’s resurrection caught the PGA Tour’s attention and was awarded the 2005 WGC-American Express Championship and the 2009 Presidents Cup (returns in 2025). Fittingly, during this Presidential election year, the PGA Championship will be contested on a course named in honor of the 29th Chief Executive and avid golfer, Warren G. Harding (1921-23), who met his demise in San Francisco.

The opposite (northwest) side of town bestows some of San Francisco’s money views, on land and sea, which are reason enough to challenge the city’s other presidential 18-hole namesake, Lincoln Park Golf Course. A relatively short (5,146 yards) and scruffy layout, it doesn’t quite match the majestic reputation of “Honest Abe,” (not sure of his golf connection!) but the Instagram backdrops of the downtown skyline and Pacific Ocean can create havoc during your swing. Especially, the granddaddy scene on any golf course anywhere – a sweeping vista of the Golden Gate Bridge from the downhill par-3, 240-yard, 17th tee box.

The city’s first muni course (1902), initially started with three holes built over a cemetery, is also the beneficiary of some notable architectural heritage from Jack Neville (Pebble Beach), Herbert Fowler (Royal Lytham & St. Anne’s, and Jack Fleming, who designed 21 other courses in Northern California. And if that’s not enough historical juice, these are the greens (albeit not in the same condition) where 1969 Masters champion, Archer, would hustle his neighborhood golf cronies.

Is time a factor? There are no two more contrasting nine-hole adventures than Fleming’s designs at Golden Gate Park Golf Course and Gleneagles Golf Course at McClaren Park. While one is, literally, a walk in the park the other is considered one of the most challenging nine holes of golf in America.

Weaving seamlessly throughout a tranquil park setting and a quick walk from the Pacific Ocean, Golden Gate Park GC (1951) consists of all par 3s, making it a comfortable track for beginners. But don’t be misled. This sneaky challenge with holes ranging from 101 to 194 yards playing over undulating terrain claimed a notch on GOLF Magazine’s lineup of the thirteen best par 3 courses in America. And when Karl the Fog rolls in, count on extra deliberation for which club to use.

On the other side of the links’ spectrum, Gleneagles GC (1962), is a combination of a tenacious layout and the sitcom Cheers. As once reported in the San Francisco Chronicle, “Lee Trevino fired a 71 the first time around, and then, after he got to know the course a little, he fired a 73.”

Known mostly to locals, both high handicappers and scratch players have relentlessly confronted the typically, hard pan, tilted fairways rambling through Cypress and eucalyptus trees and putts breaking toward the Cow Palace. Along the routing, players may also find themselves sharing the fairways with disc golfers but once the final numbers are posted, the die-hard faithful end up sharing head scratching stories in the Scottish-style pub dubbed Old Peculiar’s, the only part of the course that may resemble the similarly-named track in Scotland.

It’s been six decades since Gleneagles became the last golf course planted in San Francisco and with the city’s lack of suitable open space, that streak is destined for perpetuity. But that hasn’t prevented some local “imagineers” from injecting some golf amusement to several inner-city locations to test putting skills. Call it putt-putt or mini golf, the greens run fast and wacky around iconic landmarks such as the Transamerica Building and Painted Ladies. Plus, these arty, well-designed, interactive venues require no tee times and zero experience on a “real” golf course. 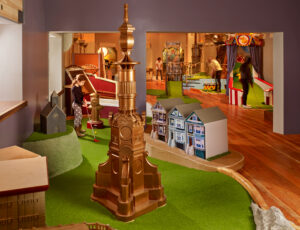 The city’s first indoor adventure, Urban Putt in the Mission District invites customers to drop a token in one of the four oversized gumball-like dispensers filled with red, purple, yellow and blue golf balls and take a crack at the 14 high-tech holes showcasing many of the city’s iconic landmarks. To set the tone, be prepared to shake, rattle, and putt on hole No. 1 equipped with sensors inserted into buildings causing them to simulate the 1906 earthquake.

Surviving that major disaster and now one of San Francisco’s iconic tourist attractions, Ghirardelli Square is home base for Subpar Miniature Golf offering putting entertainment around a tour of the city’s prominent sites.

Tucked into an enviable plot in Mission Bay and walking distance to Oracle Park and Chase Center, Stagecoach Greens presents putters a crazy, historical journey from the Boom and Bust in California to the innovations that have shaped today’s San Francisco experience. It is the city’s only outdoor mini golf venture, complete with cabanas, food trucks and a bar. Should you finish all 18 holes after braving the occasional inclement elements, you’ll be rewarded with the coveted “All-Weather Golfer” pin, a badge of honor that should be a staple at every golf course in San Francisco.