Right after its opening with a celebrity chef in 2014, Jimmy’s became a go-to fine dining restaurant on Lake Tahoe.

Located in the Landing, a five-star boutique hotel transformed from an older property, the restaurant is situated in a wonderful location across the two-lane Lakeshore Blvd. from the Lake Tahoe beach. Dining in late August, we had a choice between looking out the window at the lake or sitting on the glass-enclosed patio with its large fire pit. Given the breezes that were coming up, we decided to enjoy our meal inside.

Our server, Kevin, worked with the kitchen to fashion a food-and-wine pairing with smaller portions of signature dishes. The restaurant and hotel were founded by Jim and Nancy Demetriades and originally featured Greek food and a huge 1,500-bottle wine list. The property was sold to the DiamondRock Hospitality Company earlier this year and, under a new executive chef, the menu has been simplified while maintaining some Greek favorites. The wine list also has been pared down under the management of Two Roads Hospitality.

The menu changes with the season and is anchored by wood-fired grill and oven that both are fueled with oak. That allows the chef to serve dishes with a wonderful smoky fragrance. Incidentally, if you are looking for fresh seafood from Lake Tahoe, you better catch your own and bring it in. Law forbids the restaurant from buying commercially caught fish from the Lake, but they are happy to cook your fresh catch. 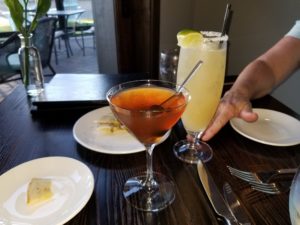 We started with craft cocktails, Jimmy’s Manhattan for me—made with with Amaro Montenegro, Blanton’s and a smoky rinse of Laphroaig. My bride opted for the Cascade Falls Margarita Cascade featuring Cazadores Reposado ($16). They offer 13 craft cocktails in addition to a full bar, local draft beers and a selection of bottled beer plus wine by the glass.

Pita bread with dressed with oregano, shallots, garlic and olive oil accompanied the cocktails as did our first Greek small dish. The wood-fired octopus was braised for four hours and then charred over the wood grill. It was served with small roasted potatoes, green beans with a creamy taramasalta sauce that complemented the squid perfectly. The smoky octopus picked up the smoke twang of my Manhattan. 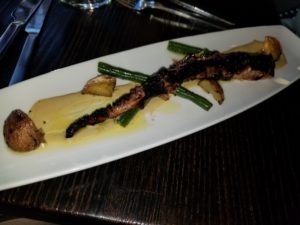 Kevin followed by serving two Greek specialties: Zucchini Keftedes and Kataifi. The shredded zucchini is rolled into a ball and breaded and fried. It was served with lentil tabbouleh with a Greek ranch dressing. Very tasty and the same goes for Feta that was wrapped in shredded phyllo and topped with a raisin oregano dressing with Greek organic honey.

From Jimmy’s wine by the glass list, restaurant supervisor Claire matched these with “The Blindfold” white blend from Prisoner. It includes Chardonnay from Sonoma County complemented by Rhone varietals from Santa Barbara and Grenache Blanc. It complemented both appetizers well.

We then enjoyed a roasted beet salad over Gem lettuce with grilled halloumi (firm cheese), grapefruit and prosecco vinaigrette. The flavor combination was great. It was paired with a crisp Kim Crawford Sauvignon Blanc from Marlborough, New Zealand.

Turning to entrees, they had a common theme—featuring pancetta or bacon.

We could not pass on the Chilean sea bass, served with bacon, potatoes and onion. The chef on duty decides how to prepare the fish of the day. This was delicious served with the Rhys Vineyard Pinot Noir from the Santa Cruz Mountains. The Pinot picked up both the fish and the bacon nicely. 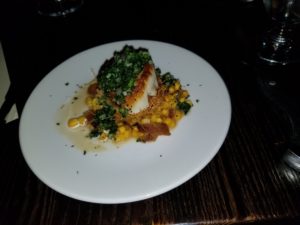 The seared sea scallops were nested in crispy phyllo with lardons (pork belly, AKA bacon), a summer corn ragout and topped with salsa verde. The scallops were huge (U-10 to a pound or bigger). A normal entrée portion is just three scallops. Seared perfectly with a soft center, it was highlight, particularly when paired with one of our favorite wines, the Sonoma-Cutrer Chardonnay from the Russian River Valley.

Our final choice was Colorado Lamb Rack served with grilled asparagus and a potato-mushroom-pancetta hash. Kevin selected a French Rhone wine, Chateauneuf-du-Pape from Dom. Vieux Lazaret. It was a wonderful complement to the lamb and hash as we finished an unusual version of surf-and-turf. 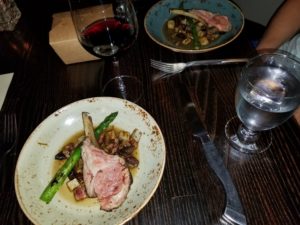 The dessert menu ranges from Lava Cake Chocolate cake to a chocolate mousse to a crème brulee, baklava, Coupe Romanov for two with strawberries, ice cream and raspberry coulis. We opted for simple—blueberry and vanilla ice cream sourced from Gardnerville, NV just over the Kingsbury Grade.

Because Jimmy’s serves as the restaurant for the hotel, breakfast, lunch and dinner are served as well as happy hour specialties. You can sit inside in private alcoves with their own fireplace, at window seats looking out on the lake, or at fire pits on the patio or the rooftop deck.