Visiting the Safeway Food and Wine Pavilion is a must if you attend the Safeway Open PGA Tour event at the Silverado Resort and Spa in Napa.

The 25,000 square foot tent that is located behind the 1st green, as well as alongside the 17th fairway, has outside seating on both the front and the back, allowing fans to view action on one of the two holes that it borders.

It also has a mass of inside seating with a sports bar feel as there are huge screens allowing people to watch the tournament in a wonderful climate-controlled atmosphere.

There is a large selection of beer, wine and spirits – some of the finest wines the Napa Valley has to offer. In addition, there are four food options, with Safeway, the title sponsor, offering dining options, as well as three legendary area chefs offering their products in Thomas Keller, Morimoto and Charlie Palmer.

Keller’s Drive-In Cuisine by the Green was off the hook good. The food options did not come from Keller’s world-famous French Laundry, but two other of his restaurants – Ad Hoc + Addenum and Bouchon Bakery.

We had a chance to sample a couple foods and all I can say is – Wow!

The staff served us with a bucket of Buttermilk Fried Chicken, as well as the Lobster Roll. 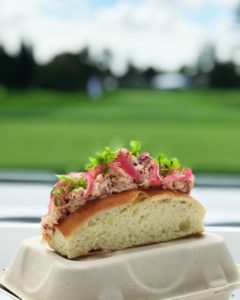 I am more of a BBQ chicken type guy, but after eating Keller’s fried chicken I may have to reconsider. It might have been – my buddy I was with says it was for him – the best fried chicken I have had the pleasure to eat. It was flavorful, moist and everything you would expect from one of Keller’s kitchen. The Lobster Roll was equally impressive and was so large, we split it and still didn’t finish it.

As the bucket of chicken sat on your table, people repeatedly walked by commenting on how good it looked. We even persuaded a couple of passers-by to try it and their response was the same – Wow!

The kicker was at $30 for a bucket at the event – it was a worthy purchase as it easily feeds three, if not four people.

The Lobster Roll is easily a meal itself and at $20 is not a bad rate for such high-quality food.

One item we didn’t get to try, only because we had no room in our bodies to eat, that we heard others rave about, is the Brie-L.T. Sandwich, a vegetarian dish, with the Brie replacing the traditional bacon and it includes Truffle Butter as well.

A new thing this year is the availability of being able to order on-line. You are out on the course watching the golfers and you get a little hungry – no problem, order on your phone and by the time you get the tent, your food will be waiting for you!

Go to https://squareup.com/store/safeway-open to order on-line.

If you make it out to the Safeway Open this weekend, so yourself a favor – stop in at the Safeway Food and Wine Pavilion and pick up some Fried Chicken from Thomas Keller’s Drive-In Cuisine by the Green – you won’t regret it!