He’s operated Eddie Papa’s on Hopyard Road in Hacienda Business Park for a number of years, but wanted to have a downtown location.

The Clubhouse in the bar area, serving tasty casual food, opened last year, while the fine dining, Lilly’s, opened in January. When the weather warmed up, they opened the expansive patio area so guests (there are not hotel rooms) have a range of choices.

We dined at Lily’s Spirited Dining on a quiet Thursday night—we had the dining room to ourselves and traffic was light in both The Clubhouse and on the patio (it was a hot afternoon and Barone’s Thursday night concert series was in full swing).

Our personable and accommodating server offered both Lily’s menu and The Clubhouse menu and said we were free to order food or beverages from either. The fine dining menu changes seasonally and has been more limited since Executive Chef Ryan Osentowski is staffing the kitchen alone. It was out-of-date on the website in the third week of August, which was a shame because both the sea bass and seared scallops looked appetizing. 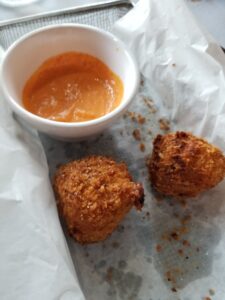 We opted to start with the Smoked Gouda and Bacon Croquettes—like a deep-fried dumpling ($10). The croquettes were accompanied by a zippy dipping sauce (chipotle piquillo pepper aioli) that my bride said also went really well on the warm bread that started our meal.

Perfect comfort food and plan to share—they would fill you up quickly.

A note: with access to The Clubhouse menu as well as Lily’s, there was a huge range of options for starters, salads and other selections.. 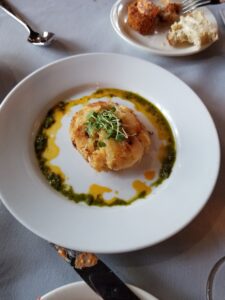 The highlight at Lily’s, however, was one immense crab cake ($10). It was all lump meat crab with none of the ordinary breading filler. Just a large serving of crab that three of us split. Complementing the crab were basil chimichurri and sweet pepper gastrique. Order two and a salad and there’s a fine meal.

The crab cake complemented the Occasio Chardonnay ($48) from Livermore. The Clubhouse has a wide-ranging wine list (French, California, Washington, Italian, New Zealand) plus a large list of craft beers. In both cases, local wineries and breweries are represented.

When it came time for entrees, my bride opted for the grilled Pacific salmon over a cannellini bean ragout accompanied by fresh green beans with and dressed in a lemon beurre blanc ($23). She loved the salmon, which was perfectly cooked, and the bean ragout was a nice alternative to mashed potatoes. 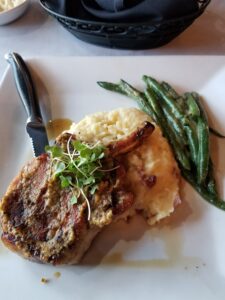 Our guest from Holland, Janneke Schmers, who was in town for her 50th high school reunion (she attended Amador Valley High in Pleasanton and lived with my wife’s family as an exchange student in 1968-69). She made the best entrée choices, selecting Dungeness Crab Risotto served with shitake and cremini mushrooms in a lemon basil oil sauce ($30). I would have swapped her instantly after tasting a bite.

I opted for the smoked Sakura pork chop with garlic green beans and mashed red-skin potatoes ($32). The chop was grilled with a bourbon mustard sauce that gave it a nice glaze. I found the chop a little chewy on some bites and would readily opt for the crab next time. The Pinot Noir from the Santa Lucia Highlands was a good choice to complement the entrée. 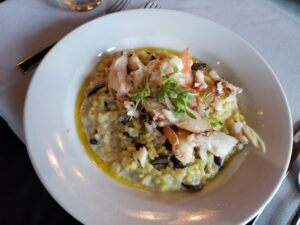