*This is a story previously published in ACES. The green fees have been updated.

The Pacific Grove Golf Links has been called a lot of names over the years, but the most popular–“The Poor Man’s Pebble Beach,” – is also the one that bothers the Head PGA Golf Professional Joe Riekena the most.

“We try to go away from that,” said Riekena of the nickname. “It makes us sound cheap.”

In reality, the fees for Pacific Grove are cheap, especially when compared to the other courses on the pricey Monterey Peninsula. At just $43 Monday-Thursday and $69 Friday-Sunday and on holidays, the Paci­fic Grove Golf Links is arguably the best golfing deal in all Northern California.

And forget any thoughts of “cheap” at these rates.

Greeting the golfer is a very pedestrian front 9 that winds inland through fairways lined by Cypress trees and boasting the occasional view of the Monterey Bay.

The front half of the course opened in 1932 and was designed by former U.S. Amateur Champion H. Chandler Egan. In 1960, when the second nine opened, the course took a leap to the next level.

California golf course designer Jack Neville took a different direction, opting for a seaside links design, utilizing the sand dunes and the bordering Pacific Ocean. What he created is what you get at other courses in the area, particularly the views, at a fraction of the price.

Having played all the courses, the comparison of the views is valid. Starting on the 12th tee – Riekena’s favorite hole on the course – the views are sensational. 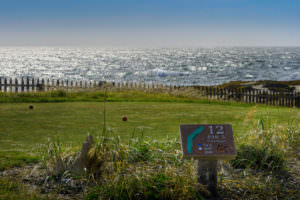 As you come of the 11th green, you walk up the sand dunes to the 12th tee and the treasured view. For the next six holes, you are treated to incredible vistas as you play through the sand dunes with the ocean mist heavy in the air.

The ocean breezes help or hinder the golfer, but make no mistake about it, it is hard to be frustrated when you feel like you are playing on the beach.

The 12th plays closest to the water, while the next three holes play somewhat uphill, giving the golfer great views of the ocean and the rest of the back nine.

The 16th plays downhill, with the green framed by the ocean, with No.17 a par 3 that plays with the ocean to the left and a pond in front. Looking for spectators to watch you play the hole? You will get some, as the road full of tourists often take great pleasure watching your tee shot.

The 18th hole plays back up towards the clubhouse, but once you are on the green, look back down the fairway for one final great view. In addition, the course is very fair and open for players of all abilities.

“I think the number one reason to play the course is the beauty of the back nine,” said Riekena, who oversees 55,000 rounds a year on the course. “Then there is the affordability and the play-ability.”

All of them are incredible courses – among the best in the nation – but if you are on a budget, good luck.

“You can play ten rounds here as opposed to one at Pebble,” added Riekena.

For more information on the Pacific Grove Golf Links, visit:http://www.playpacificgrove.com