If you are taking a vacation to San Diego, especially with the family, the San Diego Zoo Safari Park is a can’t miss.

The Safari Park is an expansive wildlife sanctuary that is home to more than 3,000 animals representing more than 300 species. Its renowned botanical collection represents 3,500 species and 1.75 million specimens. Over half of the Park’s 1,800 acres have been set aside as protected native species habitat. It is located 30 miles north of downtown San Diego in the San Pasqual Valley near Escondido.

Our first thoughts entering the property was how immaculate everything was. Honestly it was like the Disneyland of zoos, spotless everywhere you looked, be it the walkways, dining facilities and exhibits.

The Safari Park is like a zoo on steroids. There are the standard zoo exhibits, concession stands and gift shops, but the cleanliness of the park, together with realistic replications of various animal habitats, along with the beauty of the botanical displays, makes for a tremendous day.

The highlights of the visit are taking one of several tram ride options. There are four different tram rides.  The Africa Tram is the option that comes with your admission, thus the most popular. Other options are the Behind-the-Scenes Safari (takes you into keeper only areas); Caravan Safari (ride safari trucks into the exhibits, meeting the animals up close and personal); and the Cart Safari (a tour around the Africa and Asia areas by cart).

The Africa Tram takes 30-40 minutes and takes you around the outside of the Africa section, giving you a closer look animals such as rhinos, giraffes, cheetahs, lions, zebras, antelopes, etc.

There is a guide that speaks throughout, informing as to which animals you are seeing, but more importantly, they educate the visitors as well. Ideal for kids as when a child is having fun learning, their retention is that much greater.

One of my favorite experiences outside of a tram ride, was the Cheetah Run. Once a day, weather permitting, you can get an up-close look at the speed of a cheetah. They have a fenced-in area made to look like a natural habitat for the cheetah. In the middle is a 330-yard track that has a mechanical lure that pulls along the favorite toy of the cheetah. 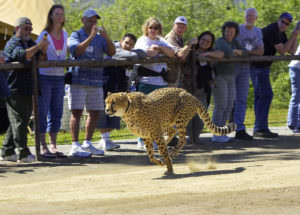 Once the toy is sent on its way, the cheetah is released from their cage. Those lucky enough to get to the fence to watch see the cheetah go from a standing start to 70 miles per hour in just four seconds. Having seem film footage many times of a cheetah running, I still wasn’t prepared for the amazement of seeing how fast the animal is in person.

There is also the Jungle Ropes Safari! Challenge yourself with this daring experience that offers three different courses, each one containing more than a dozen elements. With rope bridges to cross, aerial tightropes to navigate, swinging log steps to negotiate, and moving platforms to cross, among many other thrills, Jungle Ropes Safari is for adventure seekers ready to try out life in the treetops. At some points, you’re more than 35 feet off the ground! 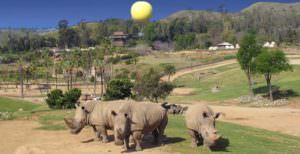 Finally, if you want to get something to eat – or an adult beverage or two – try the Rift Sand Bar at the top of the Elevator Deck. The deck rises above the African Outpost, providing a stunning view of the area and is very relaxing. Access is by elevator or by climbing a seemingly endless number of stairs.

While it’s easy to get caught up the general zoo experiences, there is an educational aspect of the Safari Zoo visit that sets this place apart from a lot of other zoos I have visited.

It was during the African Tram ride were told about the conservancy efforts of the San Diego Zoo organization.

The wide-open, multi-species exhibits provide a great environment for breeding endangered animals such as the Przewalski’s horse, Arabian oryx and Grevy’s zebra. Many of the animals that have been bred at the facility have been introduced into the wild.

The California condor were down to 22 left in the world when some came to the park, but there are now 400, over half are now flying free.

In fact, there are two births a day at the park.

The Safari Park also provides opportunities for animal behavior and health studies that would be difficult, if not impossible to conduct in the wild. The results are then shared with agencies around the world.

As mentioned above there were children of all ages on the tram and the majority were in tune to what the guide was explaining.

If you are visiting the San Diego area – with children or without – a visit to the San Diego Safari Zoo Safari Park should be on the must-do for everyone. It’s a tremendous experience for the family, but my wife and I had a wonderful time on our own.

For more information go to http://www.sdzsafaripark.org/