If you are headed for Finland this summer, pack your golf shoes, a couple of sleeves of balls and your glove, because the Vanajan Linna Golf and Country Club opens this month.

A beautifully laid out course flows between trees and sloping hills. It is easily walkable, although I was glad to have a cart and a willing Finnish golfing buddy, Anneli.  Anneli and her husband, Markku, were wonderful partners for the day at Vanajan Linna. These two Finnish golfers find a way to play 120 times a year and do so by starting in warmer climes in winter. Markku leads some golf tours to and through other countries such as Turkey and Spain. 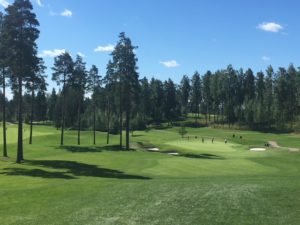 They said there are many beautiful courses in Finland. They mentioned several in Espoo. In Hämeenlinna (located an hour north of Helsinki) there are six courses. I stayed at the castle hotel in Vanajan Linna and enjoyed the facilities at the club house. The second day of my stay I was scheduled to play in the afternoon after the championship tourney of clubs around Finland. It was pouring rain in the morning, but these hardy souls, men and women, played through the rain and were rewarded with a beautiful sunny afternoon. Sitting out on the patio area for lunch would be very nice. 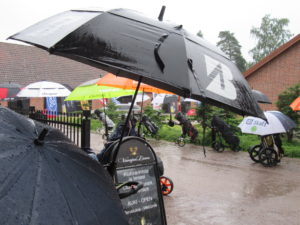 Rain did not deter the golfers

I liked the Vananjan Linna course with its longer holes and the challenge of uphill drives. The driver is my best club and I put it to good use. This course was more than a walk in the park chasing the little white ball. It was relaxing, refreshing and rejuvenating. The views from some of the tee boxes down through the flowing fairways was beautiful. The flowers in full bloom were stunning.

Since it opened in 2005, the course has hosted many prestigious tournaments in addition to business events. Some of the events included:  Finnish Open 2007, SK Golf Challenge 2009, European Amateur Championships 2010, European Amateur Team Championship 2014 and the latest European Tour Properties Senior Classic 2017.

In addition to the golf experience, I enjoyed the club house lodging and the meals at the castle hotel. Vanajanlinna was built in 1924 by Carl Wilhelm Rosenlew as an exclusive hunting lodge for the Finnish elite such as Finnish Marshal C.G.E. Mannerheim. When the Rosenlews were selling Vanajanlinna in 1941 there were two willing buyers: Finland president Risto Ryti and a German arms manufacturer Willy Daugs.  Ryti wanted to make Vanajanlinna the summer residence of the Finnish president.

When the Finnish Minister of State was changed the permission of purchase was granted to Daugs without the president knowing about it. From 1997 onwards Vanajanlinna has served guests as a castle hotel – the only one of its kind in Finland. It is beautifully furnished and elegantly situated on the Lake Vanajavesi. This lake is 19 miles long and stretches all the way up to the summer cabin of my Finnish sister, Hilppa. She was eager for me to come to Finland to enjoy this area and several of the other golf courses.

I enjoyed the wonderful European buffet breakfast, with cheeses and meats, Finnish rolls and breads, cakes and tortes. There were cereals and fruit. The coffee was wonderful, with or without the cream. 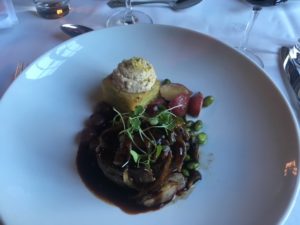 I had two amazing dinners. The most interesting note at the second meal was the waiter’s recommendation of a California zinfandel from Western Cellars. He volunteered that would pair best with the two entrees we had chosen– Tournedos Vanajanlinna with onion sauce and a scalloped potato like dish called potato-duck foie gras millefueille and roasted chicken breast with asparagus and yogurt sauce, which had raisins and other vegetables. Both dishes were beautifully presented and tasted delicious.  And, yes, the red wine went well with these dishes. 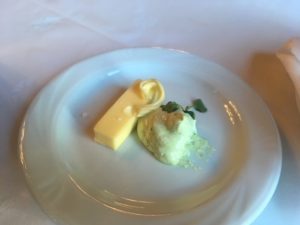 We had begun the meal with the Waldemar goat cheese panna cotta with grilled sweet pepper, air-dried ham and a romesco sauce as one starter/appetizer and the other was a beautifully presented beef tartar in a basil sauce with grilled asparagus and herbed tomatoes. The portions were just enough to increase a desire for more, but knowing what was next served to curb the appetite.

Dessert was a special delight. The Sacher version 2017 was apricot ice cream next to a slice of Sachertorte with a chocolate ganache on the side. Perfect portion to delight, but not overwhelm. The other dessert was the forest berry parfait, yogurt ice cream and fresh berries. The crème fraiche on top was superb. Scrumptious! I was sharing this meal with my sister, Sally. We came to Finland for the wedding of Minna and Lauri, son of Hilppa. 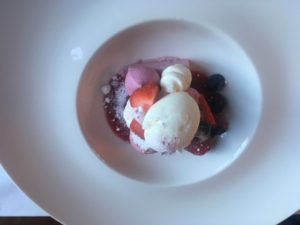 The accommodations at the club house were comfortable and functional. It included an indoor sauna, a must for any Finnish home. A business client would enjoy the technical features of Wi-Fi and computer network available for business meetings. Comfortable chairs and table and nice couches were also available.

My days at this Vanajanlinna Golf club and hotel were a highlight of my time in Finland.

I also had the opportunity to play at one of the oldest golf clubs in Finland, Hugo. It was built in 1940. It is a very interesting course with the long lake also featured here. The course is long and is nine holes. Two holes require tee shots over trees that cross the fairway. It calls for a well-aimed low worm-burner roll, or a lay-up and then a shot through the trees.

The course is in the middle of a park which has lots of walkers. They have the right of way, so the golfers must wait their turn. There was also an opportunity to tee off from the top of an elevated platform. Golfers get some stairs mixed into the steps gained while walking this beautiful course.

The greens were well maintained, and the rains of summer keep the fairways nice. The men’s club at this course call themselves the Silicon Valley of Finland, Suomen Tilaakso. Within the boundaries of Hämeenlinna there is a concentration of six nice golf courses. More to play next visit! 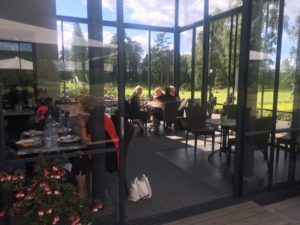 We visited the club house for a buffet lunch of the Eversti –  Aulanko Golf course. It was a great deal and very filling. This is another wonderfully laid out course, which is walkable. The Finns love to walk and hike and have long summer days to enjoy their beautiful country.

Besides the wonderful golf there is sailing and swimming in the lakes, and, of course, sauna at least once a day. But sauna is also a winter activity to enjoy. There are a 5.5 million people living in Finland and at least that many saunas.

Winter or summer there are many things to enjoy in Finland. So, when headed for Finland in the summer, consider bringing your shoes and gloves, if not your sticks.