The tagline for Passionfish restaurant in Pacific Grove is “food from the heart” and it’s become a favorite of locals and visitors to the Monterey Peninsula alike.

Located in the heart of downtown at 701 Lighthouse Avenue, Passionfish is built on serving sustainable seafood and slow-cooked meats using organic ingredient complemented by an amazing wine list that features dozens of wines from little known wineries.

The husband-and-wife team of Ted (chef) and Cindy Walter opened the restaurant more than 16 years ago in what started 60 years ago as a Sambo’s restaurant. Three narrow rooms and one larger dining area make up the restaurant, with benches along the walls of the narrow rooms complementing tables and chairs in front of them. The décor is clean and simple with brown paper covering the white table clothes—a good call to wash less in a certified green restaurant.

Ted is a classically trained French chef who has pursued his passion for nearly 40 years. Cindy grew up the daughter of a fisherman so the focus on fish is a natural one. Incidentally, Cindy recommended a second restaurant for our two-day trip, La Balena Cucina in Carmel.

Ted commented that he has prepared literally thousands of seafood recipes, but much fewer doing the slow-cooked meats he prefers. On the seasonal menu in mid-January were a braised Wagyu beef and a spoonable 12-hour lamb breast that was seasoned with a cloves and allspice in a sauce with chickpeas. The mix of flavors was reminiscent of some Indian foods. It was paired with a 2010 Cabernet Sauvignon from nearby Joulian Vineyards in the Carmel Valley that celebrates its 25th harvest in 2014.

Joulian winemaker and owner is Ridge Watson, the brother of Hall of Fame golfer Tom Watson.

Ted changes the Passionfish menu daily depending upon what he finds at the farmer’s markets.  The mid-winter menu contained seasonal vegetables such as chard, parsnips, brussel sprouts, apples and carrots as well as fresh Dungeness crab served in both crab cakes and a delightful salad with avocado. 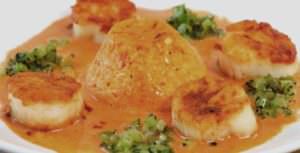 We asked for tastings paired with wines that showed off the best Passionfish has to offer.

Our server, Candace Villarta, started us with a striped bass crudo complimented with a wonderful pomegranate-ginger granite with a seaweed ponzu on the side. The bite-size bass vanished quickly, particularly when paired with the Robert Serol Gamay Rose sparkling wine from Loire. It was a special for the evening. 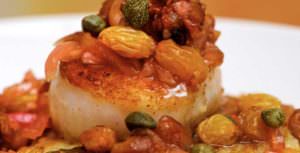 The next course was a sea scallop—perfectly prepared—served on an artichoke risotto cake with a caper-yellow raisin and walnut relish, as well as a Dungeness crab and avocado salad dressed with spicey ginger vinaigrette. We were not alone in raving about the Dungeness crab salad—numerous other diners on a busy Saturday night also were enjoying the taste treat. Of course, the scallop and risotto cake also was delightful. 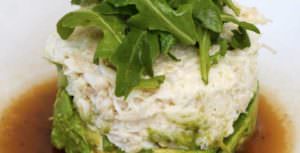 The dishes were paired with a 2012 Lioco Chardonnay from Sonoma County that is one of the white offerings by the glass from a small producer. It was full of fruit character, attesting to 85 percent fermentation in stainless steel and 15 percent in neutral oak.

The paired wine, a Wrath “Fermata” Monterey Chardonnay, came from the 25 selections on the white half-bottle list.

We enjoyed two entrees—the aforementioned 12-hour lamb breast—and then the one of the specials of the evening—butter-poached fresh Maine lobster tail. It was about an 8-ounce tail—a substantial portion for one, but perfect to split and enjoy with a Wrath “Fermata” Monterey Chardonnay, one of the 25 selections on the white half-bottle list.

The four seafood dishes we enjoyed featured recipes preparations and pairings—what was common to them was the perfect preparation. That stems from Ted’s commitment to sustainable seafood.

When the restaurant opened, thanks to Cindy’s connections in the fishing industry, Passionfish could buy lots of seafood locally. As stocks of fish in Monterey Bay declined and the marine sanctuary was established, Ted expanded his suppliers so he now sources seafood from across the country and world. The Dungeness crab was local, but it 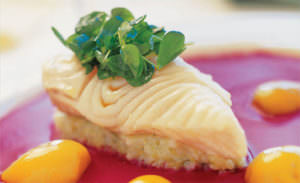 For dessert, we enjoyed a pear bread pudding with a Madeira-caramel sauce as well as a Straus organic mint and espresso mud pie. What a capper to a wonderful meal, particularly the mud pie—not normally a dessert I would order. It is on the list when we return.

As we sat back and enjoyed our coffee, we reflected on why locals love Passionfish.

The food is superb and, given the prices, is a remarkable value. Only one entrée on the regular menu—the sea scallops—was more than $20 ($26). The rest were $20 or less and portions were generous.

Mix in a amazing wine list, with offerings by the glass, half-bottles and magnums from lots of unknown wineries, makes it a wonderful restaurant to experiment with wines. Wines are priced at about retail instead of the normal multiples of retail in the restaurant industry and the serving staff are trained to offer suggestions.

Buying wine is handled by Jannae Lizza who has been with the restaurant since the Walters opened it, teaching herself about wine and building a unique list of offerings.