The Pebble Beach Resort golf courses receive most of the national media attention when it comes to the Monterey Peninsula, but locals and avid golfers alike know that Bayonet and Black Horse courses on the former Ford Ord represent both an excellent value and a quality golf experience.

The courses underwent a $13 million renovation that was completed in 2008 after the city of Seaside bought the courses from the Army after Fort Ord was closed in the 1990s. The two courses share the same bluff above Monterey Bay (ocean views are featured on several holes), but they are sharply different, although both feature greens with plenty of humps and hollows, dramatic breaks and slopes. Three members of our foursome putted the ball off the green when they were above the hole on one sharply canted green. 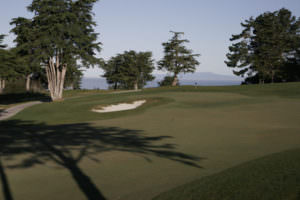 Bayonet was designed by Gen. Robert B. McClure, a left-handed golfer prone to slice, in 1954. The course is characterized by narrow fairways bordered by mature oak and cypress trees. If your shot goes into the trees, the good news is that, for the most part, you will find your ball and have at least a punch-out to the fairway. The good general created the holes 11 through 15 as sharp doglegs to help him play around the corners with his generous fade.

The Black Horse course, which was added 10 years later, is much more open from the tee with almost no out-of-bounds markers or opportunities to lose a ball with an errant shot. That said, the greens and the bunkers (there are plenty of bunkers on Bayonet, as well) make it quite a challenge. Both courses take full advantage of the downhill and uphill opportunities to challenge golfers. For instance, No. 9 on Bayonet is an uphill, slight dogleg that plays 476 from the tips.

Both courses are named for combat regiments.

We played with a gentleman from Livermore who was quite familiar with the golf course. That helped off the tee, but when it came to hitting the right spot on the green, good luck. Dramatic slopes and swales characterized these greens—bring your A putting game. 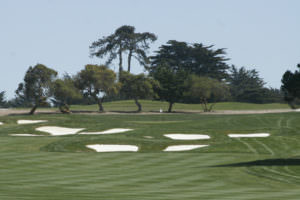 It was notable before we teed off the starter directed us to one of the practice putting greens that most closely mimicked Bayonet so we would have a better idea of what to expect.

The clubhouse is serviceable with a well-sized grill (complete with flat screens) that is complemented by a glassed-in patio.

For tournaments seeking a 36-hole venue at a price point substantially less than the Pebble Beach Co. courses (Pebble, Spyglass and Spanish Bay), Black Horse and Bayonet are championship caliber courses that can be set up to play well for the more casual golfer. The PGA club professional championship was staged here in 2012.

There is a substantial practice area with a big range as well as a green for chipping and practice from the sand traps—do take advantage of tuning up your sand game. Be sure to warm up well because both courses open with par 5s (Bayonet starts with par 5s on both nines and closes on 18 with a par 5).