Blair was born in Macomb, Illinois, but shortly thereafter her family relocated to Arizona where she spent the rest of her childhood.  At the age of 11, Blair’s dad enrolled her and her brother in a local junior golf clinic, and ever since Blair has rarely put down her clubs.

Blair found success in her junior golf career including, a selection on the U.S. Junior Ryder Cup Team in Valderrama, Spain and a selection to AJGA Cannon Cup Team.

After high school, Blair made her childhood dream a reality and accepted a full ride scholarship to Arizona State University. She competed all four years on the women’s Sun Devil golf team and was also crowned a two-time NCAA women’s long-drive champion.

After college, Blair quickly turned professional and about the same time, booked her first modeling gig. For two years Blair fought financial instability and then a broken foot, and eventually made the decision to put her golf game on hold and turned her attention to her modeling career.

After nearly five years of modeling, Blair got a call from the Golf Channel asking if she would be interested in competing on their reality television program, Big Break. Given only a month to prepare in the spring of 2009, Blair competed on the Golf Channel’s Big Break: Prince Edward Island and she finished runner up. 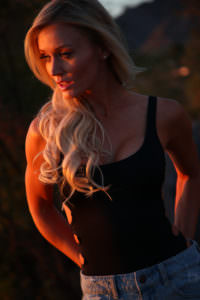 Later, Blair received another call from the Golf Channel asking her to come back to do another Big Break reunion show. This time she was fully prepared. In the fall of 2010, Blair competed on Big Break: Dominican Republic and was eventually crowned the champion.

Later in 2010, although falling just short of obtaining her LPGA tour card, she got back her full status on the LPGA Symetra Tour.  Starting in 2015, Blair started her transition into the media world, giving up playing competitive golf on a full-time basis. Currently, she maintains a fully loaded calendar mixed of media opportunities, corporate outings, and competitive tournaments.

Recently, ACES editor Dennis Miller had a chance to interview Blair about a variety of subjects.

If you want to catch up on other ACES profiles, go to https://acesgolf.com/category/lifestyle/personalities/

How did you get involved in golf?

My dad entered me in a junior golf clinic when I was 11.  I had never played before and really enjoyed it!  When I hit the ball well, I hit it pretty far for my age… so it sparked an interest.

I have read that your golf career was somewhat on hold when Golf Channel called? What was going on and how was golf viewed in your life at that point?

Immediately after college, I began juggling modeling and professional golf and booked my first modeling job with Golf Digest calendar.  Modeling was how I paid my expenses for tour life.  Both jobs were very demanding… there just came a time where I needed a bit of a break. Coincidentally, I broke my foot around the same time, so I was forced to take some time off.  I went back out on tour the following season on a medical exemption.  However, I then had a death in the family which brought be back home. The collection of events took me off the golf course indefinitely, but I decided to pursue more modeling opportunities.  I never gave up on golf… in my mind it was just a break… and it was. When I got the call from Golf Channel to be on Big Break, it kick-started my golf career again.

Talk about the Big Break appearances and what they did for your golfing career? Was there anything special that you learned in those two events that has carried over in your life?

My Big Break experiences were all about the perfect timing in my life.  Let’s just say my flight home from Dominican Republic was a lot more enjoyable than my flight home from PEI when I finished runner up.  But both Big Breaks were huge for my career.  I proved to myself that I could perform under intense pressure and win.  Playing well on the show and winning gave me a ton of exposure, opened doors, and led to a great relationship with the folks at Golf Channel. 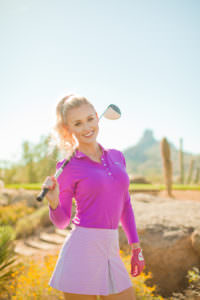 I have always hit the ball far and it’s always been the strength of my game… consistent and long off the tee.  In college, my coaches and teammates called my “Boom Boom”. There are definitely differences in my long drive swing versus my competition swing. For one, the equipment I use is different. Plus, I try to hit up on the ball and with a big draw for long drive. This is quite different from my competition swing as I naturally hit a fade off the tee. Long Drive is so different from competitive golf because it’s not really about consistency… it just takes crushing one really good one.

Is there any comparison between golf and modeling in preparation?

Both take a lot of time, patience, and the right mental state.  Modeling is demanding and it’s your job to give the right look and feel for a shoot. You have to have really thick-skin in both careers.  I don’t think either can ever be perfected.  Both are very challenging and that’s what keeps my interest.  There are a lot of similarities… but at the end of the day golf is harder.

What piece of advice would you give an aspiring golfer?

Play as many competitive rounds as possible, keep a journal of your ups and downs, and make it a goal to enjoy every shot in tournaments.

Favorite course you have played?

Is there one course you want to play that you have not played yet?

I would love to play golf in Ireland. 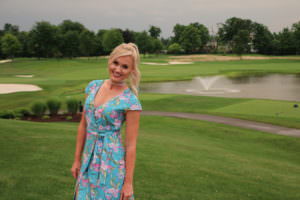 Best part of playing golf, besides the professional aspect?

The people you meet and places you travel.

What would be your dream foursome? Players can be living or deceased.

Biggest influence on your golf game?

My dad and my old coach, Verde Dickey.

You have a lot going on with TV, modeling, playing and other interests. How tough is it to balance your time so the proper attention gets paid to each? Do you wish there wish there were 25 hours in a day sometimes?

Yes, 25 or maybe even 30 hours would be awesome… and maybe two more of me. It’s really a juggling act and always has been. But I love it and I’ve gotten better at managing my time. I’ve learned sometimes you just have to say no. I can’t complain though because I’m blessed to have the opportunities I have and they all feed off one another.

How does the rise in social media help all aspects of your professions?

Social media is a huge part of today’s world whether you like it or not, and it’s not going away anytime soon.  It’s helped to build my brand and interact with my followers.  It gives them a glimpse of my journey.

Where do you see yourself in five years? 10 years?