The Desert Willow Golf Resort in Palm Desert set the standard for resort-quality golf courses owned by cities in the Coachella Valley.

The Firecliff and Mountain View courses and the accompanying clubhouse opened in 1997 and 1998, respectively and gave a new meaning to a municipal course in the California desert. The original course was Tahquitz Creek LINK, owned by the city of Palm Springs, that opened more than 50 years ago.

After the turn of this century, the city of La Quinta hired Arnold Palmer to design SilverRock  as its municipal resort course. A couple of years later, Indian Wells opened its Celebrity and Players courses that were paired with a 53,000-square-foot clubhouse including the VUE restaurant. There also are four luxury hotels located on site within walking distance of the golf courses.

We previously have played at Indian Wells and SilverRock, but this was the first time for us on the showcase Firecliff course. It is named for a supper club owned by early Palm Desert residents, Leonard Firestone and Clifford Henderson. Former President Gerald Ford took part in the grand opening festivities in 1997.

What the three facilities have in common is first-class service that matches what would be expected at upscale daily play courses such as the Classic Club. Complimentary valet parking is offered and attendants unload your clubs and put them on the cart. After checking in, you can take advantage of the ample driving range and the putting green. 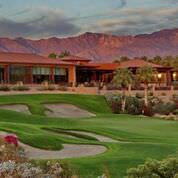 The team of Dr. Michael Hurdzan and Dana Fry designed the Firecliff track to complement the desert landscape. They were joined on the team by PGA pro John Cook, who grew up in Southern California. There are plenty of waste areas in the desert where you can still play an errant shot. From the back tees, there are many holes with forced carries over the desert.

It is similar in design to the Greg Norman course at PGA West that also takes full advantage of the desert with sandy waste areas and ample space between vegetation.

The design team took a page from Pete Dye’s book and set up tee boxes with intimidating views of what appear to be narrow landing areas. You should check the GPS system because most of the holes that require drivers feature ample landing areas. 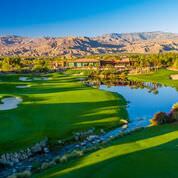 Water is in play on six holes

That’s the good news. When it comes to the greens, that’s another story. Water is in play on six holes (the last three on each side) and most of the greens are surrounded by bunkers (fairway bunkers also are in play on many holes).

The greens are relatively small and have plenty of contour. The practice putting green featured plenty of slope and accurately reflected what was in store on the golf course. When we played, pins were placed on subtle slopes making even a tap-in worthy of careful attention.

For locals, this is a golf course that will remain interesting and challenging throughout the season.

When we played in December, it was in beautiful condition as would be expected. And, a 75-degree December day made it even better.  The course was full when we teed off in the late morning, but we ended up alone in a bubble—those ahead of us were not seen after the first hole, while we didn’t see the group behind us until the 18th hole. That made for a relaxing round for our foursome, which included two businessmen from Orange County. 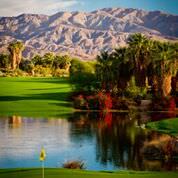 Incidentally, it is one best courses for women in terms of comfort stations. There are two on each side plus both nines finish at the clubhouse. One benefit of a woman on the design team.