It’s easy to get excited when the U.S. Open is coming back to your area. And when the tournament is at Pebble Beach, the excitement meter goes off the charts!

The last time the tournament was in Northern California was 2010 at Pebble Beach and that seems like just yesterday. Next summer, the U.S. Open returns to the Monterey Peninsula from June 13-16.

I was fortunate to be among a group of journalists that got an unprecedented tour of Pebble in early November. Our day involved heading out on the course with representatives from the USGA, as well as Chris Dalhamer, the Director of Golf Course Maintenance for Pebble Beach. 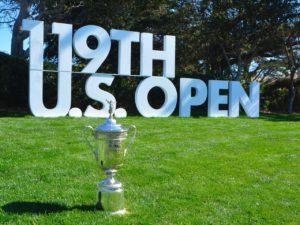 All photos courtesy of Robert Kaufman

The U.S. Open trophy was also along for the day, giving photo opportunities with the trophy in several locations. Being able to walk fairways and out on to the greens was access seldom granted.

It was fascinating to walk on the course and hear Dalhamer talk about how the course will change as the Open approaches. Even though he is behind the scene, Dalhamer may be the most important man for the tournament as it’s his group, in coordination with the USGA, that will make the course into an Open worthy course.

“I really started the day the last putt fell in 2010,” said Dalhamer of the preparation for the 2019 event. “Right now, we are into detail mode for the course.”

The course will play 35 yards longer than it did in 2010 and there were other aesthetic changes as well. For instance, the iconic 17th green has been changed since 2010 as the bunkers on the front left of the hole were lowered so the players can now clearly see the left side of the green.

“It’s one of those holes you just want to make perfect,” said Dalhamer.

Among other interesting tidbits relating to the 1019 U.S. Open is that should there be a playoff, it will be a two-hole aggregate playoff that will take place following the conclusion of the final round on Sunday. It stokes the imagination to think the Open could be decided by playing the 17th and 18th hole, a pair of challenges where strokes can be gained or lost easily. 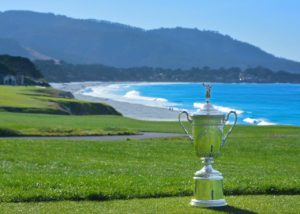 Here are some other facts looking forward:

*Brooks Koepka is attempting to become the second player to win three consecutive U.S. Open Championships. Willie Anderson, a Scottish professional is the other golfer, winning in 1903, 1904 and 1905.

*The U.S Open is open to any professional golfer and any amateur golfer with a handicap index not exceeding 1.4.

*Pebble Beach has hosted the U.S. Open for five consecutive decades and the 2019 Open is the 12th USGA championship the resort has hosted. Pebble Beach will also host the 2023 U.S. Women’s Open and the 2027 U.S. Open.

*2019 U.S. Open weekly and daily ticket options are available online at usopen.com. Questions can be directed to ticketquestions@usga.org or by phone at (800) 698-0661.

ACES will be your source of all things U.S. Open in 2019. Our planned pre-tournament coverage will include several behind the scene stories, such as an in-depth course tour with Dalhamer following the AT&T as the crew kicks into full-Open mode.

Keep checking back at www.acesgolf.com after the first year as we will give you not just tournament stories and information but insight as to where to stay, dine and party during the event!