We were blessed last week to play the Ocean course at the private Olympic Club in Daly City thanks to the generosity of my sister who bought the donated round at an auction.

My bride and I were joined by her former teaching colleague and long-time friend, Clark Fuller (they grew up together) and his buddy, Dave Butler. Staring off in fog that gradually lifted, the course was everything I had expected. I have played the Lake course, where the U.S. Open has been conducted five times, twice.

I learned that the Ocean course once had five holes along the ocean—you can still see the fenced tunnel under the Great Highway—until the Pacific Ocean and storms took them out in the mid-1990s. The course now is routed entirely within the club grounds east of the highway.

The designers took advantage of the elevation change to create some sharply downhill holes and others that climb back up. The greens, as you would have expected, rolled true and were quick. Bunkers are ample around the greens. The course opened in 1924 and has been redesigned several times, including a complete remaking in 2000 by Tom Weiskopf.

As the fog lifted, we could enjoy the views of Daly City and the Lake Merced and San Francisco country clubs. 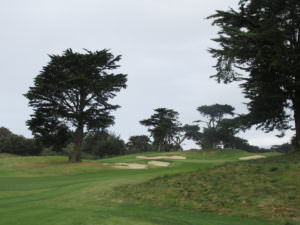 The vista of the Golden Gate Bridge, like what you see on the first hole on the Lake course, opened up as we approached the 17th green.

We decided to pop for a forecaddie, Daniel, who made the round even more enjoyable by taking the guess work out of how to play the holes. His expert eye helped on the green—he’s been caddying since he was 13 and has been at the Olympic Club for six years.

My history with the club goes back more than 40 years. Many years ago, when the Morabito family still owned the San Francisco 49ers, the team celebrated its alumni with a brunch at the Olympic Club before an exhibition game. I was writing sports in those days so my bride and I went to that event on the first day of our honeymoon 44 years ago.