Having an event in the Napa Valley brings with it the perception of a scenic, aesthetically pleasing venue. Such is the case with the Silverado Resort and Spa, home of the PGA Tour’s Safeway Open tournament that takes place Oct. 2-8. It kicks off the PGA Tour’s 2017-18 season.

Playing the course two weeks before the 2015 tournament was as visually as satisfying an experience as I have had on a non-costal golf course.

In immaculate condition, the lush green of the of the course set against the beauty of the south end of the Napa Valley right off the Silverado Trial, makes for a visually stunning round of golf. 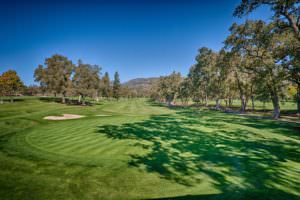 The tournament promises to play well on television and despite playing right around only 7,000 yards, promises to be a stern test of goal.

What the course lacks in distance is more than made up for with the difficulty of the greens. The pros will need to hit the fairways to control their approach shots to the quick greens.

Initially looking at the scorecard, it is easy to think that the winning score may something like 20-under-par given the driving distance this generation of professional golfer exhibits. After two years of play, with the winners coming in at 15-under and 18-under, shows there’s some danger and difficulty looming under the surface.

The front nine starts fairly straight forward and somewhat benign with a par 4, followed by a par 3, but by the third hole the game is on!

The 400-yard par 4 plays uphill with a dogleg left. The approach narrows and there are three deep bunkers – the theme throughout the course – guarding the deep green.

The next hole follows suit. It is not the longest hole, but a well-placed giant oak tree guards the left side of the fairway and forces the golfer to play the right side of the fairway or risk having your approach hindered by the tree. The green has to be the widest and shallowest on the course, leaving virtually no room to go long or miss just short. Choose the latter, another deep bunker awaits.

No. 5 is the first par 5 and, for the bangers, this 550-yard hole presents a great scoring chance, but not without some risk. The pros can get on in two here, but it will require a bomb off the tee over the corner trees. The second shot is a bit uphill and there are, once again, deep bunkers guarding the front. While many will go for it in two, I won’t be surprised to see plenty lay back and take the safer route. 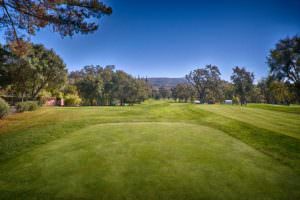 The next three holes are somewhat straightforward, but this area on the course will be a great spot to hangout during the tournament. Standing around the 6th green you are right in the middle of an area that is close to the Nos. 6, 7, 13, 14 and 17. Both restrooms and the snack shack with the signature burgerdogs are right there as well.

The final hole on the front 9 is another par 5 that is reachable, but there is a monster bunker guarding the front and a crazy sloped green awaiting your approach. As is the case throughout the course, you want to be below the hole as putts from the back to front are very dicey.

The opening hole of the back 9 has the greatest disparity between the member tees and the tournament tee as the pros will tee off from an elevated tee just behind the grill and pro shop.

But even with the hole playing at 450 yards, most players will hit 3-wood, wedge into the green.

I would call No. 11 a signature hole for the course as the 200-yard, par 3 plays all carry over water. It is a beautiful hole and is one of the few holes on the course with bleachers behind the green.

The final three holes will add drama to the close of the rounds.

No. 16 is a par 5 that once again can be reached in two, but it is a very deep green and even if the pros do get on with their second shot, birdie is not a guarantee if their ball lands in the wrong part of the green. 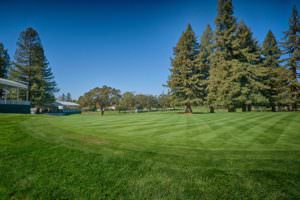 The 17th may turn out to be the hole that is the most fun to watch. Playing around 350 yards with a dogleg left, driving the green seems like a real possibility. When we stood on the tee, we could see six huge Redwoods guard the green that also has a tough bunker complex. But we were told by several people that pros do go over the trees and on to the green with their tee shots. This is a hole I am looking forward to watching.

The 18th makes for a great closing hole. A par 5 that is reachable, it also has some potential danger for wayward shots. I have always felt a closing hole should provide drama and you have it here as the players could get an eagle as easily as a bogey.

The north course at Silverado will provide that drama.