It has got to be tough enough to hit in tee shot on front of a packed stadium setting in front of overzealous golf fans getting to act out one time year.

This is exactly what the PGA Tour professionals face at the Waste Management Phoenix Open each year.

But, add the pressure of being booed for a bad shot and it’s no wonder that the pros struggle hitting their shots. There were a few times all three players missed the green and the boo-birds were in full flight.

I’ve played the hole and it’s not intimidating from a golf perspective. Then again, there were a handful of people when I played the hole as opposed to 20,000 people drinking and screaming.

Among the other wagers are bets on which caddy will step on the green first. It has become known as a horserace in the stadium.

The caddies wear bibs which have the colors of red, blue or yellow, and people latch on to the colors to cheer the caddies on as they race toward the green. But this is a tradition that has taken a hit as the powers-that-be have frowned on the caddy races. It is too bad as twice I saw a caddy sprint for the green after everyone teed off, once carrying the bag and the second time, leaving the bag for his pro player to carry. The closer the caddy gets to the green, the louder the noise. One time the teenager carrying the scoreboard with the group put the board between his legs and started riding it like a horse.

Saturday was the big day, with more than 130,000 people on the course. While only 20,000 fit into the stadium around the 16th hole, there are long lines of people waiting for the general admission seats to open up.

Others just hang out around the stadium and party.

For years, students from nearby Arizona State have led the cheers–and the boos–from a general admission spot close to the tee box.

The tradition of Arizona State students showing up for the weekend adds to the experience. Any ASU alum who comes through is greeted with showers of love, while a University of Arizona alum is heckled, and even a victim of “the newspaper tribute”, where the ASU students all hold up newspapers to read, as opposed to watching the Arizona golfer hit.

The group has established rapport with a number of the tour regulars. No one in the crowd is safe either, as the group will join in unison to persuade some to “chug” their beverage or wolf call at the groups of scantily-clad women roaming the grounds.

As always, Saturday was the craziest day at No. 16. The year I attended the tournament, early in the round Saturday, Jarrod Lyle of Australia rolled one in for a hole-in-one, sending a roar throughout the course. But as the day moved along, both the size of the crowd and its volume would increase. 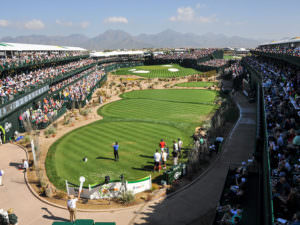 The next pro to get the crowd going was Arizona State grad Billy Mayfair, who came on to the tee box wearing a Pat Tillman ASU jersey. With the crowd cheering, Mayfair nearly got his own ace, bouncing his tee shot off the green, then the pin, leaving the fans exasperated. Mayfair did make the birdie putt.

Finally Phil Mickelson made it to the 16th tee. There is no greater love affair in all of golf than Mickelson and the fans at No. 16.

The chants of “we want Phil,” start when he’s still on the 15th green. As Mickelson walks through the tunnel on to the tee box, it’s as if a rock star has appeared on stage.

Saturday, the endearing masses didn’t get the tee shot they wanted– Mickelson left it 31 feet from the hole–but when he drilled the putt home for a birdie, I thought the bleachers were coming down.

Some of the players have expressed dismay at the circus environment, but many have embraced it. Rickie Fowler, Bubba Watson and Dustin Johnson have all “fed the animals”, throwing hats into the stands.

Watson was heckled in the past when the fans sang the National Anthem and he failed to take off his visor. This year, the masses again sang the Anthem and this time Watson handed out hats.

There are strong feelings, both for and against the 16th hole and the atmosphere that it brings to golf.

This year Tiger Woods returns to the tournament and with the Super Bowl in town the same weekend, you can bet the party will be non-stop. Woods has scored an ace on No. 16 in the past, before there were stands surrounding the green, but there were still a lot of people watching and the sound explosion was legendary.

For my money, it’s something every tournament should embrace, save for the majors.

More people are getting exposed to the game and new fans may be born out of the event.

The 16th hole at the TPC Scottsdale has become a golf icon. It’s taken just another stop on the PGA Tour and turned it into an event. If you ever get the chance to attend the tournament, do it–and make sure you get a skybox ticket to No. 16!