Fall is the favorite season for many Northern Californians so we headed for the Sierras for a couple of rounds of golf in Truckee and Portola  and to check out what’s happening in the resort real estate scene.

Golf was great, although you have to be prepared for weather that changes rapidly. Two days after we played in breezy weather with the temperatures comfortable in the mid-70s, it rained and snowed. Temps were expected back into the 70s a couple of days later.

The real estate market is hopping. Lots are for sale in several resort communities, including Grizzly Ranch in Portola where we stayed. Jeff Brown, owner and general manager of Tahoe Mountain Realty, said the fall is their busy time when buyers who shopped various properties in the summer focus on closing a purchase before the serious snows arrive.http://www.tmrrealestate.com

Jeff’s firm serves the Truckee/Truckee/Northstar areas and is focused on luxury properties. It is the exclusive agent at Grizzly Ranch where 10 lots are for sale. The community, which started out as an ultra-private golf resort, got caught up with investors buying lots to flip them within a couple of years. The recession took care of that strategy so now there are only 46 homes built (380 homes are planned on more than 1,040 acres) and many lots are owned by investors.http://www.tmrrealestate.com/

To kick start the lot sales, Grizzly Ranch now is offering home sites for between $45,000 and $80,000, about 65 percent lower than the asking prices in 2008. There also is a generous incentive package and the flyers note that once seven sites are sold prices will increase 20 percent across the board.http://www.grizzlyranch.com

Grizzly Ranch is in Portola, an easy 45-minute drive from either Truckee or Reno. That drive saves potentially hundreds of thousands of dollars. For instance, home sites at Schaffer’s Mill in the Martis Valley of Truckee start at $300,000.

The resort market, according to Brown, is red hot. In August alone, 178 residential transactions closed—the most in any month since 2005. The average sales price was nearly $900,000. The eight-month total exceeds the annual total in many prior years and the total sales volume of $851 million exceeds the 12-month total for each year from 2007-2012. Average sales price is 13 percent higher than 2015 and tops 2006-2007, the previous high.

What’s more is there are plenty of transactions in escrow in the fall crush.

We did a quick drive-around Gray’s Crossing for the first time in three years and were struck by more than 20 homes under construction and many more completed since our last visit. It was similar at Schaffer’s Mill.

We played two rounds of golf with both courses being in great shape as you would expect in the fall.

Schaffer’s Mill is a private club that only allows public play on Mondays and routinely finds its tee sheet filled. The Johnny Miller/John Harbottle design was in great shape with quick greens.  The front nine runs through the meadows, while the back nine takes you up the mountain side.

The designers took advantage of the terrain to create a challenging and enjoyable golf course. Miller and Harbottle also collaborated on the Genoa Lakes Ranch course.

Grizzly Ranch is built entirely on mountain side surrounded by mountains on three sides so there are plenty of elevation changes.  Most holes play sharply uphill or downhill. The Bob Cupp-design had been named one of the best courses you can play in California. That list includes tracks such as Pebble Beach, Spyglass Hill, Pasatiempo and CordeValle. 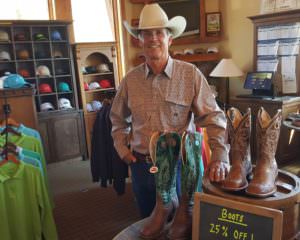 Van Batchelder, the director of golf at Grizzly Ranch, said they have had a record year in terms of rounds.

Grizzly Ranch aerates early—doing so on Sept. 26 this year—so the turf and the greens have time to heal and grow back before the snows come. The team believes this approach allows the golf course to be in better condition when opening day comes next year.

Van plans to keep the course operating through October, while many other Sierra courses will close mid-October and then aerate before the coming snows.

Incidentally, Van embraces the “ranch” aspect. When we played, he was decked out in full Western gear including a cowboy hat. His pro shop is one of the unusual ones where you can buy both FootJoys and cowboy boots. He said he sells about 25 pairs of boots each year.