When Mike Ward took over the Restaurant at Wente Vineyards in the Livermore Valley last summer, he was a well-seasoned chef used to managing a kitchen and preparing exceptional dishes for diners.

What he had not learned to do is deal with the three-ring circus that goes with his job at Wente. That includes the popular concert series that draws 1,000 to 1,500 people per event, many of whom enjoy a sumptuous buffet dinner or dine in the restaurant. That means many hungry diners ready for food at just about the same time—same goes on the catering side for special events or the wineries’ robust wedding business. That means tossing out the window the pacing that is typical in a fine dining restaurant when serving these special events. Over the years, the Wente family has built a reputation for the quality of their food at these large gatherings so it makes for a very busy time. 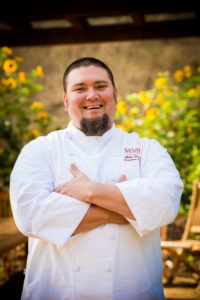 One delightful discovery for Ward was that the team surrounding him at Wente was so well trained that they could execute the big events and allow him to turn his attention to the kitchen and the menus.

The restaurant, which celebrated its 30th anniversary this year, pioneered farm-to-table food long before it became in vogue. The restaurant has harvested from its ½-acre organic garden for years. Master Gardener Diane Dovholuk oversees the garden, working closely with Ward on seasonal produce.

Couple the fresh produce from the garden with the Wente estate-grown beef cattle that graze on the hillsides above the golf course and you have the ingredients for a wonderful meal.

Ward has maintained the well-recognized Wente quality and started to put his own stamp on the menu as Diablo magazine wrote in its May issue when it headlined the restaurant with “Tri-Valley Classic…The Restaurant at Wente Vineyards turns 30, and it’s better than ever.”

That’s saying something and it was written Diablo food critic Nicholas Boer, who happens to be the son of a former newspaper colleague of mine, Joan Boer.

We dined at the restaurant three times over a period of three months thanks to the Wente family’s Christmas thank-you gifts (gift certificates for $25 with a $50 purchase good for wine, food and golf in January and February) that were coupled with a generous gift certificate from my brother.

The expansive patio, which is perfect this time of year, was off-limits in the colder months so we were seated in the main dining room that is elegant with a stone-covered main table that hasn’t changed in 30 years topped by a huge flower arrangement that changes weekly. 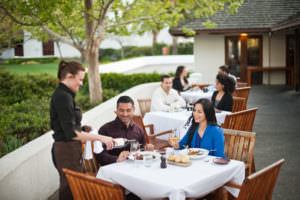 We started with a perfect celebration of my bride’s birthday—18 holes at my favorite golf course followed by a quick clean-up in the restroom and then off to the restaurant for dinner. As one who appreciates a fine bourbon before dinner, the addition of the spirits to the bar menu was a welcome improvement. The wine list has been complemented with craft beers, fine whiskeys and a variety of cocktails. 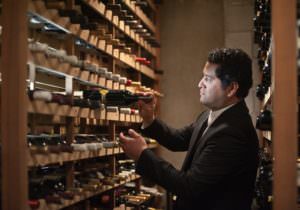 The restaurant always has boasted an expansive wine list with the expected Wente bottles as well as other Livermore Valley wines to say nothing of fine choices from throughout California and the world. This month, for instance, Sommelier Jorge Tinoco is featuring Wente’s Eric’s Chardonnay (named for company chairman Eric Wente) as well as a Malbec from Argentina, 2012 El Enemigo. For wine club members on Tuesday and Wednesday evenings, Tinoco puts together a special list of wines that are offered at half-price. We took advantage of that twice to enjoy some special wines.

We started with the house-made charcuterie platter that was so delicious we ordered it when we returned for the second time. Like a number of chefs today, Ward uses the entire animal—he told Boer that one hog produces 40 different dishes.

We followed that with a delightful Roasted Baby Beet salad with beets of different hues, goat cheese, beet puree and pistachio dust. Ward changes the fruit in season so this month it’s with blue berries—other times it has strawberries mixed in.

We also enjoyed the Crispy Gulf Shrimp with Green Goddess dressing, avocado, sunflower seeds and arugula. Tasting the various salads—the one constant is the Wente classic Caesar—you can see how skilled Ward is at blending flavors and textures.

After golf, I opted for the bone-in Wente ribeye that had been cut off the bone. It would easily have served two people—it was equally enjoyable the next day.

That’s one difference over the years—early the restaurant was so focused on “California cuisine” that you had a really good chance of leaving hungry (I remember the five sprigs of lettuce salad). The Wente family quickly adjusted to substantial portions and now has settled into a sweet spot. 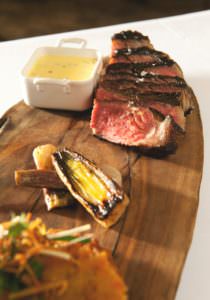 While I could not finish the ribeye, there was no issue with the signature Berkshire smoked pork chop or the sea scallops. The pork chop is a year-round feature—what changes is what Ward pairs with the tender meat. The spring menu takes advantage of the stone-fruit season with peach mostarda and kale over roasted farro.

In February, the pork chop was served with a wild rice pilaf, pancetta and pomegranate piccalilii.

Scallops were on the menu December through February, but served over rice with an Asian spin. This month, they headline a paella with manila clams, Spanish chorizo, Saffron aioli, with cilantro and charred green onions from the garden.

We enjoyed a light and delightful Pomegranate Panna Cotta and a Pumpkin Napoleon in December (it was tough to pass on the Orange upside down almond cake), while we made up for that in February with a lemon layer cake and an orange ricotta cake.

Bottom line, Wente is a wonderful special occasion place and, budget permitting, a great place to visit routinely to enjoy the cuisine that the team rotates seasonally.

The Course at Wente Vineyards, a visually stunning golf experience!