It has thrived in the upscale East Bay community since it opened way back in 1987. Think how many other restaurants have come and gone over nearly 35 years. It anchors the south end of the Danville Livery Shopping Center at 100 Sycamore Valley Road west of I-680 and Danville Boulevard.

The reasons for its success: fresh pasta made daily, pizzas and a seasonally sensitive menu. Mix in generous drinks, a good wine list, efficient and friendly service and it made an ideal choice for our Christmas lunch instead of riding BART an hour each way to our traditional spot, the Rotunda in Neiman Marcus on Union Square. My daughter and I opted for a 20-minute drive instead and were delighted we did. She made a reservation (a good idea on the Wednesday before Christmas) and we were seated promptly.

After ordering drinks, we perused the menu and several appetizers looking interesting. The meatballs, fried polenta cakes and deviled eggs all were tempting. We settled on a favorite for comparing Italian restaurants—fried calamari. I had noticed what appeared to be onion rings on a nearby table and was surprised when that was the calamari. Largest pieces of squid that I have been served in a restaurant. 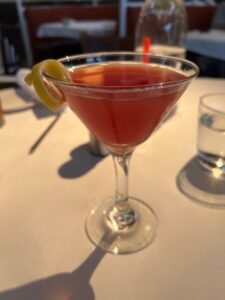 The pieces were lightly breaded and served with a lemon aioli sauce or a spicy cocktail sauce. Both complimented the perfectly fried meat well.

My daughter, a fan of gin cocktails, loved her Pomegranate Ginger Martini. I took a sip and it was delicious. My choice was a favorite bourbon, Knob Creek, served with one block of ice. It was a generous pour. 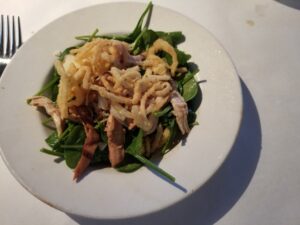 Trying to balance our diet, we ordered the spinach salad that topped with a warm Balsamic vinaigrette, fried onions, shaved Parmesan and shredded chicken. Salads were offered in a lunch and entrée portion so we opted to split the entrée size. It was more than enough and superbly executed. My daughter observed that after the salad and the calamari we could have gone home.

She chose the Gemelli, a twisted pasta with spicy sausage, pancetta, Swiss chard in a garlic, Pecorino and cream sauce. The sausage was a bit zippy for her—fine for me when I tasted it. I would order the dish on a return visit. The pasta menu also offered tortellini, spaghetti with meatballs, rigatoni and chitarra (sautéed prawns with saffron, garlic, Calabrian chili, basil and tarragon). 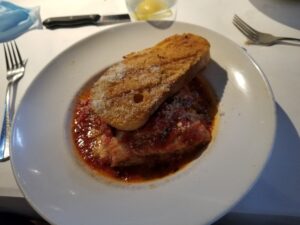 I decided to try their lasagna. Our server warned me it will hit the table with a thump and it did. The large portion was accompanied by toast topped with Parmesan.  Given how much I already had eaten, I worked my way through less than half of it and enjoyed it for lunch the next day. A very nice rendition of the traditional dish with three cheeses plus beef, pork and spinach.

I opted for coffee instead of dessert, while my daughter enjoyed a splendid white chocolate bread pudding topped with a bourbon caramel sauce. Save room if it’s on the dessert menu. The homemade desserts included Italian classics panna cotta and tiramisu as well as gelato and a flourless chocolate torte. 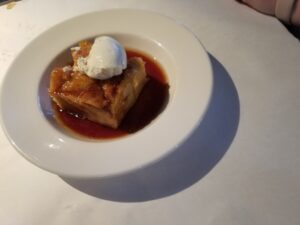 During my newspaper career, I entertained clients several times at Piatti, but had not been there in more than 15 years. It was well worth the return visit.