When it comes to championship golf courses located conveniently for visitors to South Lake Tahoe, there are just two choices—both good.

There’s the famed Edgewood course with its three holes along Lake Tahoe (the site of the American Century Championships). And then there’s the Lake Tahoe Golf Course at the other end of town off Highway 50 between Meyers and South Lake Tahoe.

Given the price point (Edgewood is a resort golf course with prime season rates of $280), many locals head for the well-conditioned and busy Lake Tahoe course ($89 prime time, $59 for an early start with special rates for locals including a cart). Kevin Sommerfeld, the general manager, said there were more than 8,400 rounds played in July with golfers teeing off as early as 5:30 a.m. and as late as 7 p.m. We played with two senior locals who are regulars on Mondays. Chatting with a twosome behind us who also had a home locally, they volunteered that the course was their favorite in the area.

It should be noted that there’s an abundance of championship courses on the north side of the lake starting with Incline Village and continuing with the wonderful Truckee area courses plus Squaw Creek. The same is true if you head east down either Kingsbury Grade or Spooner Summit (Highway 50) into the Carson Valley where nine courses await.

We played the course on a late August day with the temperature in the mid-70s and a steady, light wind. The greens were in excellent shape and rolling quickly.  Designer William Bell took advantage of an open meadow for 14 holes with four others playing into the woods north of the Upper Truckee River. 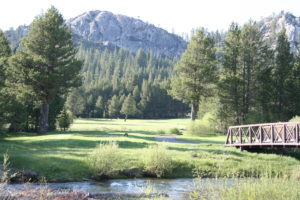 The vistas from the meadow are sensational with mountain views framing most holes. That’s particularly true on No. 10, which plays back over the river with the sheer rock of the “pie shop” framing the hole. It’s so striking that the 10th tee is the wedding site (tees are moved up on wedding days, typically every Saturday during the summer).

The fairways were firm and fast. Except for the four holes across the Upper Truckee River, the fairways were wide, with ample landing areas and you could find errant balls on many holes. Not true if you missed into the wetlands—write it off.

You start and finish the front nine with par 5s so warm up, while No. 18 also is a par five. Both 9 and 18 feature a creek that crosses the fairway. Designer Bell took advantage of the rivers and other waterways to bring it into play on half of the holes with crossings required on two par 3s, two par 5s and 3 par 4s.

The most striking set of holes is 10, 11 and 12 goes into the forest over the river. Sommerfeld noted that if he gets through there at even par, he’s celebrating. That concludes with a 90-degree dogleg left that favors a draw with the driver from the tee. It plays 411 yards from the tips. The course is about the same elevation as Lake Tahoe at 6,200 feet. 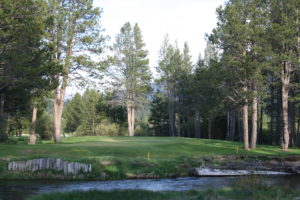 We thoroughly enjoyed our round and have the Lake Tahoe course on our list for a return engagement. It’s managed by American Golf Corporation, which also manages several Bay Area courses (Tilden in Berkeley, Monarch Bay in San Leandro and Summitpointe in Milpitas).

The course is located on state recreational land and officials are currently working on a plan to re-route the Truckee River to its natural meandering path with wetlands and a flood plain to create more habitat. It was straightened through the meadow when the land was ranched in the 1930s. The plan would take out five holes across the river and relocate them to state land southeast of the current course. Sommerfeld pointed out that there’s plenty of elevation change on the new land so it would add that feature to the course.

The goals are to restore the river, so it limits sediment flowing into Lake Tahoe, improves habitat and maintains the 18-hole championship golf course. It’s estimates that visitors play two-thirds of the rounds.