In the city of Las Vegas, where the imagination can run unchecked, the development of a concept golf course seems a perfect fit.

Walters Golf is the leader of golf in Las Vegas and with the construction of Royal Links, along with Dye International, they have ventured into an area that few others have by creating a conceptual 18 holes of golf.

The plan was straightforward–create a course that reflects the spirit of play found in the British Isles. But the group took it a step further, designing each hole to replicate famous holes from the courses in the British Open rotation. 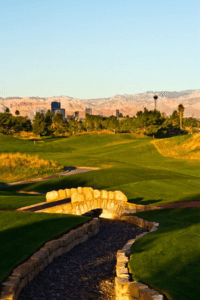 What they have done is created a masterpiece that allows for a sensory round of golf, involving not just playing the course, but embracing the history of the game and the Open Championship.

From the time you turn off the main road and travel through the gate of the property, you feel transported “across the pond” to the place where the game of golf was invented.

The clubhouse is a castle, creating the feeling of being in the British countryside. After checking in, head over to the driving range where Scottish music is piped in to further set the mood.

Once out on the course, there are monuments at every hole, explaining what course the hole is inspired by, as well as the history of an Open played at that course.

The yardage book is more of a storybook. In addition to explaining the hole, it also tells a story.

Please Note: Royal Links may not be a course for the high handicapper. On a good day, it can be a five-hour round and, with the amount of gorse and heather throughout the property, lost balls can become commonplace.

General Manager Charles Bombard, one of the sensational staff at the course, warned us that everything plays uphill. Initially, you might think Bombard had a wee bit too much scotch as you look over the apparently level course, but by the end of the first hole you understand.

Our group of fairly quick players took over five hours to get around the course without waiting to hit at all. Still, soaking in the atmosphere made it seem like a much quicker round. If you are a golf fan and enjoy watching the British Open each year, then Royal Links is a must-play.

The two highlights of the course are No. 8 and No. 10. The 8th hole is a 137-yard par 3 that is inspired by the “Postage Stamp,” at Royal Troon. Former Open champ Willie Park described the hole back in the late 1800s as “having a pitching surface skimmed down to the size of a postage stamp”, and the moniker has been used ever since.

The smaller green is made even tougher by the looming, seven-foot deep bunker on the left side of the green. Yes, it is every bit of seven-feet deep and, whether you find the bunker or not (I did not), it is worth walking down the stairs into the bunker.

It is an ominous feeling to be standing down at the bottom trying to figure out how in the world you can get out. 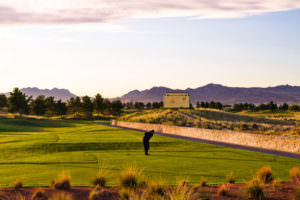 The 10th hole at Royal Links pays homage to the “Road Hole” at St. Andrews. A 466-yard, down-wind par 4 (you have to play this hole from the tips for the full experience), the hole offers the golfer the same decisions you face at St. Andrews.

How much of the hole do you cut off by going over the corner, flirting with out-of-bounds, down the right-side of the hole? That is the question when you are standing on the tee.

Even if you find the fairway, your work is hardly done, as the road (and the stone wall that cuts right behind the green) await.

Throw in a ball-gobbling bunker protecting the front and you get the full experience the pros face at St. Andrews.

The Open this year is taking place at Royal Liverpool and the course is represented by No. 4–a monster 572-yard par 5, a hole with no bunkers, but with very few flat lies along the fairway.

No. 12 is another great hole and, at 453 yards, it is one heck of a par 4. The dogleg right adds to the difficulty of the hole, as does the approach to the elevated green.

The hole is inspired by the 6th at Royal Birkdale and is one of the most talked about holes on the Open rotation.

In fact, one year the Open was held at the course, only four birdies were made on the hole over two days and there were 177 over-par scores registered.

The 16th–a 438-yard, par 4 inspired by the 15th at Carnoustie–is also a fun hole, as six well-placed bunkers throughout the hole offer an even greater challenge.

In fact, the final three holes offer a serious challenge to finishing strong. The 17th is a 203-yard par 3 patterned after a hole from Royal Troon. Swirling winds combined with five bunkers around the green make it a tough hole. 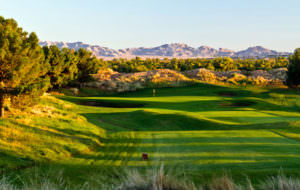 Finally, the 18th, a 493-yard par 5 into the wind and modeled after No. 15 at the Old Course, has 13 bunkers, including a monstrous one short of the green. It is a three-shot hole with no rest until the ball is in the bottom of the cup.

The tee boxes from start to finish are some of the most immaculate ones I have played.

After the round, enjoy a pint and a bite at Stymie’s Pub, an authentic re-creation of a British pub, serving traditional fare like fish and chips, bangers, as well as breakfasts, salads and sandwiches.

If you have never been to Great Britain or are not planning a trip, Royal Links may be the closest thing to playing any of those courses.