Located in the beautiful Dehesa Valley about 30 minutes from downtown San Diego, the Sycuan Golf Resort is an easy getaway from visiting golfers or locals.

The resort boasts 36 holes of championship golf designed by Ted Robinson in 1980 plus Pine Glen, a par-3 course that is easily walkable (carts are available for all three courses).

It’s one of three Indian casino resorts in the broader San Diego area.

The Barona resort, located in Wildcat Canyon, is a bit farther from downtown, but puts you in another world with nature surrounding the golf course and casino/hotel. Moving north to the wine country in Temecula, there’s the Journey at Pechanga, the dramatic Arthur Hills design at the just expanded Pechanga resort.

Pechanga is a favorite destination for fundraising golf tournaments and hosted 29 LPGA pros the day after the ANA Inspiration major tournament in Rancho Mirage.  The Kore Pro-Am was held for the sixth year at Pechanga.

Barona has been the site of professional tournaments as well as is routinely used as a qualifying site for the U.S. Open and top amateur events. It is ranked among the best tribal resort courses in the country and is a stern challenge at a 140 slope from the tips.

Carlsbad, north of San Diego along the Pacific Coast, is home to two exceptional resorts, the 36 holes at iconic La Costa and the Arnold Palmer-designed 18 holes at Aviarra (home of the LPGA’s KIA Open). Both can be stiff tests.

By contrast, Sycuan is imminently playable with the courses playing at 6,500 yards and 6,650 with slopes of 128 from the tips. Robinson’s design took advantage of the Sweetwater River that runs through the property and comes into play on many holes. 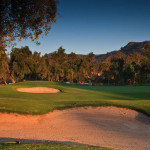 One of our rounds took place during the severe drought of 2015 when the wells serving the course started to go dry. The superintendent maintained only the greens and tees, lending new meaning to fast and firm fairways. Since that time, the golf course team has eliminated turf area and minimized water use on the courses.

During a recent trip to La Mesa, we dropped by the picturesque resort for both lunch and dinner. At lunch, we ate in the Red Tail Grill, which is open for three meals daily. It features a patio as well as views of the water features surrounding the pro shop (there are several water features on the golf property).

I selected the steakhouse salad with chicken ($13) and a delicious cup of vegetable beef soup ($4)—large pieces of beef and fresh veggies. The steakhouse salad was built with chopped iceberg, tomatoes, red onion, cheddar, croutons with small chunks of chicken. It was a large portion.

The same was true for the Thai pork noodle bowl that my bride ordered. It was tasty with appropriate Thai spices and more than she could finish. 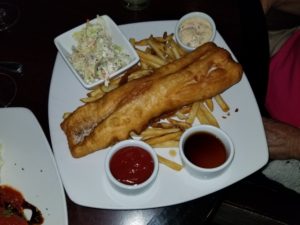 When we enjoyed dinner in the bar, so we could watch highlights from The Masters, the same trend held true—large portions. We would recommend, unless you are really hungry, just go for the entrée. 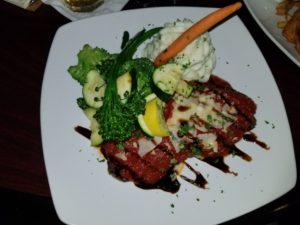 I enjoyed meatloaf smothered in a sweet Marinara sauce ($19) that was served with mashed potatoes and seasonal vegetables. I did not clean my plate.

My bride opted for the fish and chips—a huge piece of battered cod served with honey mustard slaw and French fries. She concentrated on the fish and left both the slaw and some fries.

You can spend more for dinner—steaks with two sides were $31-37. Overall, prices are reasonable and portions large—a good value.