Since its opening 1998, the Course at Wente Vineyards has built a reputation as an excellent venue for corporate events, charity golf and people wanting to play a quality course with first-class service. When it comes to must-plays for visitors to the Livermore Valley, Wente tops the list.

Celebrating 20 years, it’s worthwhile to look back as well as forward as the course enters its third decade.

Back in the mid-1990s, the Wente family knew a quality daily fee golf course was a critical amenity to add to the mix in the Livermore Valley wine country. They had been pursuing their vision to enhance the area with more acres of vineyards and more wineries as well as other assets to improve the local economy and quality of life. Phil Wente said that they would have welcomed a private investor, but they had not found anyone interested.

Earlier, when they controlled what is now the Ruby Hill Country Club, they had been working with Jack Nicklaus, Phil said. Once Jim Ghielmetti and Signature Properties took over and started processing the plans for the development through Alameda County, the Wente’s turned their attention to their property on Arroyo Road. Ruby Hill opened in 1996. 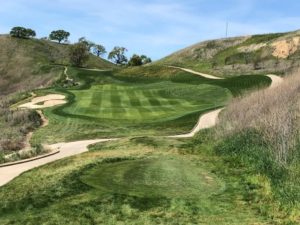 The family already had decided that the area did not need side-by-side Jack Nicklaus courses and moved on to The Shark, Greg Norman, and contracted with him to design the course.

Norman’s routing took masterful advantage of the terrain with many elevation changes. This is not an easy course to walk unless you are in great shape.

The views from the first tee of Cresta Blanca and the Del Valle Reservoir is sensational, but arguably are topped by the vista from the 10th tee that overlooks the entire valley.

Phil said that having Norman as the designer added immediate credibility. Indeed, the Wente course shows up on the lists of the best Norman courses you can play. He only has two public designs in California—Wente and his desert track at PGA West in La Quinta—nice company. The Australian has designed first-class courses all over the world. As Phil observed, Norman’s golf game can still be very competitive, he just likes his business interests better.

The course, from the beginning, has been complemented by the excellent Wente food and beverage service through its restaurant and catering operations. That’s made it an excellent spot for corporate golf outings as well as when it was showcased during the three Wine Country Championship events conducted there on the Nationwide Tour (now the Web.Com Tour).

This year, the team repaired the landslide damage on No. 6, the uphill short par 4. They extended the fairway all the way to the green, added green bunkers on the left side to widen the landing areas, and lessened the sharp slope on the false front. Previously, the steep slope short of the green was fescue with plenty of ground squirrel holes. If you found yourself there after a short approach shot, good luck getting it up and down. The other change extended fairway grass about 15 feet up the right slope that formerly was all tall fescue. 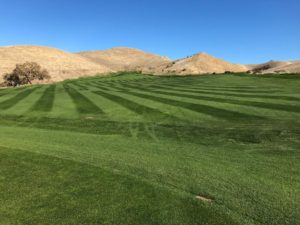 Slide damage on the driving range was repaired by redoing the entire hilltop facility. That’s another upgrade.

Moving forward, Cabe Jones, the director of golf, is focused on expanding the membership program. It’s an interesting balance—if you are only interested in golf as one friend of mine is, Wente is perfect. The golf course is fresh every day and both a challenge and delight to play. Couple it with the offerings at the grill or the restaurant and you are set. Plus, it’s $500/month with no food and beverage minimum as is the case at most country clubs.

Incidentally, the grill is so popular that 60 percent of the patrons are not golfers.

If you want the extra amenities of a country club—locker room and fitness center and private access most days, then it doesn’t fit as well.

Cabe said they offer special events for members and also have two tournaments every year. They also will work around days when the course is bought out for a special event by allowing members out early or late on those days when there’s no public play.

The last two years, with the unemployment rate dropping and labor costs climbing sharply, they have raised rates so it’s now $149 on the weekends (up $20) and $119 during the week.

This year, they’ve also welcomed a new superintendent after the previous one left for a great country club job. His understudy, Chris Eckstrom, took over this year and is starting to put his stamp on the course.